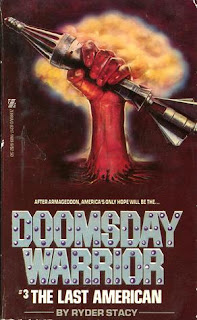 I can see how the Doomsday Warrior series could lead readers down the rabbit hole of obsession. Despite the goofy characters, the comic book vibe, the clunky writing, with this volume the series already elevates itself above others of its ilk, with a definite attempt at creating a sort of mythos. Embracing a spirit that is positively Nietzschean, author duo Ryder Stacy put their protagonist Ted Rockson through the paces in The Last American; whatever doesn't kill Rockson literally makes him stronger, and by the end of the novel he is a very different character from the one we first met two volumes ago. In other words, the authors aren't content to stay in the rigid "nothing ever changes" confines of the genre.

But then, the book's still pretty stupid at times. Ryder Syvertsen and Jan Stacy must've really traded off on the writing, because again there's that terrible dichotomy: one half of the book is clunky and addle-headed, with sometimes-lame writing and a hell of a lot of misspellings. The other half is pretty great, though, veering into psychedelic territory in a big way. From what little is known about the authors, they both were college students in the late '60s, so I think it's safe to say they were involved in the psychedelic scene. The first two books in the series got pretty far-out, but The Last American gets way out there, which is a good thing as far as I'm concerned.

We meet back up with Rockson -- aka "The Ultimate American," aka "The Doomsday Warrior," aka "Rock" -- as he's out on a research mission with some scientists. The party is attacked by big mutant spider-type things and Rockson's hurt in the attack. Injected with venom, Rockson's near death and must be carried back to home base of Cenutry City. There he is asked by the doctors to use his own mind to fight the infection. This is just the first of the psychedelic touches in the novel, as we journey into Rockson's own mind as he heals himself. This is also the first touch of the Nietzschean spirit of the tale, as Rockson emerges stronger than before.

Meanwhile, the far-strung rabble of the American collective is planning to meet together for the first time, each city and village sending representatives to vote on a new president and constitution. Rockson of course is elected to represent Century City, and takes with him Chen, the Chinese ninja martial arts master. Also elected to go are an elderly professor and a middle-aged lady who is highly ranked in Century City's civic arena. So again we have another section where Rockson must test himself against the mutated environs of post-nuke 2089 America. The series is very repetitive in a way, with each book sort of following the same template.

And to further the repetition of previous volumes, we still cut back and forth between Colonel Killov, KGB master, plotting against his Soviet fellows, among them Premiere Vassily and President Zhabnov. Killov has become a full-on monster, a sort of post-nuke Howard Hughes; he doesn't bathe, doesn't eat, doesn't do anything but sit around and plot his vengeance as he pops various pills. Last volume Killov attempted to assassinate Vassily; this time Zhabnov sends assassins of his own after Killov. But the man has become death itself, and makes the reader anticipate the day when we finally have a face-to-face confrontation between Killov and Rockson.

Also appearing from the previous volume is Kim, daughter of the man who hopes to become the first elected president of post-nuke America. Kim as you'll recall was the captured beauty who gave her virginity to Rockson while the two were locked up in twin cages. They're in love and Rockson can't wait to see her again. However the only purple-prosed sex scene in The Last American comes from an awesomely unrelated-to-anything development where Rockson, on the trip to the presidential committee meeting, scouts ahead and comes upon a village of Amazon beauties.

The women hate men -- their bible is a pre-war feminist tract titled Man, The Enemy -- but they use them long enough to impregnate each of the women before killing them. Rockson comes upon a pile of (male) skulls and escapes, but not before one of the beauties catches hold of his hybrid animal as it charges away. Rockson fights her off and takes her to a remote spot, where of course they soon get busy. After which Rockson heads back for the rest of his party, the whole Amazon incident just sort of brushed off. Like I say, it had nothing to do with anything, but damn it was fun.

An unusual thing about The Last American is there isn't much action for the duration. Rockson doesn't even fight "the Reds" until toward the very end of the book -- as expected, the presidential committee is attacked by the Russians and a megaton warhead is dropped on the place. Rockson's hit by the blast -- again, it doesn't kill him -- and he awakens in the hut of a towering mountain man who calls himself Mount Ed. Rockson is burning to find out what happened to Kim; eventually he discovers that she and her father, both nearly dead from radiation poisoning due to the blast, were taken away by the mysterious Glowers.

Here the novel goes full-tilt into the realm of psychedelia. The Glowers are mutants who speak telepathically, meaning that their dialog IS ALL IN CAPS. Their glowing bodies are twisted so that the internal organs are on the outside. Their powers are cosmic, to such an extent that they can change reality and even suck the radiation out of infected humans. They travel about on land ships, the sails apparently driven by cosmic winds. When the Glowers first rescue Kim and her father, there's a frankly awesome scene where the Glowers power their ship on through the night, and their bodies glow against the vibrant hues of the post-nuke starscape; of anything I've ever read, this scene comes the closest to capturing the feel of a blacklight poster in print.

It's while tracking after the Glowers that Rockson has his only fight with the Reds in the novel. Cornered in a desolate patch of land, they're attacked by around 40 Soviet troops in these glider-type contraptions. One thing about the Doomsday Warrior series is it definitely won't appeal to those who like their men's adventure grounded in reality or accurate weapons detail. Ryder Stacy can't even get their own created weaponry correct; early in the book it's drilled into us that the Century City-created "Liberator assault rifles" only fire clips of 15 rounds, but during this scene it's repeatedly stated that Rockson is firing a clip of 50 rounds. Regardless, it's a fun scene, with the patented gore of this series's action scenes -- lots of guts exploding and showering to the ground as the various Reds are blasted apart.

The novel finishes on another psychedelic scene; the Glowers arrive and pick up Rockson and Ed. Due to their omniscience they not only know who Rockson is but also where they could find him. Kim, still in a coma, refuses to heal for some reason, and the Glowers know that Rockson can save her with his love. This entails an elaborate scene where Rockson mentally joins up with the Glowers's collective entity and they all journey into the pits of Kim's soul. We are far beyond the limits of the men's adventure genre here.

After saving Kim -- her soul was imprisoned in a time warp, it turns out -- Rockson comes out of the collective mind entity feeling more powerful, more in tune with the cosmos. The Glowers inform him that he is capable of telepathic powers, and advise him to cultivate his talents. Again, the authors are building toward something, with the series coming off like a post-nuke Dune, Rockson its Maud'dib. Another nice change of pace with this series is its heavy continuity; there are many references to the previous two volumes, which gives it all the feeling of an epic.

Anyway, I really enjoyed The Last American, and I'm happy that as of now I finally have all 19 volumes of the series -- and they weren't easy to find.
Posted by Joe Kenney at 6:30 AM

Geez, thanks a lot, Boss.

Your review of the story finally pushed me over the brink, so now I HAVE to start collecting this series.

Tex
(good thing I had a bookcase built just for Men's Adventure books!)

I got lucky and found all of those back in the days before the internet, where I just had to haunt used bookstores and couldn't go to ABE or Amazon Marketplace. I also scored all of the Butcher series that way ('cept #17, which I had to go to ABE for) and the war-against-the-mafia era Executioner. But I hardly ever see Doomsday Warriors in the used bookstores anymore... people must be scarfin' those bad boys up. I know they got me through many a study hall back in high school. Yep, they're kinda lunkheaded, but they don't let up! Love 'em. I can only imagine what the books-on-tape versions sound like... I've heard they're hilarious.

Tex, I hope you enjoy them.

Zwolf, I know what you mean. I've never seen a Doomsday Warrior in a used bookstore. But then, I never saw them back in the day, either, at least the early ones. I'd always see copies of the book at school, but could never find #1, so I gave up on the series.

I think that's why Craig Sargent's "The Last Ranger" series became my favorite -- I got in on the ground floor on that one. (Sargent apparently was another psuedonym of Ryder Stacy, though it might've just been Jan Stacy by himself, there's no definite word.)

I've recently heard some of the Graphic Audio adaptations of Doomsday Warrior. They are very much OTT. In a way it's like listening to a video game. They have a full cast and an arsenal of sound effects, and they do good work with making it sound like "a movie in your mind," as the Graphic Audio slogan goes. Also the soundtrack is a mix of synthesizers and rockin '80s-style heavy metal guitar, which is a very nice touch.

I loved Last Ranger... I didn't know that was also Ryder Stacy. Cool! I've got all of those, too... haven't read the last few volumes. I probably need to start all over again with that one, which won't be bad - I remember being glued to those. Also kinda liked Traveler (although those got kinda wacky as they went, with people riding giant housecats 'n' such) and The Outrider series was kinda cool, albeit somewhat goofy.

Now to track down the other 14!

Tex
(ya see what ya started, Boss?)