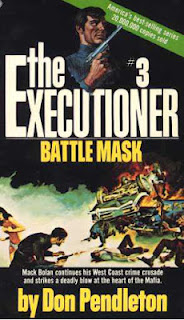 With this volume of the Executioner, the mythos of the character finally begins to evolve. Mack Bolan is back to being the lone wolf he was in the first volume, hitting the Mafia hard and without mercy. Reading Battle Mask, you also get an understanding why Don Pendleton, several years later, had so much bitterness toward Gold Eagle Books, who had purchased the rights to his character. For the "Mack Bolan" of those Gold Eagle novels bears little resemblance to Pendleton's original.

This was also one of the "old" Executioner novels I had as a kid in the '80s. I no longer have that particular copy, but I'm sure the one I had featured a logo emblazoned across the top which stated "Soon to be a major motion picture starring Burt Reynolds." This has always stuck with me, because shortly after buying that copy of Battle Mask I saw Burt Reynolds's craptastic 1986 film Malone in the theater, and throughout I kept saying to myself, "That guy ain't no Mack Bolan." I tried reading Battle Mask a few times back then, but I just didn't get it -- I wanted Mack to fly over to Beirut or something and start wasting terrorists, as in the Gold Eagle books.

Still on the West Coast after the disastrous finale of the previous volume, Bolan realizes that no matter where he goes, people will know who he is, thanks to media coverage. He figures his best gambit is to get some facial-reconstruction work done. To this end he visits an old 'Nam pal who happens to run a plastic surgery clinic in a small Californian town. Meanwhile the cops and the Mafia are closing in. Bolan's target from the previous book, Julian DiGeorge, Los Angeles mob bigwig, sends out his enforcers in an effort to close a trap on the Executioner.

Bolan displays his bad-assness by shrugging off any drugs after the painful surgery, and in fact is escorted out of the town posthaste by the Gary Cooper-esque sherriff, who don't want no trouble in this here town. Too bad, because the mobsters spring an ambush on the men as they're leaving. This entails an elaborate action sequence where Pendleton again displays his mastery of the craft. Whereas the later Gold Eagle books would get bogged down in narrative-halting gun porn, describing the origin and firepower capabilities of each firearm used, Pendleton instead just writes an action scene, and he does so very well.

But as proven in earlier volumes, Pendleton shows and tells. After this huge battle sequence we get a chapter recapping everything we just read! Anyway the mob's presence results in the destruction of the small town, but Bolan himself is able to escape, and no one knows he's gotten a new face. LA cop Carl Lyons, from the previous novel, is still on the case, trailing Bolan despite his growing respect for the man. Like Bolan, Lyons would become a vastly different character in the Gold Eagle books.

When we meet Bolan again he's already infiltrated into DiGeorge's estate, posing as a lone wolf mob enforcer. He's also busy putting the moves on DiGeorge's pretty daughter, and though it's intimated the two are friendly -- DiGeorge meets Bolan when his topless daughter is laying on Bolan beside the pool -- Pendleton doesn't elaborate on the details as he did in the first volume of the series. Using his own moxie as a sort of Mafia badge, Bolan's able to ingratiate himself into DiGeorge's army, eventually becoming so beloved to the man that DiGeorge considers nominating Bolan for full-on Mafia membership.

During this Bolan also works as an informant, calling Lyons with information; Lyons suspects this stranger calling him with intel is none other than Mack Bolan, who everyone now believes dead. Also introduced is Hal Brognola, a Federal agent who becomes Bolan's sort of boss in the Gold Eagle books. Ironically, Pendleton doesn't even describe Brognola, and to this day I have no idea what the character is supposed to look like; I don't think I've ever seen him described.

Lurid stuff develops in the character of Pena, DiGeorge's chief enforcer, who has been tasked with bringing back Bolan's head. Lying low after the small-town battle, Pena gets wind that Bolan might've gotten some facial surgery, and so captures Bolan's old plastic surgeon friend. He tortures the man to death in the first "turkey doctor" instance that would eventually become a staple of the series -- the name derived from mob "doctors" who get "turkeys" to talk. I know the name sounds goofy, and no wonder as it's a straight-up Pendleton invention.

Once again there are some great action scenes, in particular when Bolan discovers that Pena's out there and that he's got the "blueprint" for Bolan's new face. Bolan races against the clock to kill Pena before Pena can get the blueprint to DiGeorge, and thus ruin Bolan's cover. The finale sees a climatic battle in which Bolan turns DiGeorge's own soldiers against him, leading to utter chaos on the DiGeorge estate.

Pendleton delivers another taut narrative that moves at a steady clip; I think I read this book in about a day. I've discovered that Pendleton's novels are incredibly quick reads. And again I do admire how he never delves into the nauseating gun-porn of the Gold Eagle books: guys here just shoot "guns" and etc, meaning there are no sentences and sentences of firearms description. Hell, Pendleton proves himself a bit uncertain about guns -- toward the end of the book there's a scene where Bolan puts a silencer on his revolver. This is an impossibility!

But who cares, when a book is as enjoyable as this.
Posted by Joe Kenney at 6:30 AM

Battle Mask is the first Pendleton Bolan I ever read, probably some time in junior high, after I had already discovered Able Team and Phoenix Force. I agree that Battle Mask is fantastic, short, brutal read. I feel like this is the first "true" War Against the Mafia book, where Bolan (and Pendleton) really hit their strides after the initial shakedown cruises of #'s 1 & 2.

Also, like you say, the book starts bringing together Hal and Carl and we begin to see the seeds of what will be the "WAtM Machine" of later books, with Hal feeding Bolan information and Lyons becoming a full-blown ally.

To me, this is the book were Bolan starts hitting his groove. The action scene when Bolan tracks Pena down on the mountain road was classic. The shots to the head, even when the target is obviously dead already, was just a big FU from Bolan to show the powers that be they shouldn't have done what they did to his doctor friend. To me, that just shows that Bolan is human and can get pissed. I thought the ratio of story to action was well balanced.

I'm only 3 books into my re-read of the original series but this is my favorite so far.

I've always loved the original Don Pendleton penned Mack Bolan books over the Gold Eagle ones - they're written much, much better, in my opinion. I just finished re-reading this one today and remembered why I liked it so much. The parts where Bolan takes on the persona of a Mafia bad-guy and gets in good with the lower echelon soldiers are just great. Pendleton's writing has Bolan fitting in with the lowest cadre of baddies but never lording his (believed-to-be) status over them. To them, he's just another one of the guys. Especially the relationship he forged with Benny Peaceful and the final, albeit brief, one he had with Philip Honey Marasco. I think this kind of thing is real exciting - because, even Bolan doesn't know if his true identity is going to be discovered soon or not. And just to point out, Bolan does drive off into the figurative sunset with the mobster's girl in the end. You know their first night in whatever hotel they stopped at was going to be hot!