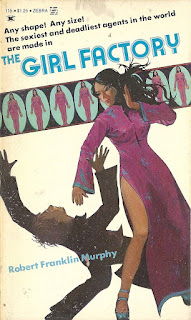 The obscure Girl Factory series is basically The Baroness meets The Enforcer. It’s about a sexy (and oversexed) female secret agent, with a bit of a sci-fi cloning overlay. The three-volume series was published by Zebra but copyright Script Representatives, an outfit that was also responsible for The Butcher and The Big Brain. “Robert Franklin Murphy,” then, is no doubt a pseudonym, and it is still unknown who in fact wrote the series – or even if the same author wrote all of the books.

The three volumes of this series are scarce, in particular the last two, and for a while I’ve wondered if they would be worth the hunt. Unfortunately, friends, I’m here to report the same sad news as I did for another scarce, hard-to-find series: just like The Inquisitor, I’m going to suggest that you spend your time in more fruitful pursuits than tracking down the three volumes of The Girl Factory. That is, if the other two are as boring and slow-moving as this first one was. Somehow, in some inexplicable way, Murphy has taken a story about a sexy Eurasian spy-babe, a Tibetan monestary straight out of Lost Horizon, ancient aliens, an Illuminati-like organization, and cloning, and has turned in a book that’s about as exciting as watching the dust form on a windowsill.

Whoever Murphy was, he (or she) has an almost literary style – there is a bit of polish to the writing, at least when compared to the genre norm. And yet the book lacks the spark one expects of the genre; it’s all presented so mundanely. Even the sex scenes, which the cover copy overhypes, are more so of a “literary” bent, lacking the uber-description of similar scenes in The Baroness. For that matter, the sex scenes are over and done with in a few sentences, as compared to the paragraphs and paragraphs of hardcore screwin’ in The Baroness. While some might prefer this, the least Murphy could’ve done was ramp up the action scenes in compensation. He does not. There’s hardly any action in The Girl Factory, which mostly just features heroine Su-Lin Kelly wandering around the globe in her pursuit of something called the Quantum Growth formula.

Anyway, Su-Lin Kelly is the aforementioned spy-babe; she’s an exotically beautiful (and big-busted) Eurasian in her early 30s; like Penelope St.-John Orsini, aka The Baroness herself, Su-Lin is known globally as a jet-setter and keeps a posh penthouse on Park Avenue where all the beautiful people like to go have parties that turn into orgies. And like Penelope, Su-Lin is also a kick-ass spy, one who uses her jetsetter credentials as a cover. Also like The Baroness, Su-Lin has a sort-of team at her disposal: there’s Joe Zen, massively-endowed sidekick who flies planes for Su-Lin and has sex with her when ordered to – though he must make it look like rape, fighting her for it(!); Mala Key, a hot “little Hawaiian” number who is a “confirmed lesbian” in open love with Su-Lin; and finally Zero (no other name given), a former WWII resistance fighter who serves as Su-Lin’s chaffeur, keeping a limo parked outside her Manhattan building day and night to be at her beck and call. There’s also Mack Gordon in Cleveland, who handles her finances; Su-Lin is astronomically wealthy, with uber amounts of money all over the world.

But unlike the Baroness, Su-Lin treats her comrades like what they are: hired help. There is none of the camaraderie of the Baroness’s team; Su-Lin bosses them about and treats them altogether like peons. Indeed, Su-Lin Kelly is one of the big problems with The Girl Factory. She is arrogant to the point of unlikability. To be sure, the Baroness too suffers from this in her own books, but at least she lets her hair down once in a while and jokes around with her team. Not so Su-Lin, who is pretty bitchy; she herself even wonders if she is “missing something” in her makeup, something which makes her so cold and aloof. Ultimately she’ll find out there is, but at any rate she makes for a poor protagonist for 190-some pages of small, dense print.

But for some reason Murphy doesn’t continue to get further out from here – maybe he figured there was no further to go? But it’s as tedious as can get. Su-Lin orders her vassals about and chases clues, and action is leisurely-paced at best. Murphy stuffs the novel with lots of one-off characters Su-Lin encounters in her investigation into Quantum Growth, among them a Chinese dude named David Niver who, ridiculously enough, has renamed himself thusly from his original Chinese name due to his obsession with David Niven. Su-Lin scores her second kill by easily taking out the Mafia boss who put out the contract on her; she kills him with a tap of her finger while he’s sitting behind his desk, then waltzes out of his study – only to be hauled into a car by two of the guy’s underlings and taken off to be killed.

Another element Su-Lin shares with the Baroness is that she’s often saved by her team; here Su-Lin’s rape and murder are prevented by the appearance of a bomb-tossing Zero. From there it’s back to the clue-chasing, with occasional detours into barely-detailed sex. A Polish secret agent of aging beauty named Zella Kovacks appears and stays for most of the duration; she was working with Casey Greer on the Quantum Growth deal. Turns out they stole the formula to cloning from the Illuminati-like organization the Matsu Underground, which is based out of the Orient. They were about to sell it to some wealthy Arabs when Casey was killed. After much, much research, Su-Lin will learn that a traitor within the MU absconded with the formula, and it is he who is chasing her and trying to have her killed, not the real Matsu Underground.

Eventually the action moves to Vegas, where Su-Lin decides for the helluva it to have some hot lesbian sex with Zella, so as to cement their temporary partnership (Su-Lin’s already thrown ever-lusting Mala Key a pity boff, so this is the second girl-on-girl scene in the book). This one starts via an old-fashioned catfight, with Su-Lin grabbing Zella’s “generously endowed pubic hair” when Zella, enraged at her casino losses, tries to fight Su-Lin. Now they’re a couple of sorts, and disguised as hippies they make their way to Hong Kong, tracing MU clues.

But these are some lame spy-babes; they’re promptly abducted in Hawaii. Now we come to the mandatory rape sequence; Su-Lin offers Zella up to the kidnapper-rapist, biding her time, hoping the dude will be too fatigued from raping Zella to screw Su-Lin, and thus will go down on her(!?). The way these things go, the rapist does just that – and straight-up dies after taking a few laps of Su-Lin’s nether region. Yep, folks, Su-Lin rubbed some handy poison on her crotch while they were being driven here in the hopes that she could get one of her abductors to dine at the Y…

Now, late in the game, we get to the ancient aliens stuff – elderly Brit Miss Smud, who has lived in Hong Kong for decades, regales Su-Lin and Zella with details of the Matsu Underground, how it was formed centuries ago when Earth was visited by aliens, who gave their knowledge to the most intelligent culture they could find on the planet, the Chinese. The MU was formed as a special group to hold this knowledge. When Miss Smud is killed by a sniper, the two spy-babes press on with their search, and eventually Su-Lin meets with Mr. Chan, a Hong Kong banker/MU member who informs her that it is a rogue member of his organization, one Carlo Ghazi, who is behind all the killing, and who has stolen the secrets of cloning to sell to private bidders.

Su-Lin heads on to Tibet, specifically the secluded cloister of Shan Tal, the Lost Horizon-esque monastery in which Su-Lin was raised (and also taught the martial and sensual arts). Murphy has peppered the text with hints of this past, Su-Lin’s adventuring Englishman of a father, Chinese Kelly, having sired her with some local Eurasian babe and Su-Lin being raised in the monastery by Mata Wong, who ran the place. When Su-Lin, acting now with a commando group led by freelance spy-dude Morley (whom Su-Lin has also engaged in vaguely-rendered sex), finally returns to Shan Tal at novel’s climax, she finds the place deserted, the people she grew up with long gone. Carlo Ghazi has taken over, and the place has been turned into a cloning facility – apparently the “girl factory” of the title, though I’m stretching there, as the title has nothing to do with anything in the book. Actually Carlo is cloning the US President and the Soviet Premiere here as part of some hazily-sketched plot.

Action, even in the climax, is scant. We have a plane crash in China, where Su-Lin and Morley are abducted by guerrillas; when they deduce that the only person who could’ve double-crossed them was Zella, Morley almost perfunctorily dispatches her. In truth she was working with Carlo, it turns out. After a lazily-rendered “action scene” at Shan Tal, Su-Lin heads for the cemetary in the nearby village where all the former monastery peeps went, and cries over a certain grave…which brings us to the surprise-reveal of a finale, where we learn, folks, and SPOILERS here, that Su-Lin herself is a clone…!

Mata Wong, now an old woman living in this village, informs Su-Lin of the truth: she, Mata Wong, was Su-Lin’s true mother, but hid it due to her alleigance to the monastery; when those bandits killed China Kelly in battle, young Su-Lin was also killed…and Mata Wong used the ancient alien cloning technology to bring her daughter back. Su-Lin was lied to about her true age, history, and whatnot, but now she knows the truth. How’s she handle it? She tells Mata Wong so long and heads on to Hawaii to reflect for a few weeks…and to have more off-page sex with Morley, who himself takes the news that his bedmate is a clone altogether casually. The end!

Summing up, this one’s sadly tepid, particularly when you consider the fantastical elements. I don’t intend to track down the other two volumes, but will pick them up if I ever come across them at a cheap price.
Posted by Joe Kenney at 6:30 AM

I've managed to get the 2nd title of the series, "King's Mate". But this one is even less exciting than the first. I'm puzzled that there are 3 titles, as I've only uncovered two. Another title "The Man-Made Woman" also by R F Murphy is actually the same as the first, "Girl Factory". Is this the 3rd title you are referring to or something else?

Hey, P, thanks for the comment. Glad to hear you found that second volume. As I recall, Brad Mengel had been under the impression "Man-Made Woman" was a retitled reprint of volume 1 when he was doing his "Serial Vigilantes" book, but later found out it was actually a new story. Or have you gotten a copy of "Man Made Woman" and can confirm it IS just a reprint of "Girl Factory?"