The Specialist #7: The Vendetta 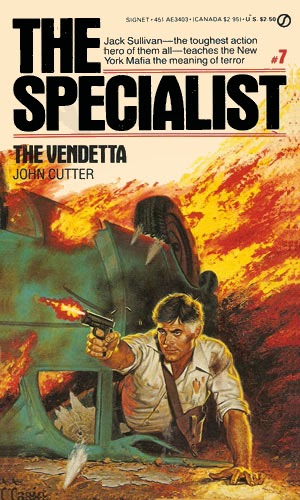 The Specialist #7: The Vendetta, by John Cutter
February, 1985  Signet Books

I’m betting John Shirley's original title for this volume of The Specialist was “Make ‘Em Pay,” as the phrase is repeated a few times by bloodthirsty hero Jack Sullivan, who’s in full Johnny Rock mode this time out – in fact going even further, to the point where he’s practically a psychopath. I’ve said before that Shirley can churn out a great men’s adventure novel when his heart’s in it, and The Vendetta is a case in point.

In an earlier volume we learned that Sullivan had a rocket launcher installed in his war wagon van; this time out we actually get to see him use it, when in an early action scene Sullivan fires it against a group of Mafia thugs. Yes, the Specialist once again goes up against La Cosa Nostra, in particular the family of Don Toscani of New York. Sullivan’s been hired by Janet Springer, a gorgeous (of course she is – and busty, too!!) lady whose brother and father were mudered by Toscani.

Janet wants Sullivan to “make ‘em pay,” and this is what Sullivan proceeds to do…over the course of the entire novel. It’s funny, because in novels like Wetbones Shirley proves his mastery of multiple plot strands, but in The Vendetta and the other Specialist novels he sticks to a single plot until the bitter end. But in this regard The Vendetta again comes off like a throwback to the lurid ‘70s incarnations of the genre, like the The Sharpshooter and The Marksman, with our merciless hero enacting merciless vengeance with single-minded resolve.

And speaking of merciless, Sullivan here could give lessons to those earlier “heroes.” He’s even more unhinged than normal, thanks to a bump on the noggin he suffers early in the book. As The Vendetta progresses and Sullivan fully engages in his war against Toscani, the Specialist becomes increasingly violent and insane. Like the Hulk, if he’s pushed too far he goes nuts, beating people until they’re hamburger. He’s also capable of inhuman feats, like picking up a friggin’ Harley Davidson chopper and crushing someone with it.

Shirley doesn’t waste as much time on plot or development – Janet hires Sullivan, and after he’s hurt in that opening melee she helps him recuperate for a few weeks in a shack Sullivan keeps in the woodlands north of New York. Of course graphic sex ensues, but once that’s done with (as well as a pair of yokels who have the fatal misfortune of sneaking onto the property with the intent of raping Janet), Sullivan calls up his old pal Merlin to come watch Janet while Sullivan goes into town to kill some mobsters. And that’s pretty much it.

But the demented glee with which Shirley writes the ensuing carnage is almost contagious. This is the most darkly comic Specialist yet, and they’ve all been pretty darkly comic. Shirley also proves his gift with doling out action movie one-liners, like when some hapless thugs try to mug Sullivan on the streets of NYC, and after telling them he left his wallet at home he asks, “You accept bullets instead?” We even get the in-joke stuff, like how Sullivan’s “undercover” name is Rich Stark.

Also the violence and nihilism is through the roof. Sullivan in his increasing madness goes to staggering displays of death and destruction in his intent to spread fear in Toscani and his men. This stuff too goes into the “inhuman feats” realm, like when Sullivan constructs a friggin gallows for one of his victims and times it so the noose drops just as Toscani drives by. The novel is filled with these vignettes of Sullivan going to some insane length to murder this or that Toscani flunky.

Eventually Sullivan too realizes something is wrong with him. After visiting a doctor he discovers it’s a blood clot that’s making him act so crazy, the result of that head trauma he received in the opening pages. The doc gives Sullivan some experimental laser surgery to break it up, but it still lingers a while, with Sullivan only slightly less insane when pushed too far. Meanwhile two of his old ‘Nam pals, both of them FBI agents and reappearing from earlier novels, are hunting for Sullivan, due to his latest acts of mini-genocide: Holstead and Sanson. Shirley works in a little subplot here with Sanson covertly trying to recruit Sullivan for a new Justice Department task force.

Maybe the only problem with The Vendetta is that the villain is so forgettable. We never see Toscani do anything bad; from the opening pages he’s gnashing his teeth over the fact that the Specialist is out to get him, and he spends the entire novel quaking in terror. Meanwhile we read as Sullivan puts various Toscani henchmen through the veritable wringer, and it gets to be that you start to feel sorry for these guys. But I’m assuming that’s the point, as Jack Sullivan himself is the closest thing to a “villain” in the novel.

But anyway despite once again being too long for its own good (surely it was a Signet mandate that these books were so long), to the point where it comes off as perhaps one “Sullivan kills a dude in horrific fashion” scene too many, The Vendetta is still probably my favorite volume yet of this series, mostly because it comes off like an amped-up ‘80s variation of The Sharpshooter or The Marksman, with a “hero” more insane than the “villains.”
Posted by Joe Kenney at 6:30 AM

YES! This is also, hands-down, my favorite SPECIALIST novel, all for the reasons you describe. The idea that a head trauma can cause Sullivan to "Hulk Out" is genius in the goofiest way imaginable, especially when he starts slinging around 500-pound motorcycles.

Glad you read this one finally. I need to go back and read some of these again, because they are such whacky fun.

Jack, thanks for the comment. This is definitely my favorite Specialst yet as well. You've mentioned the volume with "psycho Sullivan" for a while, so I was happy to finally get to it! And as usualy, Shirley didn't disappoint.

That makeshift gallows that catches just the right character reminds me of a similar scene in the ' 89 version of THE PUNISHER (a scene that it might have inspired for all I know).

I don't think you review very many movies, but have you ever thought of reviewing that one?

I second the idea of Joe reviewing ’80s action movies!