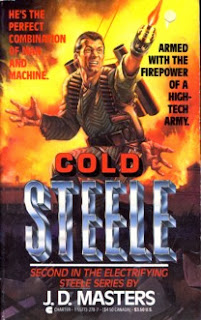 Two weeks after the first volume and Lt. Donovan Steele is still in shutdown mode, being repaired and partially rebuilt after suffering so much destruction in the previous book. And while he’s given new cybnetic accessories with which to kill people, Simon Hawke (aka “J.D. Masters”) is once again more focused on plumbing the depths of the human soul and turning out a piece of “intelligent sci-fi” rather than the men’s adventure the great cover painting promises.

Hawke opens the tale from the perspective of Dr. Dev Cooper, a Texas-born psychiatrist with a specialization in cybernetics. Dev’s here to replace Dr. Susan Caromdy, who as we’ll all recall was blown away in the finale of Steele #1; Dev is understandably shocked to discover that Dr. Carmody was in a romantic relationship with her patient Steele. Dev Cooper takes up a goodly portion of the narrative, as he serves as the medium through which Hawke obsesses over his favorite topic for this series – Can a man with a cybernetic brain truly be human?? Yes my friends, the exact same conundrum obsessed over so endlessly in the previous volume is obsessed over again in this one!

In fact this scientific/metaphysical/”what makes us human??” pondering takes up the brunt of the novel, just as it did in the previous book. Meanwhile Steele is hooked up with all kinds of new tech, mostly I’m guessing in accord with the publisher’s request – I’m betting that cover painting was commissioned before Hawke wrote his manuscript, or at least at the same time. Because the weaponry Steele’s given seems to come from the mind of a publisher who wanted to capitalize on the Terminator or whatever, but Hawke really doesn’t do much with it.

Anyway, Steele now has detachable hands which he can hook on his belt and replace, Evil Dead style, with various weapons. But also built into each arm he also now has internal weapons – a “10 m.m. gun barrel” in his right forearm and “ten 45 m.m. nysteel rocket darts” in his left. If he bends his hand back, the barrels will poke out of little holes in his palms. He’s also got a laser-locking system in his eyeballs, so they glow red (again, per the cover) when he’s targeting something. Finally, various parts of his body have been reinforced, so he can take more damage than previously.

But wait…Steele’s still human!! We must not forget this. But really there’s no danger of forgetting, as Hawke ponders the question throughout the entire friggin’ novel. This obession does lead to an interesting area; Dev, realizing that Steele is reluctant to fully open up to him, gets hold of Steele’s full consciousness, which was downloaded to software in the previous volume. Now all Dev has to do is boot it up on his PC and he can ask Steele whatever he wants, and “Steele” will answer him. This by the way proves to be Dev’s full interraction with the novel; once he gets this software Dev just sits in his room, becoming progressively frazzled over the unethical nature of it all as he continues to plumb the depth’s of Steele’s separate psyche.

But hold on…is Steele still human or not?? Seriously though, at least Steele himself has mostly come to grips with his new life. He also seems to pretty quickly move on from the death of Susan Carmody; revenge is his new focus, as he’s determined to bring down Victor Borodini, the New York-based kingpin who not only caused the death of Susan but also ordered the hit which destroyed Steele’s human body in the previous novel. Steele wasn’t the target of that failed hit, though; it was Ice, the muscle-bound former boss of black inner-city street gang the Skulls.

As introduced in the last page of the first volume, Ice is now going to be Steele’s partner; this per Higgins, the shady operative who commands Steele. This entails the usual banter between the two, as Steele doesn’t want to work with Ice and etc. Ice of course gets to prove himself in the first of the novel’s few action scenes, though again Hawke dispenses with the action quickly and they’re almost written in an outline format, barely given any depth or description – like, “Steele fired at the two men and they fell to the ground.”

The team extends to three people when Raven is brought into the fold – a 22 year-old hooker who looks much younger, Raven exudes a “trashy sexuality” and is in the process of being raped by several members of Ice’s old gang when Ice and Steele drop in on the scene. Saving the girl (who later brushes off the gang rape, saying it wasn’t really anything new for her!), the trio repair back to the opulent skyscraper/fortress which serves as Steele’s home, Ice now living there as well.

Steele has Raven stay with him while she recuperates, eventually leading to an unusual arrangement where the hooker (who of course has a heart of gold) ends up living with him. Raven’s sob story has it that she once dated Tommy Borodini, son of Victor, and after Raven got sick of his shit, slicing his face after his latest attempt at beating her around, Tommy had Raven tossed on the streets and forced into prostition.

It’s this past relationship with Tommy Borodini that allows Raven to stick around, as she implores Steele to let her help, as she wants vengeance on the bastard. While the narrative heads in this direction at first, Tommy B. himself soon puts things in a different gear by abducting a congressman and issuing his demands to the government (which is now based in New York). The abduction is really a gambit to kill Steele, as Tommy B. puts Steele on a wild goose chase, running around the city and getting to certain phone booths at the right time to answer his calls, or else the congressman dies.

But thanks to a handy gizmo which allows a CIA agent named Sharp to mimic Steele’s voice, our protagonist is able to suit up in riot gear and go solo into Borodini’s enclave. Another outline-style action sequence ensues, with Ice and Raven helicoptering in to join the festivities. Hawke gets a bit lurid here, with the revelation that Victor Borodini is in an incestual relationship with his son, Paulie! Meanwhile Tommy Borodini still holds the congressman captive, and even after his father demands that he give up, Tommy refuses, ending up being bumped off by another of the Borodini boys.

For the most part, though, Cold Steele is made up of long dialog exchanges, or static scenes in which the characters plumb the depths of their own souls. Plot takes second place to character, and the action scenes are few and far between. Given this, I’m still willing to bet that Simon Hawke was the author behind the Psycho Squad series, which shared the same weaknesses. Again, I don’t mind any of the above stuff, but we’re talking about a volume of an action series with a cover showing a gun barrel-handed cyborg with glowing eyes. Given this, I don’t want to read endless debates on the nature of humanity.

I often wonder about how publishers made these writer choices. I mean, it’s obvious from the cover that Charter intended this series to be a violent cash-in on Robocop and the like. And yet, they hired a dude who could care less about writing action scenes…and when he did write them, he dashed them off quickly and moved back into the soul-searching stuff. I can’t help but feel that Steele would’ve been a lot more enjoyable if Charter had gotten a writer more suited to the men’s adventure genre.
Posted by Joe Kenney at 6:30 AM

Hawke went on to do some Dungeons & Dragons novels and even then, action usually fell by the wayside for character arcs. That being said, he seemed to write great fights, he just kept them few and far between.

Tex
(who had the first couple at the time, but never read them)

Thanks guys, for the comments. And Tex thanks for the TimeWars mention, never heard of that one. I've always been into time travel stories, so maybe I'll look into the series.