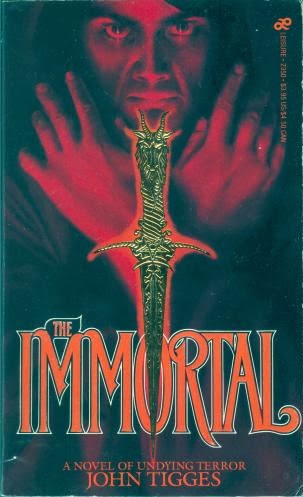 The Immortal, by John Tigges
No month stated, 1986  Leisure Books

John Tigges published several horror paperbacks through Leisure Books in the ‘80s; I’ve picked up a few over the years, but this is the first I’ve read. Like most other Leisure horror novels The Immortal runs to a fat 400 pages, but it’s got super-big print and Tigges’s writing is so pulpy and melodramatic that you’ll finish the book in record time.

Thumbing through my other Tigges books, it looks like they’re all the same – big books, big print, and fairly lurid, with a strong focus on horror exploitation, pulpy thrills, and explicit sex. What more could you ask for? The Immortal concerns itself with a Satanic group -- not a cult, as the members stress -- whose leader turns out to be the titular “immortal,” granting himself this extended life through mysterious means.

It takes a while to get to the good stuff, though. Our hero is Riley Larson (misspelled “Laron” on the back cover), a freelance writer/high school janitor in his early 30s who lives outside of Chicago. His live-in girlfriend is stacked redhead Melanie, 24, a free spirit with the mouth of a truck driver; the couple are in an open relationship. Then there’s Vicki, Riley’s blonde and elfin ex-wife. The first hundred or so pages of The Immortal are really given over to detailing the melodrama of Riley’s life as Tigges takes his time getting to the plot.

Riley writes articles for the local paper, and when in the opening pages he thinks he witnesses a late-night occult ritual out in the woods (complete with a topless woman with “large breasts” and what appears to be the sacrificial knifing of a man on an altar), Riley figures he’s got instant article material. The next day he finds a sacrificial knife near the grounds (with a goat’s head on it, as shown on the cover), as well as the burnt remains of a Bible. Riley keeps these things to himself, as well as the fact that he thinks he witnessed a murder, and just writes about the possibilities of cult activity in the area.

The article opens up doors for Riley, thanks to the apearance of Leeanah Thorndyke, a super-hot brunette who claims to be from the “group” Riley saw performing that rite in the woods; indeed, it was she with the large breasts Riley oggled from afar. (The way Tigges describes Leeanah, with her raven hair, pale skin, and enormous breastesses, it’s hard not to think of Elvira!) Leeanah invites Riley and Melanie to attend the group’s meeting later that night, and after being chaffeured to his mansion in a Rolls Royce, the couple are introduced to Sebastian Synn, the elderly leader of the group.

Truth be told the exploitative Satanism stuff gets off to a slow start; their first meeting with Synn entails Riley and Melanie disrobing in an egg-shaped temple in Synn’s mansion while the old man recants some Latin and ritualistically fondles each of them in turn. But by the next day the couple sees an upswing in their life; Riley’s offered a job as a full-time writer on the paper, and Melanie is commissioned to do some high-paying portraits. It’s all pretty humdrum. Only the next ceremony points to the direction things will go, as this time Riley gets to have sex with gorgeous Leannah on the altar while Synn chants a vengeance ritual against a gay sorceror who opposes him. Tigges spends about a paragraph on the ritual sex, and doesn’t make much of it.

But in a precursor to Maury Terry’s The Ultimative Evil, Riley’s called by the cops next day as an “expert” on what appears to be a cult murder. Two headless bodies have been found, their severed heads crushed in the same manner as the wax dolls Synn mutilated during the previous night’s ritual. But as usual with a character in a horror novel, Riley refuses to believe that these two men are the “gay sorcerors” Synn was out to get, let alone that they’ve been supernaturally decapitated.

At least Riley and Melanie begin to suspect Synn enough that they refuse to come over again that night. Some of the lamest “threats” I’ve ever read ensue, as Leannah keeps calling to see if they’re going to come over, and Riley and Melanie tell her they’ve got the flu, and an increasingly-frustrated Leannah tells them she hopes nothing “bad” happens to them or whatever. Eventually this “bad” stuff emerges when Riley gets a call from his editor, who tells him that “the banker” said the paper can’t afford a new fulltime employee, and Melanie too finds out that her portraits have been cancelled. The horror!!

Things get a bit worse when the following morning Riley discovers his home office destroyed…and his poor old dog dead and crucified to the wall! Neither he nor Melanie heard anything all night, and as they’re puzzling over this, Riley receives another call from the cops…turns out his ex-wife, Vicki, has friggin’ internally combusted!

From one of the few scenes from Synn and Riley’s perspective, we see Synn do yet another ritual, this one entailing Melanie having sex on the altar with all six of Synn’s male acolytes. Synn’s aim is to kill Riley’s wife, who Synn believes was interfering with Riley’s desire to join the group, Synn under the impression that Melanie and Riley are married. But due to Synn’s vague wording, Vicki, Riley’s true wife, instead is the one who blows up real good. (At least Satanic prayer is effective!!)

After Synn buys off Melanie with a palm-sized diamond, Melanie agrees to get Riley to go back to the mansion…for whatever it is Synn wants Riley for. It should be obvious they’re walking into a trap, but our protagonists blithely eat dinner with Synn and Leannah, and promptly head off to their appointed bedrooms, where they’re nonplussed to discover attire suited to them in the wardrobe. Turns out Synn plans for them to stay for the long haul. Oh, and Riley enjoys a long and explicit sex scene with what appears to be a succubus, a “Stygian form” which appears in his room that night and proceeds to screw his brains out – Tigges serving up all the details on how this mystery woman has such firm command of her “internal” muscles, if you catch my drift.

And yet for all that, the book’s kind of boring. I should mention by this point we’re 300 pages in; all this stuff could’ve happened 200 pages ago. But Tigges is in no hurry whatsoever to tell his tale, and is not above wasting your time with redundant and needless scenes. Characters endlessly ponder things that would be easily solved by glue-sniffing kids. And the sleaze quotient, while there, isn’t all that outrageous, limited to a few moments in the Satanic temple and Riley’s nightly visits from his “Stygian” guest, whose true identity turns out to be one of the novel’s few surprises.

Another positive thing to be said about The Immortal is that it doesn’t end on the happy note I expected. Tigges serves up a downer of a finale which, despite being memorable, does seem at odds with the rest of the book. And also as is to be expected from a piece of horror pulp, too many pages are wasted on inconsequential things and too few important things are explained or resolved. Also, too little is exploited; the novel could’ve been a lot better if Tigges had focused more on the Satanic sleaze and less on the mundanity of Riley and Melanie’s relationship.

In other words, The Immortal doesn’t have a thing on William W. Johnstone’s The Nursery. I’ve got more Tigges books, as mentioned, and I’ll surely read them, but here’s hoping they’re more along the lines of the lurid trash I demand in my horror fiction.
Posted by Joe Kenney at 6:30 AM

The idea of them killing his ex-wife instead of his wife sounds like it could've been inspired by STRANGERS ON A TRAIN.
In fact, if they had KNOWN they were doing that, they could have threatened to frame him for it, and it would've resembled that story even more.

The decapitations remind me of the iconic New York Post headline "Headless Body in Topless Bar."