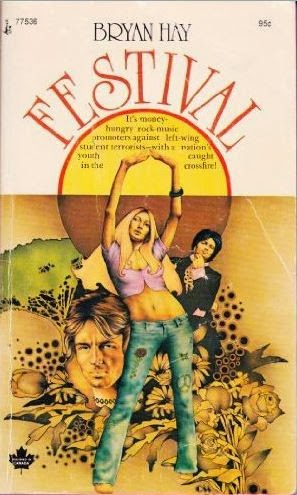 This slim paperback original details the planning and development of a Woodstock-style rock festival. One thing the front and back cover don’t make clear is that Festival actually takes place in Canada; Toronto and a desolate area of western Ontario, to be exact. Another thing the front or back covers don’t make clear is how much of a bore the novel is, despite the interesting concept and awesome cover art.

Bryan Hay, an obscure author if ever there was one, apparently was a Canadian himself, as he seems very comfortable (gradually) doling out his story about small town Millwall, Ontario and how it is impacted by the announcement, late in 1969, that local farmland has been bought by a two-man business calling itself Oracle for the express purpose of hosting the biggest rock concert since Woodstock. Hay doesn’t deliver the story of the festival, though; instead, he details all of the trials and tribulations that go into the actual planning of it.

In a way the novel is like a shorter and less entertaining version of Norman Spinrad’s later Passing Through The Flame. Make that much shorter, with Festival coming in at a mere 156 pages of smallish print in comparison to the 568-page monstrosity Spinrad delivered. But, again, Spinrad’s tale was just so much better, and so better told. And whereas Spinrad focused on the unusual and memorable personalities who would headline and attend such a concert, Hay instead spends too many pages on boring small-town saps who fight against the “corruption” of rock and the hippies and etc.

And for that matter, his “freaks,” ostensibly the heroes, are just as bland. For example there’s Peter Embry, for the most part the protagonist of the tale; a veteran “rock” reporter for a Toronto paper, Embry is called in to Millwall when the announcement is made that Oracle plans to host a “festival of love” there. Embry is one of the least memorable protagonists I’ve ever met, but then none of the characters here are memorable, Hay doing little to bring them to life or to explain why they do what they do. This only further serves to sap the energy from this listless tale.

The guys behind Oracle are as expected soulless capitalists, despite being young. Their lawyer is even worse, believe it or not(!), and there follows a slightly-memorable bit where he sets up Art Clare, a Millwall notable who is violently opposed to the festival. Inviting Clare to Toronto, Oracle blitzes the poor bastard on acid, has a hooker (or the lawyer’s secretary; it’s never made clear) screw him, and photographs the shenanigans, blackmailing Clare into reversing his position! This has the ultimate outcome of Clare blowing his head off, a plot development that couldn’t come sooner, as far as I was concerned, because believe it or not Hay spends a lot of narrative time on Art Clare and his boring meetings with other Millwall reps as they rage against the festival and the dirty hippies and etc.

What I’m trying to say is, this book pretty much sucks. So much damn time is wasted on the Millwall locals bitching about the festival, and the planners of the event are either little explored or presented as such halfwits that you can’t stand them, either. As for the girl so wonderfully drawn on the cover, she doesn’t exist in the novel itself – unless that is she’s the artist’s interpretation of Susie Clare, daughter of Art, a 15 year-old who Peter Embry easily picks up while driving around Millwall on his first day there and proceeds to screw in quite explicit detail in the front seat of his truck.

I’ve never understood what the obsession is with “young meat” in pulp fiction, I mean the last time I paid attention to a 15 year-old girl, I myself was that age. And speaking as an adult, I can’t help but think what kind of a nightmare it would be to even become involved in any way with a teenaged girl – and that’s not just including the legal nightmares. Yet for whatever reason, screwing teen or even preteen girls seemed to be all the rage in late ‘60s/early ‘70s hippie trash literature, and thus Festival follows suit, as young Susie Clare is the sole female protagonist in the novel, and features in all of the explicit sex scenes.

Almost as worse is that Susie Clare herself is so boring, not to mention self-involved. Also, like all the other characters in the novel, she is shielded from us in a way, as Hay never really gets into her brain so we can see what she thinks and why she does the things she does. For example, the easy pickup she provides Peter Embry in the opening pages; there’s no buildup or resolution, they just meet and screw. But then, this is set in 1969, so that’s understandable.

What isn’t understandable is how we’re supposed to side with Susie, later in the novel, when after her dad blows himself away Susie runs away from home to Toronto, leaving her now-widowed mother in the lurch, and shows up at Peter’s doorstep, expecting to move in with him. And this wizened reporter, well into his 30s, lets her live with him. All very strange in today’s world. Especially as it continues on, with Peter hooking Susie up with his friends, also in their 30s – Bill and Joyce Henshawe, the latter of which should’ve been the main female protagonist, as with her waist-length hair and gypsy fashions she’s a full-on hippie chick. But Joyce contributes nothing to the tale…other that is than another questionable-but-explicit scene in which she introduces Susie to the delights of lesbian sex.

Things start to get slightly interesting a little over halfway through with the appearance of 3F – Free Festival Forever, a group of radical hippies who begin sending threats to Oracle that the concert should be free. Lead by an American draft-dodger named Norm Phillips, 3F spews out all of that grating stuff about “the people” and against “capitalist pigs” and etc, all of which was already dated by the time the book was published in 1973. But even Phillips is shuffled out of the book quickly, and Hay doesn’t really bring the others to life, other than one named “Pudge” who mails Oracle a letter that they should consider making the festival itself free, but bring in concession stands and whatnot to really rake in the proceeds.

As for the actual festival, Hay doesn’t even get to it until the final pages of the book. Practically all focus is placed on the rigors of booking talent and ensuring all of their demands are met. So then we learn how many high-profile groups have backed out, due to the bad vibes surrounding the event, including Dylan and the Stones. But then the Moment of Truth agrees to play, for ten thousand a set. The Grateful Dead in all but name, the Moment is known for its rampant drug use and backing of radical sentiments, so Oracle knows they’ve found the best headliner they’ll get.

Meanwhile, Susie discovers she’s pregnant. This bizarre melodrama gets more narrative focus, but never with a focus on the fact that she’s still a minor. Even when Susie’s mother visits, after Susie writes her months after running away to let her know she’s, you know, still alive and all, her mom just gnashes her teeth that she “wanted better” for Susie. But strangely enough mom doesn’t make much of a deal over the fact that her just-turned-16 daughter is about to have a child. But whatever; Susie continues to smoke hash with Peter and the Henshawes, all of whom by the way are excited over the prospect that she’s pregnant.

Everything culminates at the Festival, which sees 3F throwing a riot and “the people” storming the gates, during which Susie is kicked in the stomach by a fucking police horse and Embry has to move heaven and earth to get her out of the chaos of the place, as of course little thought was put into emergency situations by the planners. So while Henry Mendez (aka Jerry Garcia) of the Moment of Truth (aka the Grateful Dead) tells the audience that the festival’s a bust, Hay meanwhile cuts over to the hospital, where we learn that Susie lost the baby, but hey, they’re still in love, so she and Peter are going to try to make a life together, anyway. The end.

Another of the novel’s many failings is that Hay captures little of the period’s detail. For this, again, compare Norman Spinrad’s Passing Through The Flame, which was positively brimming with period detail, from the stylish clothing on the characters to the psychedelic posters on the walls. Hay rarely brings his scenes to life with any sort of topical details, and in fact he writes with such disdain about everyone that ultimately you have no idea whose side he’s actually on.

So then, an instance where an obscure book is justifiably obscure; Festival is not worth the effort it might take to track down. In fact I’m guessing the book had a scarce print run, as at the time of this writing no copies are even listed on abebooks.com, and those few copies to be found elsewhere on the web go for exorbitant prices. Save your money.
Posted by Joe Kenney at 6:30 AM

Thanks for the advice, Joe. I've been keeping an eye out for this one, but only because I was sure it would be awful. Pocket's short-lived Canadian arm published many of the very worst PBOs the country has ever seen. Among my favourites: The Happy Hairdresser, The Queers of New York, Satan's Bell, and The Last Canadian.

Truly wretched, every one.

Brian, thanks for the comment. I didn't realize Pocket had a Canadian imprint, but now it all makes sense. It would also explain why there appears to be so few copies of "Festival" online. And thanks for the links to those other books!

My pleasure, Joe. I'm certain you'd like The Last Canadian (a/k/a The Last American and Death Wind). Post-apocalyptic trash at its most glorious.