Hitman #3: The Girls Who Came To Murder 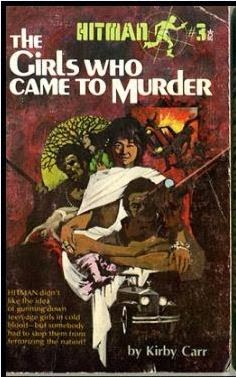 Hitman #3: The Girls Who Came To Murder, by Kirby Carr
No month stated, 1974  Canyon Books

Things get a bit more lurid with the third installment of the Hitman series; a bit more lurid, but also a lot more messy. According to the Catalog of Coypright Entries this volume was also written by Kin Platt (aka “Kirby Carr”), but the prose style isn’t much like that in the previous two volumes. So if it really was Platt, he was either A.) Rushing to meet a deadline, B.) Drunk, or C.) Drunk and rushing to meet a deadline.

In fact the plot is practically a rerun of that in the previous volume: a group of hippies are going around California, randomly murdering people in the most sadistic of ways. In other words, The Girls Who Came To Murder plays on the Manson fears of the time (and as for that exploitative title, the back cover has it that young women in “miniskirts” are behind all of the killings, but really it’s both male and female hippies). But whereas the previous volume at least stuck to its main plot, this one jumps around to all sorts of arbitrary stuff.

Action scenes are also drastically reduced, with what few of them there are doled out quickly, Mike “Hitman” Ross blowing away knife-wiedling hippies with his Mauser and Luger. But as mentioned the lurid element is much increased here; for example there are many unsettling instances in those “action” scenes in which Ross will blow away a female hippie, and Platt will describe how her face blows off or her eyes pop out. The lurid factor is even more increased in the sex scenes, which are given greater focus this time out.

But as mentioned this novel is just incredibly messy, and Platt obviously made it up as he went along. For one thing, the hippie threat when the novel begins is widespread, with murders happening all over the country, and Ross is concerned that there are too many of the hippie killers to find. But by novel’s end, the hippie killers are reduced to a mere ten or twenty people, and they’re just hiding out in the canyons outside of Los Angeles! Not only that, but Platt isn’t above wasting your time with redundant and repetitive scenes, the most egregious example being a long subplot about an Indian “guru” which turns out to have no bearing whatsoever on the novel.

Ross himself doesn’t do much this time around, other than stalk hippies, debate with himself if they’re “good ones” or “bad ones,” and if they’re the latter he waits to see if they’ll try to murder someone…and when they do, he kills them before they can! No mention of his ninja training or varied arsenal this time, and even his pulp superhero-esque costume (ie the “cowl with eye-slits) is rarely mentioned. One thing that remains though is Ross’s stupidity in certain areas, namely how he just straight up kills every hippie murderer he encounters…and then wonders later if he’ll ever be able to figure out where they all are hiding or who their leader is! I mean, never once does the guy spare one of them for later interrogation!

More narrative space is given over to hippie loser Harvey Keller, who turns out to be the “leader” of the hippie murderers. You’d figure Keller would be a Charles Manson-type, molding his acolytes into wild-eyed killers via drugs and sex, but Platt’s imagination is a lot more lazy…no, we are informed that Keller, due to his boyish good looks, has always been able to get women to go for him, and over time women started coming to him for advice. Soon he had a flock of followers, including men, who’d come to hear his mystical blatherings, which Keller made up on the spot. Then one day he made a random statement about killing “the man,” and two of his girls went out and did that very thing!

Now we’re told that some of the women in his flock will carve a “Z” on their forehead (for how they’ve “zapped” the enemy – seriously!), and also how the females are more violent than the males. But even this shit is soon forgotten, as Platt spends more time focusing on 14 year-old Raj Bab, who is taken from his home in Calcutta by shyster Sri Jildi and turned into a Maharishi-esque guru, who soon becomes globally famous for spouting off mystical blatherings, most of which he comes up with on the spot.

Yes my friends, Kin Platt writes the same exact story twice in this novel! Keller’s story and Raj Bab’s story are basically the same. And as if this in’t enough indication of how disinterested Platt is in writing the book, he repeats himself throughout the text…like for example, a middling sequence late in the novel where Raj Bab gives a conference in LA. We read on as Keller, Ross, and one of Ross’s girls each attend the conference separately, and Platt writes practically the same descriptions each time.

Indeed the Raj Bab stuff takes central stance in the narrative, with Platt serving up long sequences in which he meets with the press and delivers pages of mystical blather for their pleasure. We’re told how the wealthy soon flock to Raj Bab, and how Sri Jildi gets very rich as a result. Meanwhile the hippie killers are for the most part forgotten, save for a scene or two where Ross will stalk a few of them, witness them about to kill someone, and then promptly blow them away…and then go home and wonder how he can find out where they’re coming from or who is commanding them!

Platt also page-fills with lots of arbitrary flashbacks to Ross’s time in ‘Nam, and also he opens up the character a bit with Ross getting into these soul-baring dialogues with himself, like how can it be right for him to murder, but wrong for the hippies to do the same thing, and etc. To Platt’s credit this does actually lead to an unexpected finale, where Ross just happens to see Fran murder that aforementioned college guy on the beach (apparently the first person she’s murdered, as Platt states that Fran is a “new” girl in Keller’s “Family” and not one of the murderers) and follows after her.

Rather than a gun-blazing climax, it all plays out on more of a melodramatic level, with Fran literally stabbing Keller in the back after Keller tells her he’s leaving the Family and going to work with Raj Bab. Then Ross shows up, gets all the answers from Fran in a long dialog exchange (at least he’s finally learned to interrogate his enemies, I guess)…and then puts her on a plane for London! Apparently Ross feels bad for the girl, realizing she’s had some bad knocks in life and got involved with the wrong people. I guess the murdered college kid was just collateral damage.

And the kicker here is that ultimately the Raj Bab/Sri Jildi stuff has absolutely nothing to do with the rest of the novel! This is probably the biggest red herring of a “subplot” I’ve ever read in a book. But seriously, all those pages devoted to Raj Bab have zero payoff or resolution…Platt makes a small attempt to make it that Keller’s master plan in the final pages is to record an album for Raj Bab(!), but even this is so lazily developed that it makes the waste of the reader’s time all the more obvious.

It sounds like "Raj Bab" is based on a real person (though I can't think of his name), a "teenage guru" figure who became very big in this country in the early ' 70s.