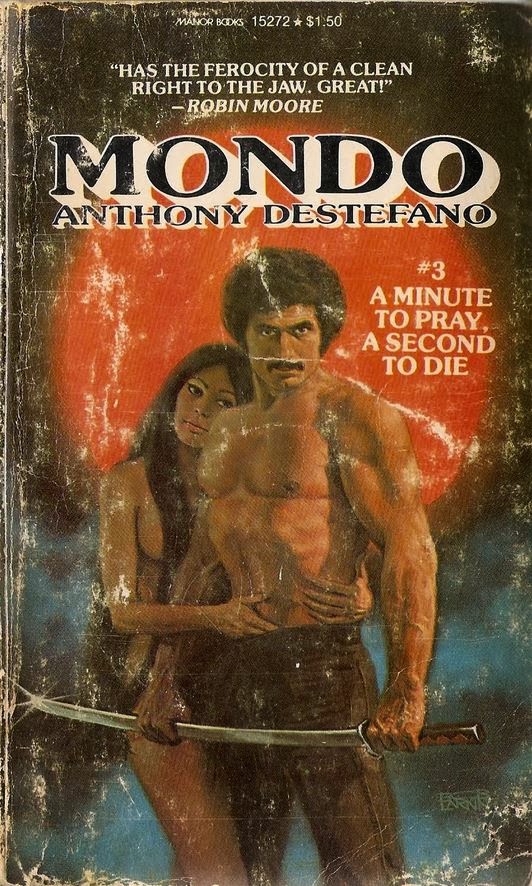 Mondo #3: A Minute To Pray, A Second To Die, by Anthony DeStefano
No month stated, 1977 Manor Books

It took me four years, but I’ve finally finished the Mondo trilogy. And I’m happy to report that this concluding installment is a big improvement over the previous volume, and is almost as good as Mondo #1. The main reason for this is that Mondo himself is once again a cold-blooded bastard, running roughshod over any who dare get in his way, man or woman.

“Some dumb bastard had the crazy idea he could kill Mondo’s friend,” goes the hyperbolic back cover, which basically sums up the entire novel. Whereas Cocaine Kill was, for me, kind of a bore, overly padded and dull, A Minute To Pray, A Second To Die removes all of the padding and just goes straight for the jugular. It’s all action, all the time, as Mondo tries to kill all of the assassins who have been hired to kill his teacher, Kisaka.

But first, Mondo’s busy screwing “a dark-haired Eurasian beauty from the bowels of hell” named Michi. Not sure about the “Eurasian” part, as Michi clearly seems to be Japanese, but she’s definitely a gorgeous gal with an ice-cold heart, and she happens to be the leader of the assassins. Not that Mondo knows this; Michi insinuates herself into Mondo’s life while he’s vacationing down in Florida (no mention made of how long ago the previous volume was, by the way). Her goal is to distract Mondo while her team kills Kisaka, up in his retreat in Vermont, and to do this she follows her favorite method, using her body.

In fact sex has a stronger focus in this volume than the previous two. DeStefano spares no details as he recounts the many times Mondo and Michi get friendly, which happens throughout the novel. He also works in a “doomed lovers” angle, as Mondo and Michi are perfect for each other, but obviously are on different sides. Michi we gradually learn was hired by Yamoto, whose father was killed by Kisaka years before in a separate revenge scheme, Kisaka’s father having committed seppuku due to the actions of Yamoto’s father. But anyway all that’s backstory, and DeStefano only barely doles it out.

Instead he’s much more concerned with the action, of which there’s aplenty. Michi’s team is one colorful group, from a guy who only uses arrows on his hits, to a former Mafia hitman, to a rogue CIA agent, and etc. Unfortunately, DeStefano does little to distinguish them from one another, and other than a quick introduction with name and speciality, he doesn’t really bring any of them to life. At any rate they have a great track record, and we’re informed that after years of working together they’ve never blown a mission and they haven’t lost a single member of the team.

But now that they’re tangling with Mondo, of course, it’s a different story. Mondo is once again pure badass, with none of the hesitation or uncertainty of the previous book. DeStefano also doesn’t waste time with informing us how Mondo bends the rules or whatever, like he did in Mondo’s overlong fight to the death with a kung-fu asassin in the previous installment; instead, this time out, he just shows Mondo brutally taking out anyone who opposes him. The only stumbling block here is Michi, as Mondo knows she’s part of the assassination scheme and thus shouldn’t be trusted, but can’t keep himself from growing close to her.

DeStefano follows this theme through in a variety of ways, with Mondo and Michi constantly struggling against one another despite their growing love. This is even mentioned in their many sex scenes, with Michi trying to assume the position of “authority” and Mondo rolling her over so the man can be on top. But truth be told, Mondo kind of comes off like an idiot, because it’s apparent Michi knows more than she lets on – and indeed Mondo is aware of this, even of the fact that she’s more than likely a member of the assassin squad sent after Kisaka. But he keeps going back to her, or hopping in bed with her when she shows up unnanounced.

Meanwhile the plot unfolds in threadbare fashion. It’s like this: Yamoto wants Kisaka to die. Yamoto hires Michi (and has sex with her when possible). Michi puts together her team and sends them after Kisaka while she “distracts” Mondo. But meanwhile Mondo keeps showing up and killing the assassins. The action scenes are nice and violent, though this time there’s more focus on Mondo using firearms than the martial arts skills of the past. He still breaks a few necks with his arms and legs, though, and there’s even a part where he reminds Spiderman, the superfly pimp of previous volumes, of how he once killed a dude by hitting him in the balls (one of the more unforgettable scenes of Mondo #1).

Speaking of Spiderman, he has a much stronger presence this time out. Always a fun character, Spiderman slouches around New York City at Mondo’s threat/request, scoping out places and gathering intel from the underworld. Spiderman himself is pretty tough, but as he sees Mondo and Kisaka in action he realizes that these two guys are in a whole different universe, and soon becomes frustrated with himself, figuring he’s gotten soft from bossing around hookers and not fighting on the streets like he used to. This leads the novel in unexpected directions, culminating with Spiderman issuing a challenge to one of Kisaka’s former students gone bad.

While the pace is better, and the dark comedy is much more pronounced (particularly a recurring “joke” about Spiderman beating his hookers, which actually is pretty funny, the way DeStefano tells it), there’s still something sort of missing from A Minute To Pray, A Second To Die. Actually, it’s moreso what’s there -- namely, too much back-and-forth about Mondo and Michi, with precious little plot development. An assassin will try to kill Kisaka (who gets injured multiple times but keeps on going, like a regular Energizer Bunny), Mondo will kill the assassin, and then Michi will show up to screw Mondo. That’s pretty much how the novel goes.

But as mentioned Mondo’s bad-assery is back in full force. He delivers many darkly comedic one-liners throughout, and his lack of basic hummanity is also pretty funny. But you can tell DeStefano was sort of grasping at straws; one of the subplots here is Mondo trying to reconnect with his feelings, mostly through Michi, but we already know that relationship is headed for a bad end. If DeStefano had not worried about making Mondo “human,” and instead just focused on the dark comedy, he would’ve had a trilogy along the lines of Gannon. But it would appear DeStefano cared too much about his character for that.

Anyway, this was it for Mondo, so it’s moot. There’s no final end for the character (that is, other than his friggin’ death in the first volume), but DeStefano does wrap up the Mondo/Michi deal on the last page. Michi has a recurring “die inside me” bit, where while she’s screwing a dude she’ll inform him how the French think of orgasms as “little deaths,” and as she implores the guy to “die inside” her Michi will reach up and jam the guy with a hypodermic needle. This bit doesn’t quite work with Mondo.

Finally, DeStefano was an artist – in fact he did the covers for the Pinnacle editions of the Richard Blade novels – but for some reason Manor didn’t retain his services for the Mondo covers. But who can complain when Bob Larkin turned in such a great one, with Mondo once again looking like a ‘70s Edward James Olmos after a few trips to the gym?
Posted by Joe Kenney at 6:30 AM

Hi Joe. Great to hear that vol 3 is a marked improvement on #2. I really must get around to reading the damn thing - it was murder finding a copy here in the UK, too!

And man, that cover might be one of THE most 70s covers ever!

You can almost smell the mandom!

Karlos, good to hear from you. Also good to hear you were able to get a copy of Mace #3. And "mandom" perfectly sums up the cover!