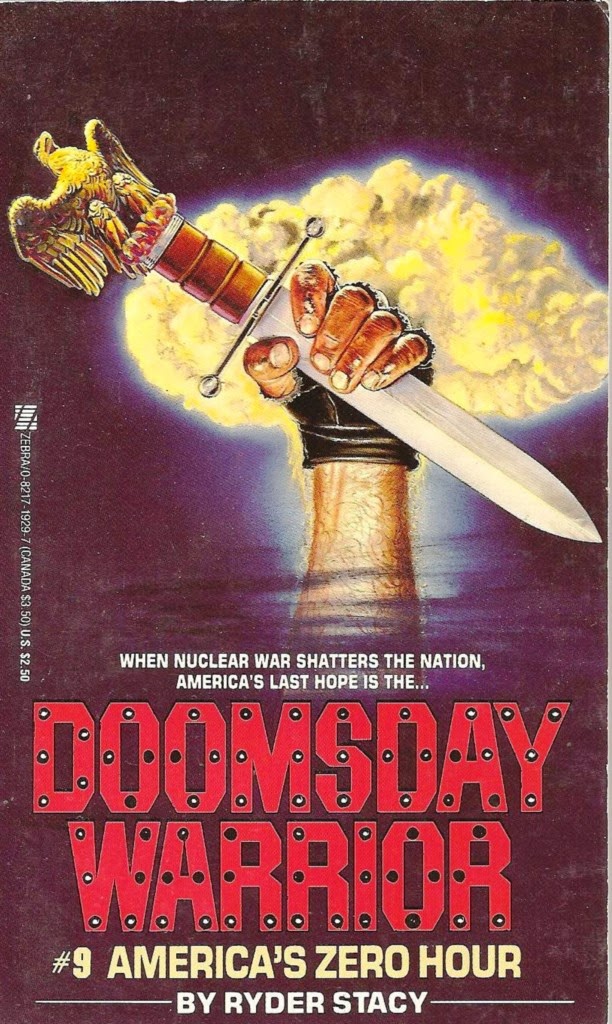 A month after the previous volume and things are still much the same in the Doomsday Warrior series; Century City is rebuilding itself, the Russian army is slowly reoccupying its former posts after Killov’s KGB sadists have been ousted, and Ted “The Ultimate American” Rockson is still stuck in the middle of a love triangle.

This installment opens with a veritable bang – three bangs, in fact. First there’s an underground explosion as Rockson and his pals try to clear out a tunnel beneath Century City and nearly get squashed. The second “bang” arrives when hotstuff Rona comes to Rockson that night, telling him she’s sick of staying away from him due to her agreement with Kim, and Ryder Stacy gives us one of his patented sex scenes. Indeed here we learn that Rona goes into a “special kind of mutant frenzy” when she orgasms!

As if making up for the fact that the previous volume didn’t have a single sex scene, Stacy immediately delivers another, as Kim comes into Rockson’s room moments after Rona has left. (The two women sneaking around behind each other’s back, we’re informed.) Apparently Century City must have a cosmetic surgery wing, as Stacy mentions Kim’s “large breasts,” whereas in previous installments we were informed how small they were! At any rate Stacy delivers yet another of his fun sex scenes here, where the prose gets nice and purple.

Another returning element in America’s Zero Hour is all of the little details the author(s) used to dole out. For example, we learn that Rockson’s night light is a pair of “twisted elk horns” which glow, softly illuminating Rockson’s room in red. But anyway trouble soon rears its head when security chief Rath informs Rockson that Killov, as he escaped the US, has gotten hold of a few nuclear missiles…ones with antimatter properties, even! Last seen venturing into Canada, Killov is expected to go all the way to the North Pole, where he’ll likely fire the missiles at both Denver (to destroy Century City, as he still doesn’t know where exactly it is) and Moscow.

Rockson puts together his usual team, accompanied by the usual redshirts. Stacy doesn’t even fool around with the Rona/Kim scenario this time, with Rockson saying flat-out he doesn’t want to hear their shit on the road again. So the ladies stay, and we get no more of Ryder Stacy’s patented sex scenes this volume. From here America’s Zero Hour returns to the feel of every previous installment, with Rockson et al trekking along the nuke-blasted terrain of the US and encountering all sorts of setbacks.

Along the way we have another teleconference between Rockson and Soviet Premiere Vassily, who agrees to send over a specialist who will be able to help Rockson track Killov’s stolen missiles. This turns out to be dumpy Majro Scheransky, who arrives to much fanfare, bantering with Rockson’s pals and even tossing some racist remarks at Detroit (whom Stacy reminds us is black every single time he mentions him), but soon enough per tradition Scheransky is shuffled right out of the narrative, just there in the background until the finale.

More new characters arrive with a group of Eskimos somewhere in Canada, who again per tradition challenge Rockson to a death match before believing he really is “The Ultimate American” and thus pledging their alleigance to him. Tinglim is their leader, and lots of Jack London stuff ensues as we learn about riding dog sleds over the ice and snow, on into the brutally cold North Pole. Meanwhile Killov rides in a vehicle armada which is somehow able to go right over the icy lakes which crack beneath the weight of the Rock Squad’s dogs…

The Killov sections introduce a new character to the series: Chrome, the “metal man,” a former SS commando from #5: America's Last Rebellion who now fights for Killov; we are told his face was “blown off” in that volume's climatic battle, after which he was rebuilt into a cyborg with “a face and skull of chrome steel” and “yellow synthsteel eyes,” and he’s so scary-looking that even Killov, who worships death, fears him. So in other words, Ryder Stacy had recently seen The Terminator.

More of those interesting touches appear with a nighttime battle during which the aurora borealis glows above as friggin Sasquatches attack Rockson’s party and steal away with some of them, roasting them over spits and eating them! From here a fantasy element comes in with the introduction of Ice City, a sprawling medieval-style city in the North Pole, built over a frozen lake and made up of spiraling towers and buildings, all made of ice. This sequence doesn’t have much to do with anything, though it does feature the “Ice Shaman,” who informs Rockson that the Sasquatches are the descendants of mutants created back in Atlantis…!

The finale occurs in the Arctic Circle on December 22nd, the Winter Solstice, Rockson timing his attack with the endless night that will ensue. His war party is drastically reduced by this point, with even juggernaut Archer out of commission, recuperating in the hospital back in Ice City after taking an axe to the head(!). But with Scheransky’s aid they’re able to sneak onto Killov’s makeshift fort and track down each antimatter nuke, dismantling all of them save for one, which blasts off – headed south, and thus likely for Century City.

Stacy delivers a positively endless fight between Rockson and Chrome, with Rockson using any weapon he can get his hands on against the impervious cyborg. It just goes on and on and on. Only after using water to fry Chrome’s internal circuits (surely this is something the programmers would’ve thought of?) so that he’s weakened, and then smashing his joints, Rockson’s victorious and commandeers one of the two jets sent to evacuate Killov (the KGB leader escaping once again, of course).

Here the finale plays off like a retread of #4: Bloody America, with Rockson using voice commands to fly a Russian fighter jet in hot pursuit as he chases after the missile. This entire sequence is very unbelievable to say the least, and breaks the laws of aeronautics, physics, and reality. Plus it isn’t very exciting, as it’s just Rockson sitting in a jet and trying to catch up with a missile. But of course he’s successful, with the side effect that his jet is destroyed and now Rockson is alone somewhere in the Midwest after parachuting out, his team all the way back in the North Pole.

So as per usual this volume of Doomsday Warrior ends on a cliffhanger, and despite the goofy finale you can be sure I eagerly await the next installment.
Posted by Joe Kenney at 6:30 AM

I have a couple of these, and someday I should read one for the hell of it...but every time I read one of your reviews that urge becomes more and more conflicted.

Jack, the goofiness and the enjoyment factor are usually neck-and-neck with this series, but in my opinion the good outweighs the bad. I guess if you think of it as like the literary equivalent of the old Rambo cartoon, you might end up enjoying it!

Ten bucks says the next book starts with everyone back in Century City like nothing happened.

I wouldn't be surprised if that's exactly what happens! And now that I think of it...the series actually pulled this once. I think in one of them Rockson's trusty hybrid Snorter was separated from him...but when the next volume opened, Snorter was right back there in Century City with Rockson.

My favorite Doomsday Warrior book is that one where Rockson has to make a perilous journey to deal with some new menace, but finds time to sex some ladies along the way and then at the end he doesn't kill Killov for some reason.

Only joking - my favorite is that one where Rock fights a cyborg Richard Nixon.

That's every volume of the series!!

Seriously though, if there's really one with a robot Nixon I'm greatly looking forward to it...I'm only just now about to finally get around to reading #10.

American Nightmare? Ironically the plot to that has nothing to do with the formula I describe above! I think it's the only entry in the series that doesn't, though - even the one where Rock travels into space to do the plot from Armageddon sticks to the basic formula to the point of near-parody.

I just started American Nightmare and I'm enjoying it. You're right -- a big change from the formula!

The volume I've been most looking forward to is American Dream Machine, the one where Rockson's apparently put in some hallucination-causing device.

Btw, thanks for your comments, I'm always happy to hear from a Doomsday Warrior fan!