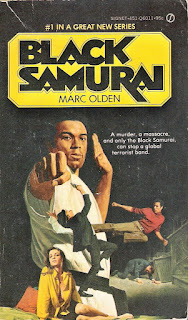 Good review, as always. I haven't been able to ID the cover artist for that series. Does anyone happen to know who it was?

Great review, Joe! I have owned this entire series for decades. I rabidly bought every single martial arts-related book as it was published as a teen in the 70s. Even then I knew that Black Samurai was a cut above the norm (pun intended), even if they came off a veritable assembly line from Olden. Olden's standalone later novels are really good as well, and he tends to keep some level of martial arts action in most of them.

Thanks for the comments, guys! Bob, unfortunately I don't know the artist ID. I assume it's the same person who did the covers for Olden's Narc series, though. And Steve, that's cool you got these as they were published. Did you watch the movie when it came out? I'm almost halfway through the second volume and enjoying it as well. As for Olden's later novels, one obscure one I picked up years ago is "Gossip," a fat paperback original from 1977 (I think), which seems to be his attempt at a glitzy trash fiction sort of read. I need to get around to it one of these days!