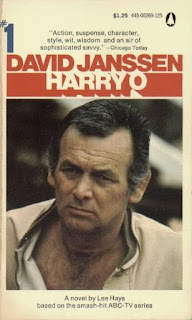 For your viewing pleasure, here's a link to where you can watch the second Harry O pilot film, "Smile Jenny, You're Dead." https://www.youtube.com/watch?v=5fDgjZCPxsQ

The first--and in my opinion, lesser--pilot can be seen here: https://www.youtube.com/watch?v=qP_nvvcdbWk

And a fairly thorough story about Harry O and its development can be enjoyed here: https://crimereads.com/harry-o-tv-private-eye-series/

What sets HARRY O apart from other TV private eyes won’t be reflected in a novel, and that is David Janssen. Most of the series plots are nothing special (with exceptions, such as the brilliant “Gertrude”), but they are expertly carried by Janssen’s patented world-weary nature. His banter with, first, Henry Darrow and later Anthony Zerbe is likely the strongest PI/cop relationship on TV, and that includes Rockford/Becker.

I think I'm more of a Cannon guy myself.

I really appreciate your reviews of TV tie-ins ... I had collected a huge number of them as a youngster, but traded them in for "more serious" literature as I got older, dismissing them as a youthful indulgence. More recently, I've regretted the trade-in, so I feel less guilty when I read your reviews stating that many of them were mediocre.

This Harry O novelization was one of my trade-ins.

Thanks for the comments, everyone -- and thanks J. Kingston Pierce for the links to the Harry O pilot films! And Marty, I definitely see what you mean -- the actor would make a huge difference. As it is, Hays's novel just comes off like your typical P.I. tale with its world-weary narrator. And Teutonic Terror, I know just how you feel...20 years ago, before I got married, I took a HUGE box of books to a Half Price Books to "make room." I STILL regret trading them in!

The first season of Harry O was very very good indeed. Slightly quirky, but not in the same way as The Rockford Files. The second season was disappointing although watching David Janssen and Anthony Zerbe together was fun. The original Harry O pilot episode is superb, but it was too unconventional for network execs to be able to cope with.