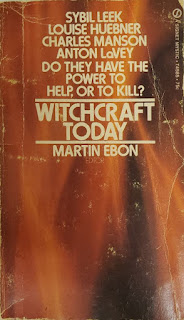 I don't think there was ever an "explosion" of Satanism in Canada ... in fact, all it took was a Victoria, BC therapist and one of his patients to co-write "Michelle Remembers", which became the template for "false memory" claims about Satanic abuse in daycares and in custody battles across North America. My cousin went to prison because of one such claim ... and when his son turned 18, the son admitted that the social worker and the estranged mother had coerced him into telling lies about his father.

Wow, that's a crazy story. I hope the mother faced some sort of legal penalty for ruining your poor cousin's life! Never heard of "Michelle Remembers." I did read Maury Terry's awesome "Ultimate Evil," though, a late '80s book which conjectures this underworld satanic crime ring, complete with figures like "Manson II." I meant to review it here on the blog back when I read it several years ago, but never got around to it. It certainly inspired at least a few men's adventure novels, though, from Mike Newton's Night Kill to the obscure Psycho Squad series. Anyway, thanks for the comment!

Yes, last I heard his ex-wife was getting treatment for something or other, but I have no idea if the social worker ever paid for his professional negligence. Here's a link to how that single crazy book touched off the Satanic Panic around the world, as well as influencing a bunch of horror novels: https://nationalpost.com/news/canada/the-canadian-book-that-tricked-the-world-into-believing-they-were-overrun-with-satanist-murder-cults