The Torture Contract (The Marksman #19) 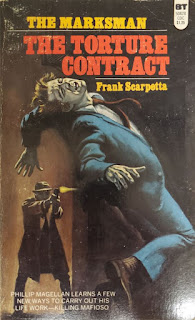 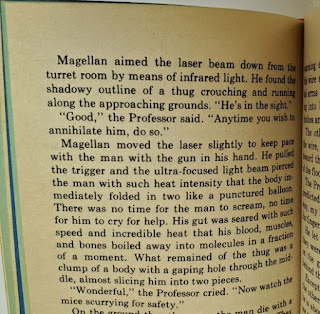 Meanwhile the Professor kills off other Mafioso with an electric fence, and even more crazily he has a trapdoor that drops a few of them into acid. And he laughs and laughs like a madman throughout, Sherman doling out the lurid weirdness in that bland style of his, just blunt declrarative statements, which only makes things even weirder. But anyone can plainly see the Professor is nuts. I mean he literally rolls on the floor in laughter when mobsters are killed, and later on he forces one of his lackeys into becoming a live subject of vivisection – the corpse to be mummified by resident expert Penword Suite. But the novel proceeds to get even weirder. Angela has taken it upon herself to propose to the Professor that she, Magellan, and Johnny Sin should become “partners” with the madman. Angela was very excited during the Park Avenue heist (indeed, we’re even bluntly informed that she, uh, got wet during it – again, the grimy vibe predominates), and now she wants to work permanently with the Professor…only as an equal. This has unexpected repercussions, and Angela finds herself forced into those sex experiments in the Professor’s lab. As she later relates to Magellan: 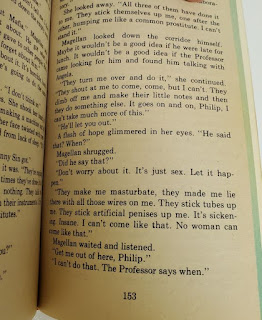 Yeah, crazy shit for sure. “They’re making a machine out of me,” Angela tells Magellan, and the reader can’t help but wonder if Angela means this in the figurative sense, ie the three scientists are, per the dialog above, screwing her constantly like a veritable sex machine, or if she means it literally – that the artificial female the Professor hopes to create and sell is actually being based on Angela. Unfortunately we will get no resolution on this. Instead, Angela is desperate to escape…and Magellan, who has somehow become emasculated in the Professor’s employ, cagily seems to want to help her escape, though he too as mentioned is now scared of the Professor, so Magellan doesn’t want to rock the boat. The guy who in previous volumes would cut off Mafioso heads and carry them around is now afraid of a ranting old psychotic! But our lame hero does manage to propose to the Professor – over dinner! – that Angela be sent out of the fortress on some errand, and the Professor agrees.
This takes us into the climax, though we don’t even realize it’s the climax: the Professor has it that a Hollywood-based Mafia don named Fiori was behind the attack on his fortress, and he wants Magellan to kill him. But Angela will be used as bait, and apparently if she does well she can go free. So Magellan and Angela leave the fortress, and only here does Magellan notice what a sexy broad Angela is, now that she’s dressed all slutty to catch the sleazy Fiori’s eye. But Angela herself has realized how hot she is…and take a gander at this bit of ‘70s-style female empowerment: 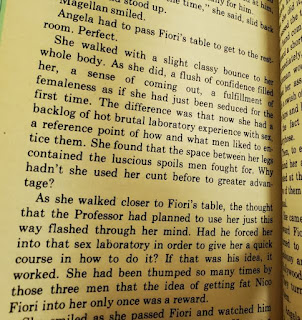 I’ll refrain from spoilers here, but even in this sequence Magellan is emasculated. Angela is to lure Don Fiori off to some secluded spot for sex, and Magellan is to swoop in for the kill. And yet Magellan, for reasons never explained, just disappears while Angela rides off with the don, still not even showing up while Angela’s having sex with Fiori on the beach – the sole sex scene in the novel, and not even that explicit. When Magellan finally shows up, even here it takes him forever to take out of Fiori and his men, and the Mexican Standoff with Don Fiori at the climax is insulting to anyone who claims the title “The Marksman;” Magellan literally just holds his Beretta on Don Fiori and keeps telling the mobster to drop his gun, “The Marksman” apparently unable to get a clear shot. This whole bit seems to go on forever.
Now we’re going to get into some spoilers, so skip this paragraph and the next if you don’t want to know. Sherman again shows how fearless he is in his approach to the series. When Magellan learns via a panicked Angela that she offered Don Fiori a deal (ie for Don Fiori to give Angela protection if she gave him information on the Professor in exchange), Magellan solves the problem of not being able to get a clear shot at the don: he shoots Angela, I mean shoots her dead, and then blows away Fiori. So this is acceptable because we readers already know Philip Magellan himself is insane, and Sherman has worked up the angle that our sadistic hero hates anyone who has anything to do with the Mafia…even for something as relatively minor as offering to make a deal with the Mafia. Okay, whatever. But we readers are still waiting to see the Professor get his own comeuppance, or at least to see what happens next in the Magellan-Professor relationship. Instead, the novel just ends!
Now this has happened before, both in The Marksman and The Sharpshooter. Abrupt, “what the hell just happened?” finales are pretty much standard for this series, so I shouldn’t have been too put out this time. But dammit! I mean I wanted to see Magellan finally confront the Professor…maybe even brave his torture-trap fortress to show the old madman who the real top dog was. But it doesn’t happen, and the book literally ends right as Magellan blows Don Fiori away. And since this was the sole volume written by Steve Sherman, I’ll hazard a guess that the Professor will never be mentioned again. This is what I meant by the Sicilian Slaughter comparison; that Executioner novel too featured a main villain who was never seen or mentioned again, leaving readers to forever wonder what was supposed to happen next. And I mean so much is not explained, like for example the Professor’s omniscience – not only does he already know who Magellan is, but there’s also a bit where he’s managed to swipe a Beretta Magellan keeps hidden in the Los Angeles airport. How did the Professor even know it was there?
Well, I went into all this detail because I have to say one thing about The Torture Contract: it kept me wondering what would happen next. Sherman certainly puts the reader as on edge as Angela Peabody, sticking his characters in a remote fortress with an insane madman. The setup was so outside the series template that I actually enjoyed it all – to the extent that I wish there had been more of it. But as mentioned this was, for whatever reason, Steve Sherman’s only novel for the series. Who knows, though…maybe someday someone might write a pastiche sequel that finally tells the rest of the story.
Posted by Joe Kenney at 6:30 AM

Great review. I scored a mint copy of this one in an eBay auction that also included a bunch of other Marksman books, so I have a nice set of them now; can't wait to dig in.