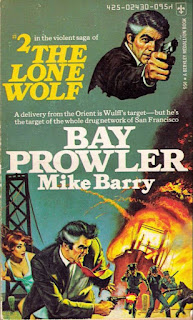 Great review. And, thanks for IDing Mel Crair as the cover artist!

My incentive to live a good clean life is that I want to live long enough to read your reviews of all the Lone Wolf books.

I think his name was originally Wulff Conlan, but that sounded too close to the name of a real person, possibly Groff Conklin, an anthology editor (lots of sci-fi anthologies that I read as a kid), so they changed it, but missed a few references. And then there's the whole change of his name from Burton Wulff to Martin Wulff and finally Martin Burton Wulff, or maybe the other way around.

When I reread these everal years ago they blew me away. Almost the anti-Executioner in tone, style, and worldview. Great series.