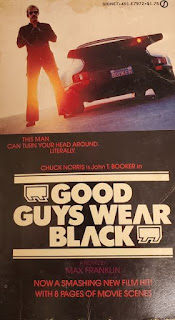 (Zwolf) You're not missing too much, not having seen the movie. It's pretty slow, and there's only one real highlight -- Chuck jumping through a car's windshield to kick a guy. Which, o' course, would've broken and lacerated his legs in real life, but it still looks pretty cool. Other than that, I remember it being very sluggish. Most of Chuck's early movies are pretty dull, as are most of his later movies. It's those Cannon films in the middle where all the good stuff is -- Invasion USA, the Missing In Actions, Code of Silence. Although Silent Rage is kind of an early one and it's got its good points.

I'm a soft touch for the early Norris movies, though if I'm honest, GOOD GUYS is not a great film. Chuck is surrounded by a really good cast in a movie that is more of a government conspiracy thriller than action piece. Dana Andrews is in it, but looks sick (drunk?) and seems to have been dubbed by Jonathan Harris.

The INVASION U.S.A. novelization is great! I bought it off Amazon for one penny!

If you didn't like the book, you're going to hate the movie. Trust me, the book sounds like it was a direct translation of the film.