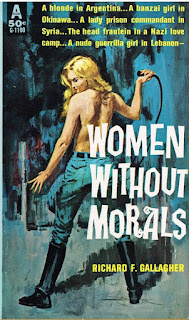 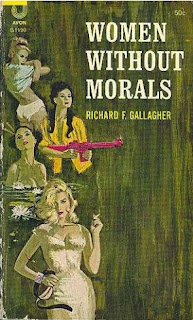 So in one of the stories the protagonists is rescued by Nazi's?

Very cool! I wasn't aware of that one. Thanks, Joe!

Thanks for the comments! And Matthew, yes -- I forgot to elaborate in the review, but Nazis free Kolinsky at the end of "The Commandant's Wife." This is before the US and Germany are at war, though the Nazi officer confirms that "Kolinsky" isn't a Jewish name! (It's Polish.)

Hi, My name is Matthew Krueger, Richard Gallagher's nephew. Richard passed away from natural causes yesterday at age 96. He was a marvel and a gem who really had exactly the life he wanted, filled with MANY blessings. He's also blessed all who love him with tremendous gifts and countless fine memories. Rest in peace, Richard, we will miss you, but will always carry you in our hearts.

R.I.P. He was a great writer. I've read many stories he wrote for men's adventure magazines.

Thanks! He ended up getting a nursing degree from Columbia and worked is an ER nurse in Manhattan up until about 16 years ago.

Hi Matt, thanks for the comment! Sorry to hear your uncle passed away, but on the other hand it's awesome to hear he lived to be 96. I'm hoping he was aware that there are still people out here who enjoy his stories!

Thanks, again. I'm not sure he did know, but he really didn't think about that kind of thing so much. Still it's so great to hear and I'll pass the sentiments on to my aunt!