I Am Legend (aka The Omega Man) 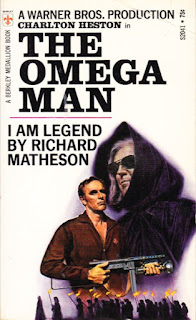 I always thought of I Am Legend as a good, but not great book. I read during October when I tend to read a lot of horror.

Perhaps it's a parable of progressivism. After so many nights followed by paralyzing days, they have finally found a way to create an endless night, as they search for the Nevilles that are still standing to liquidate them. I hope that one day you will comment on "This Perfect Day" by Ira Levin.

Matheson tended to do story themes which concerned characters confronted by an alien threat which they were helpless against and then learn to accept as an inevitable or good thing--and I Am Legend has the same idea.
If Matheson had done a Men's Adventure Fiction approach to the story--it would go very differently. I imagine he would have been using dynamite to search for their hideouts instead of going room to room.

The Vincent Price version is a little more action oriented (one of the very few Price movies where he is using a gun) and the Heston version has him shooting them up (though this happens after he finds the kid dead).
At the end of the Omega Man, Heston is given a "jab" of sorts.

eh. I guess reading your blog was fun for a while? Too bad you turned out to be a freedumb addict. Enjoy your brave life of angrily declaring that Y'all's Ain't Mah Daddy!

Sorry to come so late to this post -- but I've come across your blog just a few weeks ago and have been obsessively paging through it. (I used to know Warren Murphy and Ric Meyers, back in the day.

I hadn't thought of The Omega Man since seeing it in high school back when Dinosaurs Ruled the Earth. Based on this, I pulled out the DVD and gave it another look.

At the risk of being too political (apologies if this is inappropriate), but where you see TOM as a parable of COVID, I was struck by the parallels to ANTIFA and BLM. They desperately want to tear down Western Civilization and replace it with something fairly diseased (though they see it as "pure") with only a few increasingly overwhelmed individuals fighting to preserve it.

I write about Heston's persona in Planet of the Apes in my book It Came From: The Stories and Novels Behind Classic Horror Fantasy and Science Fiction Films. His past filmography and the roles he played -- Gen. Gordon, Michelangelo, El Cid -- are central to his success in these Last Man of the West parts he played in the 60s and 70s.

Thanks for the comments, everyone! Sorry for the delay in response but I was really busy in the weeks before Xmas and barely had time to post these reviews. KG, loved your note on Heston getting a "jab" at the end of The Omega Man!

Halojones, your comment really confused me, so I figured maybe you were drunk when you wrote it? Maybe my reading of the vax upset you? If it makes you feel any better, I am vaxxed, but haven't lost my critical faculties -- I mean keep in mind, for the past year we were told that, without question, all the vaccines were perfectly safe, and how dare you think otherwise, you MAGA hat-wearing, Trump-supporting bigots! And look how quickly that particular narrative changed. "Uh, maybe you shouldn't take the J&J shot...but the others are totally safe, we swear!" I can only imagine the legal commercials that will pop up on TV in the next decade. ("If you or a loved one took one of the vaccines...") Also, I've gotta say it's a perfect commentary on our age when a desire for freedom can be mocked.

James, really enjoyed your comment, and I have no problem with politics being brought up, as you've no doubt noticed by now. A lot of these old books bring up stuff we're living through today. Really enjoyed the BLM/Antifa reading of the novel...definite similarities to the "new society" mentioned at the end of I Am Legend, even up to them acting as judges and executioners. (They don't want to defund the police, they want to be the police.) But as with the protagonist of this novel, I think those who fight to preserve Western Civilization are doomed. It all factors into my theory on the procession of the equinoxes, and Pisces becoming Aquarius...let me get out my Carnac the Magnificent hat and tell you more!

Oh, and cool to hear you knew Warren Murphy and Ric Meyers...I've got all of Meyers's ninja series novels and need to get back to them. That guy had a seriously twisted imagination!