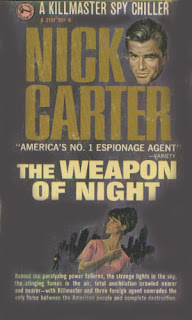 I know they're thought of as the perfect ones, but I wish that you couldn't practically COUNT ON Nazis to be the villains in these kinds of stories (and a lot of others), because it gets so predictable.
I know I harp on it, but one exception for me is Destroyer # 2, and that's because of the really wild scenes between the Remo character and the "Nazi chick" (as one reviewer calls her). Do you have any plans to review it?