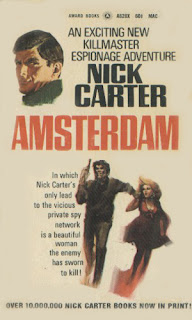 My dad was a European, and widely traveled, so he liked the Nick Carter books partially for the travelogue, which he said were usually surprisingly accurate. Sometimes they'd mention streets he remembered, etc. But even he would've been pissed if a couple enemy agents didn't get snuffed along the way. I'm always amazed when I find "action novels" that don't have any action in 'em. I really don't get it, since that's usually the funnest part to write.

O' course, if they did a modern re-write of the Amsterdam volume, it might not have much action either, but that'd be because Nick probably got peaced-out by indulging in all that weed the place has become famed for... :)