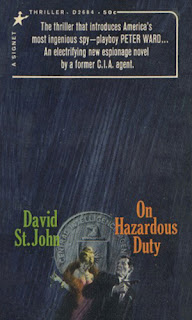 On Hazardous Duty, by David St. John
October, 1965  Signet Books
Yet another in the tide of secret agent series paperbacks that tried to jump on the James Bond bandgwagon in the ‘60s, Peter Ward is most notable because it was actually written by a spy: none other than E. Howard Hunt, who would go on to infamy for his role in the Watergate scandal. However this was not known in the ‘60s, when the series was first published; Peter Ward was credited to the pseudonym David St. John. Signet, trying to make a buck out of Hunt’s infamy in the ‘70s, reprinted some of the books with new covers, crediting Hunt with the slugline “convicted Watergate co-conspirator.”*
The series ran from 1965 to 1971, going through a few publishers. The later ones were also notable in that they received hardcover editions prior to the paperbacks. Years ago when I was on a ‘60s spy-pulp kick I collected the majority of the Peter Ward books, and started on one of them, One Of Our Spies Is Missing (ie the sixth volume in the series), before I’d gotten this first volume. But friends I found the book so boring I couldn’t even finish it. Despite this I came across the earlier volumes for a pittance a few years later and decided for the hell of it to get them anyway.
In fact, the series made such little impression on me that a little over four years ago I reviewed the fifth volume…and forgot all about it! But judging from the date I posted the review, my son was only two months old at the time, and honestly I don’t have much recollection of anything from then. Reading the review, which I don’t even recall writing, it’s clear to me that the Peter Ward series overall is likely a slow-going affair, as this first volume is just as sluggish as the fifth one. About the most positive thing I can say about On Hazardous Duty is that it’s at least better than the first Bond novel, Casino Royale, but that ain’t saying much.
But then, Peter Ward is cut from the same cloth as Fleming’s initial take on Bond: he’s an overly stuffy sort in his 30s who seems more into brand names than going out into danger. He’s a total blueblood, living in his estate in Virginia where he likes to ride horses and smoke a pipe in his lushly-appointed den. Hunt’s presentation is likely realistic; his CIA is made up of fellow bluebloods who approach international espionage as if it were a game. Perhaps this was true of the CIA at the time, in particular the right-wing sentiments; the “Sovs,” as Peter Ward refers to Soviets throughout, are the bad guys, and the goal of the agency is to halt the progress of communism. One wonders what some of these guys would’ve made of current CIA agents!
The opening is one of the highlights of the novel, and one of the few action scenes. We meet “Peter,” as Hunt refers to him, on the job: pulling a job behind the Iron Curtain. The entire bit is suspiciously similar to the Watergate affair, with Peter and his team looking to break into an office late at night to take some photos of various documents. Peter Ward is not an action-prone secret agent by any means. In fact, his specialty is “agent handling.” He sends off his two underlings to do the dirty work while he sits in the control room, sipping drinks. Tension inserts itself when a guard suspects something, and here’s one of the few times where Peter does anything – he slips across the street and shoots the guard with a knockout dart, courtesy his “gas gun.”
Speaking of which, Peter’s spy gear is reminiscent of the gadgets featured in the later John Eagle Expeditor series, to the point that I wondered if series producer Lyle Kenyon Engel had been inspired by this book. This isn’t outside the realm of possibility, as Engel was an avid reader and often took inspiration from other books. Just like John Eagle, Peter mostly uses a dart gun. And later in the book he even slips into an outfit similar to Eagle’s gadget-stuffed “plastic suit:” 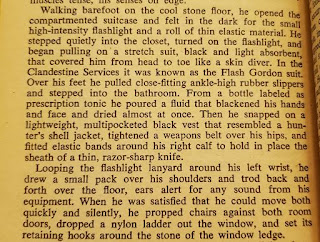 This sequence occurs late in the book, by the way, and is the other highlight of On Hazardous Duty, with the caveat that in this later scene Peter doesn’t shoot anyone. In fact, the only person he shoots in the entire novel is the guard in this opening sequence, and he only knocks the guy out. Overall the novel is a bloodless affair, very tame on the violence…and all the sex is off page. In fact the stuffy, blueblood vibe of Peter Ward extends to the novel itself. But I can’t say I hated the novel, as Hunt certainly has a gift for writing fast-moving prose, even if nothing’s exactly happening. I also enjoyed the insider’s peek at the CIA and the typical attitude of the agents of this era. I approached the novel with this mindset, not expecting anything major given how boring I’d found that later volume, so I wasn’t unduly disappointed by the sluggish pace.
Peter’s main mission this time is pretty involved; a Russian scientist plans to defect, and Peter is to meet him at the Montreal airport and smuggle him away from his KBG handlers. Somehow this entails Peter flying over to Europe and then to Ireland to set up his cover; part of Peter Ward’s schtick is his mastery of disguise. But again it just makes me wonder how much money the CIA was wasting on airfare, as he needlessly flew all over the place in The Venus Probe as well. To make things worse, the scientist flakes out at the airport and is hauled away by KGB goons. The smuggling operation is a failure; in other words, this entire quarter of the novel has been for nothing. Not to be deterred, Peter sets his sight on some other Russian scientist and decides he’ll try to get him to defect! It’s pretty sad that even though it’s only the first volume, the author’s already having trouble coming up with a single plot to fill the entire book.
So Peter heads over to Paris, where the novel spends the rest of the duration. I forgot to mention, but Peter has a sort-of girlfriend here in Paris, Valerie, a “mannequin” who apparently is an old flame. Also, Peter still carries a torch for his dead wife, Su-Lin, who was killed some years ago in a bombing meant to kill Peter himself. But it’s nothing to get excited about, as Hunt’s just as reserved in the sex material as he is in the action. For instance, early in the book Peter gets lucky with some socialite near his Virginia estate, and Hunt leaves the shenanigans as, “[they] very slowly began to make love.” The same goes for Valerie later in the book, as well as Nicole, a fellow “mannequin,” which I presume must mean a model. Peter scores frequently with them both, but always off-page.
Nicole is dating the Russian Peter plans to defect, Belkov, and Peter uses her to get into the Russian’s confidence. It’s all very tepid and slow-going, and eventually winds up in a vinyard outside Paris where Belkov has gotten involved with some local commie factions who plan some nefarious activities. Peter discovers their cache of weapons on the estate grounds when he suits up in the blacksuit in the excerpt above, but as mentioned it doesn’t lead to any action. Peter Ward, in this novel at least, is much more of a “stick in the shadows” type, and not much for direct confrontation. Even the finale seems like something out of a Mystery novel, with lots of exposition from Peter and the assembled villains – and Peter doesn’t even kill the main bad guy.
I would conclude with “here’s hoping the next volume is better,” but I’ve already read some of the later volumes, and I know they aren’t. But I’ll keep reading Peter Ward anyway, mostly because at this point I just enjoy the topical mid-‘60s details. Hunt does a good job at this, and peppers the narrative with brand-naming that would please Fleming, a la, “Peter laid a stereo tape on his Grundig recorder.”
*Signet only published the first six volumes of Peter Ward, and I assume it was a low seller for them. I have some of these early ‘70s reprints, and they still say “first printing” on the copyright page, with a 1965 date. So then I’m assuming the books sold in such low quantities that Signet had plenty of unsold stock on hand and didn’t need to do up another print run; they just whipped up some new covers and put them on the original printings.
Posted by Joe Kenney at 6:30 AM

Hi Joe - Always love your honest reviews. Is there any cover artist credit in that one?

When USA betrayed its Ward/Hunts, the debacle began.

the “Sovs,” as Peter Ward refers to Soviets throughout, are the bad guys, and the goal of the agency is to halt the progress of communism.

Yeah, Hunt was certainly a True Believer in the Moral Crusade Against Communism. And in his time at the CIA he was involved in some pretty murky operations. Including, according to some reports, overthrowing the Australian Government.

I guess I prefer spy fiction that is a little bit morally ambiguous. Mind you the full-on Cold War hysteria can be kind of amusing.

'Bout time for you to read some early Sam Durell, Joe.

Thanks for the comments, everyone! Bob, there's no artist credit that I can see. Johny and dfordoom, Hunt's interesting because his name often comes up in conspiracy theory circles. I've even seen him tied into JFK assassination stuff, with the mention that his whereabouts for that day are unknown or somesuch. Personally I think it's high time to start up another of those Moral Crusades Against Communism...I mean, speaking of JFK, it's kind of nuts when you consider that the party of JFK is now run by people who share the ideology of Lee Harvey Oswald! I've been seeing a lot of JFK in the Space Race docs I've been watching, and his patriotic, "America First" sentiments are way out of line with his party's current agenda. And Marty, I've got some early Sam Durells, and should read them someday!