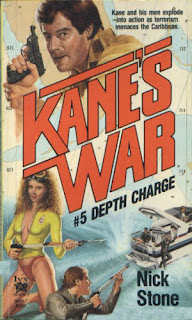 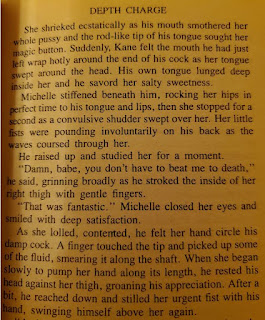 But this is just the tip of the veritable iceberg. Later on we have a bit where Paul Kavouris has sex with his mistress Rachel, a stacked redheaded widow who becomes manager of Neptune’s Palace (and ultimately will become the “third babe” Kane himself enjoys in the novel). This part is so randomly bonkers that I just had to share it: 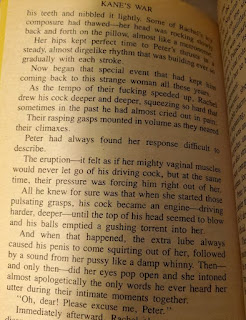 As mentioned Kane gets his turn at the wheel with Rachel, leading to even more bonkers filth: 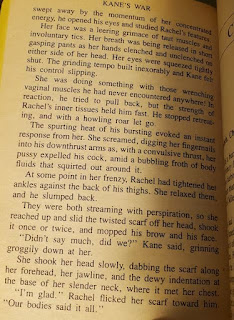 And this crude vibe extends to the entire book, complete with random exclamation points in the narrative. Again, the feel is very much of a Leisure offering from the decade before. But the sleaze can’t save the book, because too much of it is given over to egregious page-filling. Through Max’s somnambulic mumbling, Kane learns of an infamous assassin nicknamed “Feathers” due to his favored method of kills – feather-tipped darts. Ultimately this has Kane constantly cornering a local gaddabout named Sir Max and accusing him of being Feathers, or of hiring him. And yeah, that’s “Sir Max;” rather than the Hirschfeld-esque potboiler beneath the sea I was hoping for, Depth Charge instead concerns itself with stuffy upper-crust British types, like a notoriously “fabulous” old lady named Adelle.
After the interminable attacks on Kane – I mean he’s even shot at while merely fishing with Kavouris – we get back to Neptune’s Palace, which soon will open to its first round of tourists…who happen to be those stuffy upper-crust Brits. The author brings the recurring characters here, with Michelle getting a job – it’s implied so she can ensure Kane doesn’t get too cozy with either of the “mermaids” – and Ganja also working in the place. But as mentioned any chance to exploit this exotic setting is squandered. Promptly upon Neptune Palace’s opening it’s hit by those titular “depth charges,” and pretty much the entire place is destroyed! I mean there’s no part where we see the various characters interacting with this plush underwater resort, complete with its view of the sea and its nude mermaids.
Even the proto-Die Hard connotations are squandered, as the underwater action’s over quick and things go topside, with Kane and comrades blasting away at the villains. But this only leads us to that ultra-lame “climax” I mentioned earlier, with Kane assembling all the various one-off characters and grilling them to discover who would want to destroy Kavouris’s underwater resort. It’s all incredibly lame and almost reminds the reader of the climax of the average episode of Scooby-Doo. Even worse is this “Nick Stone” has no feel for drama; one of the new one-off characters is killed in the action at Neptune’s Palace, and the death is treated like an afterthought.
That said, Depth Charge moves incredibly fast for a 281-page book. I’d love to know who the authors were who worked on this series; maybe it really was J.C. Conaway who wrote this one. I guess we’ll never know.
Posted by Joe Kenney at 6:30 AM

I have a question about a piece of"glorious trash",a Sixties crime novel about a male/female crime team that the cover blurbs compare to Steed and Mrs.Peel gone bad; I don't remember her name, but the man's name was Michael Bliss.
Any information would be welcome.

Don't mind me, I'm just writing down some notes on terms NEVER to use if I ever decide to write a sex scene. :)

Thanks for the comments, guys! Alan, I'd love to be able to help out with that series, but it's not one I've heard of. My first thought was of Archie O'Neil's Jeff Pride series, as that had a sort of Avengers motif with the narrator hero and his Peel-esque assistant, but his name of course was "Jeff Pride" and it was a series from the '70s. Maybe someone else out there might know?

Zwolf, you're correct, definitely has the vibe of some sort of '80s splatterpunk. The icing on the cake is the typo in the first excerpt ("...he savord her salty sweetness..."), which just makes it seem even more bonkers.

The novel was Seventies, I think, and was a standalone.