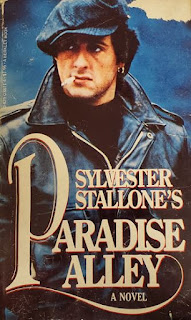 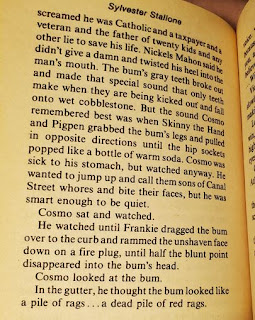 But now Cosmo wants that damn monkey. So at the neighborhood hangout Mickey’s Bar (surely an in-joke reference to Rocky’s trainer) Cosmo challenges Nickels: if Victor can beat Nickels’s hulking stooge Frankie the Thumper in an arm wrestling match, then the monkey is Cosmo’s. Otherwise Cosmo will owe Nickels a lot of money. This is where the brothers first learn the untamed power Victor has at his disposal, and also where they learn that he’ll only fight when his brothers believe in him. This will be the first pretense toward the main plot, but before that we’ll have more material with Cosmo’s schemes, like for example his plan to line up some drunks and tell them a dead hooker is really just “sleeping.” Tom Wright illustrates this scene, of Cosmo and Victor standing over the hooker’s corpse in the funeral parlor: 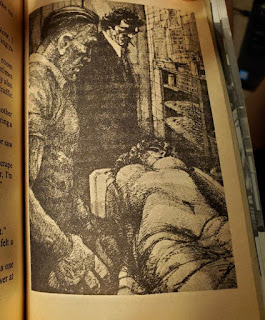 But it’s not until around page 100 that we get to the wrestling setup, and it’s a spur of the moment thing, as Cosmo again eagerly volunteers Victor’s brawn. A “colored” fighter named Big Glory has remained undefeated in the ring at Paradise Alley, where people can bet on the fighters. Cosmo, apropos of nothing, dubs Victor “Kid Salami” and talks him into fighting Big Glory, which Lenny is opposed to. But Victor again proves his worth in the ring, which takes us into the main plot, of Victor becoming a famous Hell’s Kitchen wrestler, working his way up on the underground fight circuit. Here too Stallone reveals that Annie and Lenny were an item before the war, and Cosmo gets his heart broken when he sees the two back together.
Also here as mentioned Lenny gets a personality overhaul; whereas the first half of the novel he’s taciturn and introverted, with Victor’s success in the ring Lenny turns into his aggressive manager, pushing Lenny further and further. This comes off as very awkward given that there’s not much setup for Lenny to suddenly become such a prick, but Stallone does sort of cover for it, as previous to this Cosmo gives Lenny a “what the hell happened to you?” speech, where he accuses Lenny of being a fool and rushing off to prove himself in the war…and coming home with nothing to show for it but a bum leg. (As I say, Cosmo is pretty unlikable at times.) Shortly after this Lenny’s not only rekindled his relationship with Anne, but he’s also become a new man, pushing Victor around like a proto-Don King. He also comes up with the schtick of hanging actual salamis on Victor before he enters the wring. But the implication is that Cosmo’s speech has spurred this change, serving as a moment of clarity for Lenny.
Cosmo for his part becomes Victor’s trainer, leading to more goofball stuff, like Cosmo making Victor through radiators and such. Again, nothing on the par of running up the steps to the Philadelphia Museum of Art, but still entertaining in its own right. As for the wrestling matches, Stallone doesn’t dwell on them much. They’re for the most part rendered in a few sentences, and only occasionally does Stallone give blow-by-blow action description. There is though this phenomenal sentence when Victor knocks out one of his opponents: “Patty McLade dropped to the floor like a whore’s nightgown.” Again it comes down more to character, with Victor losing his lovable nature and becoming more of a “killer” in the ring. Unexpectedly here Stallone goes for the heart strings in a sequence that comes out of nowhere but leaves the longest impression on the reader: on Christmas Eve, a drunk Cosmo comes across Big Glory, the black fighter Victor defeated on his path to wrestling fame, and the two men carouse around Hell’s Kitchen, trading goofy dialog; a sequence that leads to a surprising, and touching, climax.
The same can’t be said for the actual climax of the novel, though; Nickels Mahon, planning revenge on the Carboni brothers, gets Frankie the Thumper into his own wrestling career, leading to a final confrontation between the two giants in Paradise Alley. At this point the Carboni brothers are split asunder, with Victor a sadistic brawler, Lenny a heartless bastard, and Cosmo hating Lenny not only for taking Annie from him, but for being such a merciless controller of Victor. But the brothers reuinite during this climactic brawl, after which things get back to how they were at the start of the novel. Stallone goes for a circular approach, implying that the Carboni brothers can never leave Hells Kitchen, but by novel’s end it’s clear that there’s no place they’d rather be.
So in closing I have to say I enjoyed Paradise Alley more than I thought I would. It’s a fast-moving tale for sure, and Stallone shows his screenwriting nature by sticking mostly to colorful dialog instead of scenery description. I did feel that the wrestling angle wasn’t properly exploited, but I’m assuming the movie goes into more depth in that regard. I’m also curious to see if Cosmo’s various schemes make their way into the film. Speaking of which, Stallone clearly intended to play Cosmo, as he’s the main protagonist of the novel, appearing more than either Lenny or Victor. But as mentioned Tom Wright must’ve been under the impression Stallone would play Lenny, as evidenced by this illustration of the cane-wielding Lenny looming behind Victor: 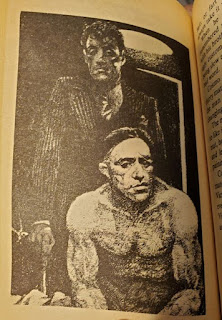 I've seen the movie, but it was a while back so I don't remember much. I do have the DVD and should probably revisit it. The main things I remember is that, yep, Stallone was still trying for a "serious actor" kind of vibe after Rocky, but it didn't quite work. Not that he's a bad actor at all, but he was meant for Rambos and Cobras more than he was Paradise Alley or F.I.S.T. (neither of which are really bad, but nobody's going to rank them with The Godfather or anything, which I think is what Sly was hoping for). Mostly what I liked about Paradise Alley is that Terry Funk was in it. Terry Funk's autobiography (More Than Hardcore -- one of the best wrestler bios out there, dude worked with EVERYbody in just about every era) mentions the movie a good bit. Funk should've gotten to do more acting.

I bet Tom Wright is the same Tom Wright who created all the paintings for ROD SERLING'S NIGHT GALLERY (a book of them just came out) and later became a television director.