The New Stewardesses #2: The London Affair 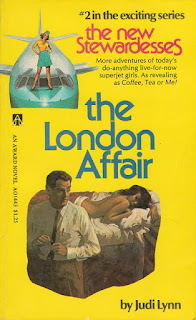 The second installment of the three-volume New Stewardesses series is titled “The London Affair,” but friends, the titular stewardesses are in and out of London within the first several pages. This is very funny, given how much the previous volume built up the trip to London. The stews actually spend more time in Montreal, with the majority of the tale set in New York City. But then I don’t think “Judi Lynn” put much planning per se into the series, as these “novels” really come off more like arbitrary short stories featuring an easily-confused cast of characters.

And boy are they easily confused, mostly because the author does nothing to vary their personalities. Or for that matter, to even friggin’ describe them. Whoever this mystery author was, she or he is very much in the Irving Greenfield mode; if you missed the previous book, you’re just shit outta luck. There’s no recap of the first volume, no re-introduction to any of the characters or their ongoing plots. But those of us who did read the first one will recall the climactic events saw most of the stews on a flight to London. Well, they arrive on the first page of this volume…and the author, same as last time, does zero to bring the locale to life. If you are looking for a glimpse of swinging ‘70s London, you won’t find it here.

What you will find is a lot of softcore smut, and it gets a bit more explicit than it did last time. But we’re still not talking full-on sleaze or anything. As with the previous book, there’s more focus on heavy petting and “Let’s screw” dialog, before the author leaves the actual tomfoolery off-page. So we get to London, the stews talk excitedly of being here…then they go to a hotel and get caught up in their various soap opera subplots. Actually that implies there’s more meat to the subplots than actually exists. The characters on display are such ciphers, folks, that nothing much makes an impression – I’d forgotten how hard the New Stewardess books are to read, let alone to review.

So first up Captain Rick Andersen and stew Jennifer get busy, and if I recall part of the previous book’s subplot was that they’d been a couple years before, then Jennifer found out about Rick’s old wife and kid or somesuch, so ended it. That’s not really elaborated here. Instead it’s straight to the softcore smut, while at the same time in another room another stew named Laura finds out that a doctor she’s having a fling with has flown across the ocean to spend the night with her. “They shared their ultimate joy and fell asleep in each other’s arms,” it goes, again reminding one of the stuff in the previous book. But as mentioned, this one does get a bit more explicit at times: 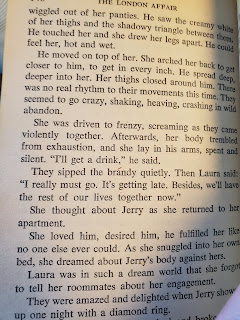 Here in London we meet John Carter (not the Martian one), head of World Wide Airlines, a portly 53 year-old who makes it a point to bang all the sexy stews in his employ. His assistant, James Gilbert, has a “pimp instinct” for such things and to this end scopes out hotstuff stew Cynthia. But Cynthia refuses to sleep with Carter, having sworn to back off on sex for the time being, given how outrageous her sex life was becoming. This plot initially appears to be going somewhere, but ultimately doesn’t. Instead two other stews, Sandy and Esther, discuss opening a fashion store in Manhattan when they get back home, calling it Cloud Nine and staffing it only with stews. Surprisingly, this subplot actually does pan out.

But before we even get to page 25 the stews have already left London. Next up they go to Montreal, which actually takes up more of the text than the London trip. Humorously, the author doesn’t seem to understand that people in Montreal speak French. However the crux of this particular storyline is that Jennifer, who is once again shacked up in a hotel room with Captain Rick, is arrested by a cop making a random “morals raid” and hauled off as a prostitute. Despite her protestations that she’s Rick’s girlfriend, the cops insist the hotel is frequented by whores and Jennifer and Rick aren’t married, thus she’s a hooker and she’s under arrest. A lawyer character is heavily built up and quickly dropped once he gets Jennifer freed from jail the next day.

Jennifer really can’t catch a break this time around. Next up she and Laura are working on a Miami-bound flight…and there are three hippie terrorists onboard, a girl and two guys. This is actually the situation hyped the most on the back cover and the first-page preview, but it too only lasts a few pages. And the hijacking attempt is ludicrous in today’s post-9/11 world; the hippie freaks have smuggled a knife onto the plane, one of ‘em whips it out, and they insist the plane fly to Cuba. The pilot has “no choice” but to comply. Oh, and even more ludicrous – a cop happens to be onboard, a new character brazenly introduced into the text and specifically stated as carrying a gun…and he doesn’t do anything!!

Instead everybody bides their time – perhaps indication of the author biding his/her own time as the pages pad out – and eventually they’re on the way to Miami, despite the storm front they’re flying into. We’re told the veteran pilot has handled all sorts of severe weather but this one’s a doozy and even he’s scared. The attempts at ratcheting up the tension are laughable because, as stated, there’s absolutely no characterization on display, just ciphers with names. Even worse, at this point the cop finally decides to do something and disarms the terrorist, and that’s it for the attempted hijacking.

And Jennifer, who as you’ll notice is the closest we get to a main character, still can’t catch a break – next she finds out she’s pregnant with Rick’s child. Her immediate response is to get an abortion, which her fellow stews encourage her to do, even though Rick is against it. After some deliberation Jennifer has it done (thankfully off-page), and afterwards she has the expected second thoughts about it. And Jennifer still can’t catch a break! Later on she’s propositioned by a passenger during a flight, one who naturally assumes she’s a whore, and Jennifer turns him down cold…only to be called into an executive office a few days later, where she’s informed the passenger has sent the airline a sworn statement that Jennifer propositioned him.

Even more ludicrous than the hijacking storyline, this one sees Jennifer being reprimanded, the airline taking the passenger’s side without any attempt to hear Jennifer or to believe her when she protests that the guy was the one making the indecent proposition. She’s put on unpaid leave, but some fellow stews band together in a strike. Finally the airline hires a former FBI agent to look into it, and he puts things right…and also gets a date with Jennifer, unsurprisingly. Oh, and as if paying off the karmic balance for Jennifer’s abortion, the author has stew Sandy delivering a passenger’s baby on one of her flights. Sandy you’ll recall becomes co-owner of Cloud Nine boutique in Manhattan, and the novel climaxes with its grand opening.

Only one more volume followed, The Diary, which appears to have received a scarce printing. Somehow I was able to get a copy for cheap so one of these days I’ll get around to reading the damn thing.
Posted by Joe Kenney at 6:30 AM