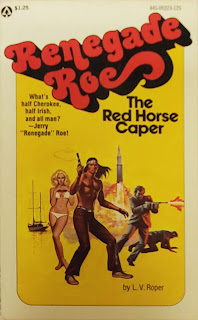 Here we have another mystery series that was packaged as men’s adventure by Popular Library, same as Hardy and Cage. Renegade Roe didn’t last as long as either of those; the first page lists a handful of “forthcoming books” in the series, but only one more volume was published: The Emerald Chicks Caper. Having read this first book, I can see why the series didn’t resonate with readers, but at the same time it’s still a lot better than Hardy, so it’s a mystery why it didn’t last longer.

The awesome cover art had me expecting the series Dakota promised to be – a kickass American Indian protagonist with fast-moving plots involving babes and bullets. But instead it’s along the same lines as those other two Popular Library series: a slow-moving mystery with very, very little in the way of violent action or steamy sex. I mean friends series hero Jerry “Renegade” Roe doesn’t even own a gun, so there goes the cool cover painting. There is however a blonde in a white bikini, but she barely even says hello to our hero.

Anyway the series is set in New Orleans, but there’s really not much effort to bring the city to life; it’s not like we’re talking A Confederacy Of Dunces or anything. Jerry Roe (I think the “Renegade” nickname is only mentioned once in the very beginning; Roper just refers to him as Roe) is a 35 year-old private eye of Cherokee descent. His background isn’t much elaborated; it seems that his grandmother or great-grandmother had a child with an Irish man or somesuch. Otherwise we get no info on Roe, whether he’s a vet, how he got into the private eye game, etc. He co-runs a P.I. agency with Stuart Worth, a married guy who is one year older than Roe but acts like a more mature, responsible adult in comparison and thus is the straight man of the duo.

Roe plays up on the “wild Indian” image with shoulder-length hair and his customary “Indian” attire, complete with deerskin moccasins and headband. Or, as Worth refers to his look: “a mod hippie with a pigmentation problem who can’t grow a beard.” There’s a lot of un-PC banter throughout, and it would appear L.V. Roper might’ve been a little inspired by the similar racist-baiting banter of Razoni & Jackson. Hell, within the first few pages Roe’s already doling out the hoary “White man speak with forked tongue” line. We also learn via Fran, the long-suffering young lady who serves as secretary for the two P.I.s, that Roe hopes to impregnate every white woman he meets, so that he can make “America a red race again.” Not that Fran has indulged; she makes it clear to her boss that she’s never had sex with Roe. Actually this whole conversation is hilarious in today’s era of #metoo and whatnot; Fran says she puts up with Roe’s constant advances because “he can’t help himself.”

With his new Mustang, crazy wardrobe, and brazen nature, Roe promises to be a much more, uh, “colorful” protagonist than he ultimately proves to be. Here are just a few of the “badass” things Renegade Roe does in the course of this novel:

Relentlessly hits on his partner’s wife; she politely puts up with the harassment

Relentlessly hits on his secretary; she politely puts up with the harassment

Gets abducted and tortured by thugs, who use pliers to rip off two of his fingernails; he’s rescued by his partner

Stands in clear view while spying on people with his binoculars

Gets abducted (again) and imprisoned on a boat, manages to free himself and jump in the water, then paddles there uselessly; he’s rescued by his partner

Goes on a date with the client’s secretary, hits on her relentlessly; she politely puts up with the harassment

Cracks the case by hiding in a closet all day

Rushes off to confront the main villain, once again without a gun, and is instantly captured; he’s rescued by his partner

This is another of those times where I honestly don’t know if the author intends this as parody or if he really has no idea that his “badass” character is actually a loser. Anyway as mentioned we don’t get any background on Jerry Roe and Stuart Worth…how they became partners, past cases they’ve handled, etc. We do learn that Roe has a bit of a name about New Orleans due to his brash actions and all the hot women he usually has at his side, but again, we don’t see anything of the sort in this volume. The two seem more content to drink beer in their office and have secretary Fran answer the phone. And Worth is the total straight man, constantly bitching about Roe’s wardrobe, how he’s late for work, how he drinks all the time, and all that jazz.

Roper is guilty of doling out every single “Indian cliché” he can in the course of the novel; Roe is constantly drinking and is mocked by other characters as being the stereotypical drunk Indian. And Roe for his part doesn’t help things, trotting out “paleface” rejoinders. It gets to be a bit much, particularly the humor about his drinking. Also Roe deals with his share of bigotry; their client in this book is a wealthy guy named Langden who demands that Roe not be allowed to work on the case because he doesn’t want to deal with a drunk savage. Of course Langden relents: his story goes that his business was retained by the government to develop experimental fuel for “the new piggy back space shuttle program.” The fuel is called “Red Horse,” and some of it’s been stolen.

Langden is certain his young new secretary, Lisa, stole the fuel, and now she’s missing. He can’t go to the Feds because his company will lose the Red Horse contract. So it’s up to Roe and Worth to find it. Our heroes tour Langden’s facility and Roe hits on his original secretary, an attractive 40-something named Ethyl who is filling in now that Lisa’s missing. Langden says that Lisa is involved with a shady entreprenneur named Lon Brandon (it’s so, so confusing to have characters named “Langden” and “Brandon”) and Langden’s betting Brandon is behind both her theft and her disappearance.

Sure enough, Roe runs into some thugs of Brandon’s, and after a meeting aboard the guy’s ship Roe agrees to drop the case in exchange for a few crates of Maker’s Mark and ten thousand dollars. This is because Roe has already found Lisa’s corpse, strangled by a lamp cord in her apartment. Later on Roe will be captured by more thugs; these ones only appear in this sequence and are led by a scar-faced sadist who has two of Roper’s fingernails ripped off by pliers. Worth shows up to save the day, toting a revolver, but his sole shot doesn’t hit anyone; the scene also serves to introduce Lt. Ken Marshall of the New Orleans police. He has a longstanding feud with the two detectives but agrees to give them 48 hours to solve the case before he steps in.

Roe’s sole action scene comes toward the end, when he’s again captured by Brandon’s men and taken aboard his ship. Escorted to a holding area by a massive “Negro,” Roe manages to hoodwink the guy and beats him up, making an escape. Otherwise he doesn’t do anything else; Worth does all the heavy lifting when it comes to guns and rescuing people. Before his capture Roe saw Ethyl, Langden’s original secretary, carrying a picnic basket off Langden’s ship. Sure enough, while hiding later in Ethyl’s closet, Roe will find some Red Horse cannisters – and also that they store “a horse of a different color,” aka heroin. The whole thing’s a convoluted heroin import scheme, and the whole “experimental fuel” bit is just padding. This is another of those books where the “climax” is composed of our heroes expositing for pages and pages about the villains’ motives.

Incredibly, Roper keeps the arrest of all the villains off-page, Worth and Roe having sicced Lt. Marshall and the Feds on them. Meanwhile the main villain has managed to escape, so as mentioned Roe rushes off to get him, having deduced where he’s hiding. This leads to another scene that’s heavier on dialog than action. Roper pulls this throughout; there’s a lot of stuff in the book that has no meaning other than to fill pages, and when it gets to the good stuff Roper breezes through it. For example, several pages are wasted on Roe bartering for the rental of a boat, hiring a young punk to sail him out to Langden’s ship one night. But after all this buildup, Roe ends up on the ship without any need of the kid’s boat, and later on tells the kid “thanks anyway.”

So as stated it’s not too surprising that only one more volume followed, but again there’s nothing here as lame as in the Hardy novels, which are even more misleadingly packaged, promising sex and violence when they’re really more about what Hardy eats and watches on TV. I’m not too familiar with Roper but other than the second Renegade Roe I have another paperback he did for Popular, Hookers Don’t Go To Heaven, which has a pseudo Donald Pleasance on the cover and promises all kinds of sordid sex. I’m going to imagine though that this is once again some creative license from whoever wrote the cover blurbs for Popular Library.
Posted by Joe Kenney at 6:30 AM

I'm starting to think one of these guys must've written the script for the Joe Don Baker movie, Mitchell. It seems to have the same approach...

Zwolf! You know I always look forward to getting a comment from you. I've of course only seen Mitchell via the MST3k treatment. I gotta say though -- that dude killed it in Charley Varrick. You ever seen that one? If not then I highly, highly recommend it. The novel it was based on sucks though...the movie was basically an original story based off elements in the novel.