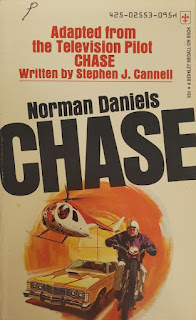 Chase was a cop show that lasted a single season, running from September of ’73 until spring of ’74. I never saw it, mostly due to the fact that I hadn’t been born yet. And I probably never would’ve even heard of it had it not been for this paperback novelization of the pilot episode, courtesy Norman Daniels, the author who gave us the Man From A.P.E. series and tons of other books, most of them paperback originals.

But I of course had heard of series creator Stephen J. Cannell; probably any guy around my age will remember his name, if anything due to The A-Team, which Cannell created about a decade later and memorably featured that goofy bit at the end of each episode with him yanking the latest hot page off his typewriter and tossing it. I remember in college in the ‘90s my friends and I had recurring jokes on what Cannell was typing and throwing away – this was back before cell phones and the internet was still dial-up (plus it was for geeks anyway), so it’s not like we had much else to do or talk about.

A little research shows that Cannell wrote this two-hour pilot, but then per network tradition the concept was altered before the actual series began – pretty much the same thing happened with The Six Million Dollar Man. It’s a wonder the show even got off the ground, because it has one of the most ridculous concepts I’ve ever encountered. Basically a police inspector in some unstated city wants to start a “secret” cop squad (gee, what could go wrong??), and when he can’t get the idea approved, he moves forward with it anyway…but it’s all so off-the-book that the squad members will have to cover operating costs out of their own pockets. And there are no promotions and no recognition. So this is like the one job that would be worse than being sent to Vietnam.

The novel opens with what will turn out to be the sole death in the novel; an undercover cop named Dan Freeman finally collars a thug he’s been chasing named Traynor, but Traynor gets the drop on Freeman and blows him away. He then stashes Freeman’s corpse and plants a gem on it, giving the implication that Freeman was dirty and on the take. This is the incident Inspector Dawson uses to make his “secret police force” a reality. Actually the concept wasn’t Dawson’s idea – it was Captain Chase Reddick’s, a “heavyset” cop “well into his 40s” (Daniels by the way seems to mean “stocky” by “heavyset,” as he uses the word a few times throughout). But Reddick had been drinking at the time and didn’t think Dawson would take him seriously.

So it’s all off the books and Reddick is to put together a top-secret team, one which will conveniently enough be called “Chase,” even though Reddick didn’t come up with the name and doesn’t like it(!?). Freeman himself was working on a secret case (one wonders what the hell is going on in this nameless city) and no one knows what it was, but due to the gem planted on him his widow and kids are being screwed out of his pension – as expected, the stupid city officials are more than willing to believe the cops are dirty. As expected, they also turn down Dawson’s “secret squad” idea in the opening, but their reactions are more sensible than Daniels intends to convey – I mean, a secret police squad, accountable to no one and totally off the books, could lead to nothing but trouble.

But to hell with sensibility! Reddick takes the job of leading the squad, even though he won’t get extra pay, the hours will be lousy, the danger will be high, and there will be no recognition for his deeds. Hell, there won’t even be any backup if he gets in too deep. It’s even more incredible that three younger cops join him, all of them “chosen by computer:” Fred Sing, a Chinese guy who is an expert biker (and it’s pretty cool that Daniels doesn’t constantly remind us Sing is Chinese, so the book’s kinda modern in that regard at least); Norm Hamilton, a pilot who flew tons of helicopter missions in ‘Nam; and finally Steve Baker, the top driver on the force.

I mean it’s ludicrous – we gotta find out why this undercover cop was killed, so we’re gonna need a motorcycle, a helicopter, and a fast car! Oh and we gotta pay for all of it ourselves. Anyway I digress. Baker has history with Reddick; hazy backstory has it that Baker and his partner were on the scene during a bank robbery or something, and Reddick barged in, causing the crooks to kill Baker’s partner. This backstory was kind of hard to get a handle on but the long and short of it is that Baker hates Reddick’s guts and instantly wants off the Chase squad. Oh, and that’s the other bullshit thing – you can’t quit!! Even though the squad doesn’t officially exist and all that jazz, if you’re assigned you’re assigned, and if you want out your only option is to quit the force.

Sing and Hamilton are all for joining, but Baker resents the transfer and spends the rest of the novel bitching about it and sending in transfer requests (which Dawson constantly denies). The Chase squad is set up out of an abandoned fire station, which reminded me of another cop novel I recently read: Killer At Large by Manning Lee Stokes, which also featured a new squad operating out of an abandoned fire station. The coincidence of this was too much; Stokes was likely writing Killer At Large when Chase was on the air, so I wonder if he ripped off the idea from this show. Well, I’ll just pretend like he did. I always enjoy these little synchronicities which have no meaning to anyone but me, but then that’s the very definition of a synchronicity – they only matter to the person who notices them, per Jung. (I’ve waited nine years to use “per Jung” in a review.)

I’m really digressing now. Reddick’s first order to the three men is to get some mangy clothes and grow their hair long – to look “disreputable and hippie.” Even Reddick goes for a long-haired grungy look, much to the ribbing of Inspector Dawson. Meanwhile Baker is tasked with souping up an ordinary-looking car and Sing is tasked with souping up a motorcycle. Hamilton meanwhile calls in on a favor an old friend offered him and gets a helicopter for a cheaper rental fee. Dawson even offers to pay for expenses out of his own pocket. It’s all very, very hard to believe, particularly given that the “disreputable hippie” look serves no purpose other than occasional jokes.

A glaring problem with the book is that too much of it is comrpised of exposition, usually informing us of stuff we just saw happen. But its even worse in the action scenes. The first one sees Baker and Sing chasing a suspect in their souped-up car and motorcycle, Hamilton following from above in his helicopter, and the entire scene is relayed through dialog. Reddick, in a regular car and unable to keep up with the others, must listen on his radio as Hamilton reports on everything as it happens, as if he were a sports announcer calling plays. As for the straight-up expository stuff, as mentioned it’s usually Reddick meeting up with Dawson and going over the current status of the case. Material we readers already know. Clearly this is Daniels’s attempt at filling out the pages, but man, the book’s a mere 160 pages of fairly big print. He could’ve expanded on Cannell’s script and added more fireworks.

Because it’s clear that Cannell’s pilot suffered from the constraints of a TV budget. A concept like this needs to be wildly over the top; Chase and team should almost be like a commando squad, with constant firefights and chases on the ground and in the sky. But as it is, there’s absolutely no need for a motorcyle, a helicopter, or a souped-up car when you’re researching a homicide, and Cannell tries as hard as he can to make it work, as does Daniels. Who actually has a tougher job of it, because he can’t rely on visuals and a soundtrack to keep his readers from noticing all the problems with the concept and story.

Another thing missing, as expected, is any adult stuff; the sole female character in the novel is a lady named Barbara who was supplying Freeman with info. It’s intimated that Barbara was a hooker, but this being the novelization of a 1970s TV movie, it’s not very clear. She turns out to have more up her sleeve, though, working with Traynor, the thug who killed Freeman in the opening pages. These two characters are plotting to screw over wealthy criminal Quentin Mackenzie; Reddick discovers, through hard-to-believe means, that Freeman was very interested in an upcoming motorcyle race that starts in Tijuana and goes across the border into the US. At length we’ll learn Traynor is competing in this race and will be hiding diamonds or heroin in his bike, moving the stuff for Mackenzie, but secretly planning to make off with it on his own.

Finally the concept is worked into the plot, sort of; Sing heads to Mexico and tries to get in the race, having to break into the sign-up office to do so. This gets him arrested and into the orbit of Lt. Salizar, an old colleauge of Reddick’s. Now working with the Mexican police the Chase squad attempts to bring down Traynor and Mackenzie, with the highlight of the novel being the race. However again it’s mostly relayed via dialog. The other big action scene has Reddick and Hamilton chasing after Mackenzie as he tries to escape in a plane. No bullets are fired, though – in fact the heroes never fire a single gun in the book, which I guess is nice so far as keeping down the costs goes, but kinda sucks if you’re an action-starved reader looking for a cheap thrill.

The book ends with a “Special Note to Readers” which informs that the series itself will see Reddick in more of a behind the scenes capacity, with some new guy out in the field with Sing, Hamilton, and Baker. Plus there’s gonna be a dog. So the show was experiencing the usual post-pilot network retooling; it’s my understanding that further retooling occurred late in the season, with Sing, Hamilton, and Baker removed from the series entirely and replaced with three new guys. Not sure if this is indication that the show was doing poorly and the recasting was an act of desperation, but as for Chase the novelization, it seems to have fared pretty well, garnering two editions.
Posted by Joe Kenney at 6:30 AM

CHASE was a dreadful show. I haven't seen the pilot, but I assure you that, during the series, the cops in no way look “disreputable and hippie.” In fact, part of the show's problem is that the cops all look alike (except "the Chinese guy") and have no personalities, so you can't even tell them apart. Indeed, there was a cast turnover late in the game, but when your desperate move to save a show is to bring in Gary Crosby, you may as well just hang it up.