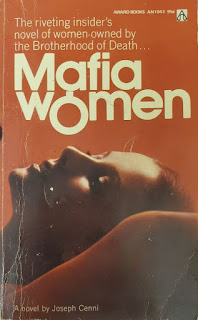 Mama always told me about those Mafia women. Actually she didn’t, but that just sounds like the great country music hit that never was, doesn’t it? Anyway I used to always wonder what this ultra-scarce Award PBO was about, assuming it was just a sleazy cash-in on The Godfather. Turns out that it’s more of a study of various Mafia-world women, with more literary aspirations than sleazy ones. In fact it’s a wonder it wasn’t published by Pocket or Dell or Bantam or the like, as it’s more along the lines of those imprints than something from the publisher of Nick Carter: Killmaster.

Per the Catalog of Copyright Entries “Joseph Cenni” was the pseudonym of an author named Miles Donis. According to the pre-failing New York Times, Donis was a “novelist, screenwriter and former advertising director for Columbia Picutres.” Per this obituary, he died at the young age of 43 in 1979, the pedestrian victim of a car wreck. The article cites only three novels for Donis, so obviously his authorship of this pseudonymous novel wasn’t known at the time. But then it would appear he was a relatively obscure novelist, and of course now has only become more so.

The novel centers around several women who were either born or married into the Mafia, and the various trials and tribulations they’ve gone through as a result. There is no crime novel stuff per se, even though the novel opens with 50-something godfather Joe Banno being assassinated. The news of this is relayed to his wife, now widow, Lorraine, who acts as martriarch of this New York-area family. Donis uses this development as a frame to hang the novel around; Loraine will think of this or that Mafia woman who comes to visit her and help prepare for the funeral, and then each chapter will focus on this new woman and her past and all that. I was surprised though that Donis didn’t elaborate much on Banno’s assassination; we learn he was shot dead in a car, a young woman also murdered with him, but this plot thread isn’t resolved.

Instead we hopschotch from one Mafia woman story to another, so that the novel has more the vibe of a collection of short stories. Lorraine’s story is first and it’s fairly bland. She’s become godmother of this family through nothing more than just being the wife of Joe Banno. There’s no lust for power on her part and really not much of interest happening. She gets married, she’s a happy housewife, she’s the godmother of the Banno family, and now she’s in her fifties and her husband’s brains have been blown out by a rival family.

Linking the various flashbacks is this framework story, in which Donis introduces the concept that these Mafia women are basicaly kept women, with no ability to make any decisions on their own other than keeping the home and raising the kids. Donis will proceed to beat this story to death over the course of the short book. Even her husband’s funeral is something that is taken care of for Lorraine, so that she just sits in the house as other women come visit her, the family consigliere keeping her up to date on the funeral and ensuring guys are there for security. As each new woman comes to pay her respects Lorraine will consider her for a moment, and then the next chapter will be devoted to this new woman.

So after Lorraine we have Angela, the “most beautiful of them all,” and also at 25 the youngest. Her story takes us back to two years before, when she moved to New York from a small town and became involved with a young torpedo named Sal. After setting Angela up with a job at a club, Sal was arrested and sent to prison, and soon Angela was being propositioned by Frankie Gatto, owner of the club and a bigwig in the Banno family. When he has a limousine around to bring her to his place that night for some sex, Angela bluntly turns him down, for which she’s given increasingly-expensive presents, and ultimately a marriage proposal. But even after marriage Frankie won’t have sex with her, wanting just a blowjob, so Angela begins a secret relationship with Johnny, groomed as Frankie’s replacement. The reader can see where this is going a mile away, and by chapter’s end Angela is back to her “cage” aka expensive home, there solely to provide the oral needs of Frankie Gatto.

Joan’s story, up next, is sort of similar. This one takes us back to the mid 1950s, and Joan falls in love with dashing Vince, who heads up various rackets for the Banno family. But it becomes increasingly obvious that Vince gets his jollies by slapping Joan around. This starts with random slaps to the head and proceeds to full-on whippings, with Vince so excited that he has sex with her immediately after the beatings, then walks away afterward and refuses to discuss it. As mentioned though Donis never goes for outright sleaze, writing even the sex scenes in a pseudo-literary style. There’s a darkly humorous part where Joan is mistakenly informed that Frankie’s been killed by a rival family. This chapter caps off with Joan trying, as Angela did in her story, to escape, but is caught and dragged home. For this she is so beaten she ends up in the hospital, but Frankie lies to the doctors that she fell down the stairs, and the guy’s so friendly and cordial who could doubt his story?

Cynthia’s story follows this theme of being unable to escape the Mafia. Her husband’s in prison for tax evasion, so Cynthia, still attractive and young, starts openly hitting on young torpedos in the family. Her friends and the consiglierie intervene each time, so Cynthia resorts to booze. Soon she’s a roaring drunk, so the family stages an intervention, and she’s sent to an upstate rehab spa. Here she encounters a handsome young doctor, and soon they’re engaged in some hot pseudo-literary lovin’. At least Cynthia’s paramour escapes death; she returns home “cured” of booze, her love affair still a secret, with the promise that the family will send her back up there every couple months to ensure she stays cured.

Up next is Theresa, another pretty and young one, whose husband Rickie is an up-and-comer in the Banno mob, but who refuses to get his hands dirty in the “old way.” In other words he’s one of those executive types who were changing the face of the Mafia at the time, away from the “Moustache Petes” of the 1930s. Theresa is similar to Lorraine in that she’s content to just be a happy housewife, but she does become hooked on their ever-more-exorbitant lifestyle, thanks to the pay Rickie is getting for his jobs. But when Rickie pulls a hit because it’s path to an even bigger promotion, she calls him a “Murderer” that night and closes herself off to him. This story seemed pretty half-baked, not helped by the fact that it offers no resolution.

The last Mafia woman is Dorothy, in what is by far the goofiest chapter. The only one who isn’t Italian, Dorothy is a heavyset mother of three who reads magazines and likes to think she’s more intelligent than she really is. Thus she’s incensed by how the Mafia are presented in TV and movies like ‘30s gangsters. So Dorothy calls up the paper and gives an interview as the “wife of a prominent mafioso,” for which her husband is properly pissed off. He’s instructed by the consiglieri to beat her, but he can’t. Next Dorothy decides all the gals need to go on a popular afternoon talk show hosted by David Erskine. She talks all the other women save for Lorraine into it, but when she arrives at the studio the next day, none of the others are there. When she calls them she learns all of them are “sick,” ie clearly prevented from appearing by their more-domineering husbands, so Dorothy runs from the show.

And that’s it for Mafia Women; we close with Lorraine in the limo to her husband’s funeral, reflecting how it’s the woman’s place to bury the man. As mentioned there’s no followup to who killed her husband, who the mysterious woman was that was also killed in the car with him, or any of that jazz. The focus is really more on telling the same story over and over again – you marry into the Mafia, you say goodbye to your freedom. But then pretty much the same could be said for any marriage, Mafia or not.
Posted by Joe Kenney at 6:30 AM