Room At The Bottom (Jeff Tyler #2) 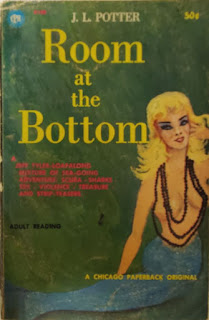 Room At The Bottom, by J.L. Potter
No month stated, 1962  Chicago Paperback House

In a parallel to Ennis Willie’s Sand, Jeff Tyler was a hardboiled pulp series that was published by a sleaze imprint that grossly overhyped the exploitative elements. Unlike Sand, this series, which I think ran for three volumes, hasn’t gotten its due; I could hardly find anything about it online. I don’t even remember how I came across this volume.

Jeff Tyler, who narrates the books, is a WWII vet (a frogman in the Pacific action) who now operates the Loafalong, a reconditioned sea-air craft that’s over 80 feet long. He makes his living as a salvage consultant and his home base is New Orleans. Writing wise the series comes off like Mike Hammer guest-starring in a Travis McGee novel. Mickey Spillane is a bigger influence on the series than John D. MacDonald (not to mention that the McGee books hadn’t even started yet), with Tyler a hard-hitting, two-fisted ladies man who answers to no one but himself.

First a note of confusion. I can only find three books in the series. This one, which is numbered “A103” by the publisher; Or Murder For Free, which is numbered “A104,” and Kill Sweet Charity Kill, which is numbered “A109.” All three are from 1962. The numbering would imply that this one, Room At The Bottom, is first in the series. However, the back cover says it’s “the latest saga” about Tyler, and further, the back cover copy of Or Murder For Free seems to introduce Tyler. Thus I’ve concluded that Or Murder For Free must be first in the continuity, followed by this one, with Kill Sweet Charity Kill being the last volume; I can’t find any others listed, but it looks like Potter did a non-Tyler novel for Chicago as well, Jambalaya Loverman, published in 1961.

Anyway, this is a very hardboiled novel, as evidenced in the very beginning. Tyler when we meet him is in a deep diving suit, salvaging an old wreck outside New Orleans. Later we’ll learn the boat sank “15 years ago,” specifically 1942, when it was on a New Orleans-Liverpool run for WWII. Curiously this would set the action of Room At The Bottom in 1957, but then there are no topical details in the book to speak of, and at any rate the ‘50s setting just gives the novel even more of a hardboiled vibe.

Tyler’s air is running low, and then he’s trapped by a steel beam in the collapsing ship. He talks to his tender, “the kid,” up on the boat way above. (Later we’ll learn the kid is named Jimmy, but we don’t get much detail about him.) Tyler tells the kid his oxygen will be gone very soon and to call the Navy, etc. All very calm. Then the kid comes back on and says the closest Navy guy is 5 hours away and there’s no help anywhere else.

Here’s how Tyler responds to this veritable death sentence: “Looks like supper’s a long way off.” That’s how hardboiled the novel is. Tyler has similar toughguy quips and retorts throughout the novel, which really gives the impression of Mike Hammer.

This opening sequence was my favorite part of the novel. Jimmy the kid, against Tyler’s stern admonishings, gets on his scuba gear and comes to the rescue. But he quickly runs out of air, so now a freed Tyler has to get both himself and the kid back to the surface, and they’re now both out of air.

It’s all very tense and conveyed with none of the overwrought atmosphere you’d get today. Tyler is a professional and drowning is just one of the potential hazards of the job. He of course manages to get them to safety, after which he berates the kid for refusing orders to stay topside – and then thanks him for saving his life. Meanwhile Tyler has even more problems: he was hired to get a couple hundred thousand dollars from the safe of the sunken ship. But the safe was empty, save for the log book. Tyler suspects someone else has been down there in the past 15 years, or else Tyler’s been set up.

He figures it’s the latter when he visits the office of Laird’s Casualty and Marine Insurance, the outfit that hired him for the job. Goldbaum (or “Goldpop,” as Tyler refers to him, saying that Goldbam doesn’t make that big of a noise in his book – admittedly, one of Tyler’s lamer smart-ass lines) flat-out accuses Tyler of taking the money himself, hiding it on the ocean floor, and planning to collect it at a later date.

The majority of the narrative features Tyler going around New Orleans seeking out the survivors of the crash, all those years ago. In this regard the novel works like a private eye yarn, and the Loafalong stuff doesn’t return until the end of the tale. I forgot to mention, Tyler has a crew that follows him around, but they don’t take much part in this particular adventure: in addition to Jimmy, there’s Jack Price, the “red-headed first mate,” deckhand Stuke a “brawny Polack,” and also a cook whose name I’ve forgotten, who is sort of cowardly when it comes to the guns and action and stuff.

The cover overhypes the sleaze quotient by a country mile. Tyler gets laid a lot but Potter keeps it all off-page. Even the customary exploitation of the female characters and their ample charms is minimal…even more minimal than the average pulp publication of 1962. Kind of makes you wonder why J.L. Potter even published with Chicago House in the first place; with a more reputable publisher and better distribution it’s possible Jeff Tyler might’ve been more successful, or at least better remembered.

Tyler’s first score is the sexy roommate of a woman who is married to one of those shipwreck survivors; Tyler heads over to their apartment to interview the latter, finds she’s at work (dancing at a strip club), and ends up getting cozy with this lady; her name is Daisy and she too is a stripper, but also a fortune teller and other odd jobs to pay the bills. Later Tyler will score with the other roommate, who’s husband is in prison.

It’s certainly not an action-packed novel. Tyler sort of drives around New Orleans and gets in conversations with various shipwreck survivors. The first, the old captain of the ship, proves to be the most fruitful, at least so far as Tyler’s love life is concerned; he takes an instant shine to the man’s sexy young daughter Ellen. You know she’s going to be the main female character because Tyler doesn’t immediately have sex with her. Instead they go on a couple romantic dinners and Ellen constantly begs off before the dirty deed can be done.

But par for the course in hardboiled pulp, Tyler runs afoul of various thugs. At one point he’s accosted in his trailer home (which impresses the ladies!) by a duo of torpedos, who punch him around a little bit; he later manages to get some payback with help from Ellen. Here the plot gets all twisty because the dude who pays the thugs is named “Goldbaum,” same as the name of Tyler’s boss at the insurance company, and gradually we’ll learn this is the stepson of that older Goldbaum…and also was a passenger on that wrecked ship. There’s also a little lurid stuff late in the game, when Tyler comes back to his trailer home and finds the strangled, nude body of one of the women waiting for him. Another attempt at a setup courtesy the villains.

Tyler carries a .38 but uses it sparingly, most memorably during a nighttime chase featuring those two torpedos from the earlier scene. Throughout he doles toughguy smartass quips that would have Mike Hammer red with envy. Oh and I forgot to mention that Tyler is sort of famous now in New Orleans due to events that happened in the previous novel (I assume), which I guess took him to Nicaragua. Anyway his crazy escapades there are the source of much conversation, and he even bothers to tell others what happened to what I presume was that volume’s leading lady (they’re taking a break or somesuch), so there was definitely a bit of continuity in the series.

The climax takes us back to where we started, with Tyler and crew (this time with two of the female characters in tow) heading back out to the wreckage site. Here Tyler and Ellen finally consumate their budding romance, but as ever it’s totally off-page. This features a humorous cap-off in which the girl tells the guy this was just a one-time thing! She’s engaged and just wanted to sow her wild oats with Tyler, who comes off as so dashing and handsome and whatnot.

The underwater sequence isn’t as gripping as the one at the opening, but that being said this time Tyler’s attacked by a scuba diver at the wreckage site. Here he finds out what’s been going on (basically, a rotten deal between the two Goldbaums back in 1942) and turns the tables on his enemies (planting an explosive on the underside of their ship). After which Tyler gets his name cleared and is free for more adventures – of which as mentioned there was at least one more.

I wasn’t blown away by Room At The Bottom but I suspect if I’d read it during my hardboiled kick a couple years ago I might’ve enjoyed it a lot more. J.L. Potter (I believe his first name was also “Jeff”) is no Ennis Willie, and Jeff Tyler’s no Sand, but I do like the sea adventure vibe of the series, so maybe someday I’ll seek out the other volumes.
Posted by Joe Kenney at 6:30 AM

Oscar Sail, Tony Rome, among others lived on boats long before Travis McGee.

According to Al Hubin's Bibliography of Crime Fiction, Jambalaya Loverman was also a Jeff Tyler novel. He may be wrong about this, but I thought you'd like to know, in case you'd like to track it down.

Thanks for the comments! And Steve thanks for the note on Hubin's. I clearly misread Potter's first name, which is mentioned by the editor on the back cover of one of the volumes I don't have (I saw a scan of it online). I forgot to mention in my review, but each volume has a "note from the editor" on the back cover, featuring almost nonsensical writing.