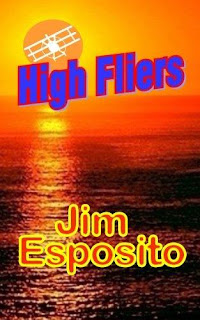 Mining similar territory as the earlier Night Crossing, High Fliers is a smuggling adventure comedy self-published by a guy who used to write for Creem and who, per his site, was once referred to by Grace Slick as “the weirdest person” she ever met. If that isn’t high praise I don’t know what is. I discovered this one during a random Google search for dope-centric novels set in the ‘70s(!), and I have to say I enjoyed it, other than for a few questionable parts.

The novel seems to be set in 1973, or at least no earlier than that – dates are mostly divined by the rock albums that are mentioned, and the latest one appears to be Lynrd Skynrd’s first, which was released in ’73. And Esposito does sort of capture the spirit of the era, with copious grass being smoked and coke being inhaled, though sadly there’s a bit more of the latter than the former; High Fliers is more of a coke novel than a dope novel, as our intrepid anti-heroes, The Ace and The Kid, seem to inhale a few tons of it. Kid’s recurring line of “Toot! Toot!”, asking the Ace for a snort, appears almost every other page, and while initially it’s funny it becomes tiresome.

But then this same criticism ultimately can be levelled at the novel itself, as its comedic, madcap tone eventually wears thin and you wish for a bit more meat to the tale, more depth to the characters. In this regard I suspect it’s probably better enjoyed in short doses, so to speak, and Esposito seems to have written it with that intention in mind, as each chapter is an “Episode,” sometimes starting off with a recap of the material we just read in the previous chapter. So maybe an “Episode” a week or such might yield a more rewarding read than tackling it all over a few days, which is what I did.

Anyway the action takes place near Gainesville, Florida, and it’s sometime in the early to mid 1970s. The Ace and The Kid are former ‘Nam pilots who now make their living flying grass and coke across the border for a dealer named Wheeler. (“Wheeler-dealer,” I just got that…) Esposito has a habit of rarely describing his characters; about the most we get is that the Ace wears his “old Vietnam flight jacket.” But otherwise what these two look like must be determined by the reader’s own imagination. This was a curious decision on the author’s part, but also it’s an indication of the fable-like vibe of the novel, as we not only don’t get descriptions but we seldom if ever get a look into the Ace or the Kid’s thoughts.

There is a surreal vibe to the tale; again, it’s more of a comedy than a straight novel, and thus we have our heroes attacked in the Florida skies by a white Fokker D Triplane. This mysterious pilot, The Winged Crusader, has been shooting down drug-smuggling planes for the past few months, and Ace and Kid are his latest prey. They crash their Lockheed Lodestar (dubbed “The Flying Joint”), but there’s no tension or danger. Indeed they pull themselves out of the muck and run right into a sexy blonde – at least I assume so, as Esposito doesn’t describe her much, either. And the biggest indication that High Fliers was written in the tepid modern era and not actually in the free-wheeling ‘70s is that there’s zero exploitation fo the female characters; about the most we get is that this blonde, Dawn, wears her skimpy clothing “well.”

Despite having these two interesting lead characters, even though they’re ciphers and all, Esposito has this curious insistence upon filling up a goodly portion of the book with irritating, overlong sequences about the Fokker-flying pilot who shot them down. His name is Buck Jr. and he’s the son of a famous Christian minister. We get tons and tons of Christian bashing in the book, which is fine, I mean I know that’s a safe space for left-leaning authors (to complete the mandatory requirements, Esposito also mocks cops and makes the Feds look like imbeciles), but it does go on and on. And to make it worse, it’s annoying and seems to come from a different novel.

But then, there are huge tracts of High Fliers that abruptly switch over to Christian-bashing nonsense…most egregious being a part midway through where Buck Jr. is stranded in a small Florida town and we get this overlong dialog sequence where some hustler tries to get the local preacher to join a consortium of corporate-style churches or somesuch. I mean by this point we get it, you know? But beyond that it’s just a random and ultimately pointless flogging of an already-dead horse, and I say again it’s as if Esposito had two unrelated manuscripts, one a dope-smuggling adventure and the other a spoof of Christian ministries, and merged them into a single disjointed novel.

And all of it’s really strange because, minus this stuff, the novel is fun and does capture the vibe of the ‘70s, at least in so far as everyone’s either smoking grass or tooting coke while blasting the latest rock album. In that regard most mention is made of JJ Cale, but our heroes are also fans of Who’s Next. Deep Purple’s Machine Head is passed off as “too heavy,” and that friggin’ Lynrd Skynrd gets played a lot as well, while Ace and Kid hang out with Dawn near Gainesville – and, true to the madcap vibe of the novel, Dawn has a twin sister named Eve, so there’s a blonde for both our heroes.

But none of these characters are given even a modicum of personality. There are a lot of missed opportunities in High Fliers, and the fact that I even noticed this should be testament enough to the fact that the novel is so enjoyable that you ultimately expect more from it. I mean if it was pure shit, who’d care, but Espisito has delivered a fun concept, and he writes with a flair you’d expect from a veteran rock reporter. But then, he also spends way too much time with Buck Jr., at the expense of the infinitely more interesting Ace and Kid.

And Buck Jr. gets a lot of narrative time. He lives in opulence in the so-called Promised Land, ie the paradisiacal grounds owned by his famous minister of a father. Each section in the opening chapters is the same; Buck wakes to a beautiful day and waits for God to speak to him. And when he gets the divine word, Buck presses a button and descends into a Batcave-like lair in which his all-white Fokker Triplane waits for him. Buck dons his all-white pilot getup and becomes the Winged Crusader, and goes out to gun down dope-smuggling planes. It doesn’t take long for us to learn that Buck is dosed on a daily basis with acid and “God” is actually his DEA handlers, who use him to achieve their own ends.

Speaking of which, Esposito also features a crew of bumbling federal agents; there’s Michael d’Angelo, the chief of the district, and his underling Rickenbacker. These two are easily confused and they each take turns being the main villain. There are also lesser DEA agents, given jokey names (ie MacDonald & Douglas, etc), but they are all complete fools, ten steps behind their prey and incapable of doing anything right. They even goof up with Buck Jr., the guy in charge of him too busy playing chess with a vintage computer and not paying attention to Buck’s progress through his underground lair; ultimately this leads to Buck crashing, midway through the book, and ending up in an overlong subplot which sees him running a preachathon to drum up money to repair a local church(!?).

If you stick with the book mainly for the Ace and Kid material, it’s not bad, and does get better. Eventually we get to the main plot, such as it is – Wheeler wants the duo to fly over an incredible amount of coke from Mexico. Like a couple hundred pounds of it. There are some oddball comic touches here, like how Wheeler has a tanker filled with coke, and copious amounts of grass, but complains about the overhead and all the competition and etc, etc. Our heroes need a new plane, though, and end up coming upon a fully-armed B-25 bomber; here Esposito takes the opportunity to bash older conservative types, as the lady selling the plane claims it was owned by her WWII vet of a husband, and she’s so batty she doesn’t get it that Ace and Kid want to use the plane to haul drugs.

I forgot to mention – in one of the most head-scratching misses ever, we learn early on, in a clever bit of backstory, that Buck Jr. was actually Ace and Kid’s captain on a bomber in ‘Nam. But get this: Esposito does absolutely nothing with it. This reveal is so cleverly done that it promises something more, and I kept reading and reading, enduring all the irritating Buck Jr. sections, expecting for a big reunion between the trio – Ace and Kid introduced Buck Jr. to LSD, you see, dosing him during a bombing run – but it never happened. Instead about all we get is a jokey finale in which Ace and Kid, no longer in the smuggling biz, are offered a job flying for Buck Jr.’s new preaching-and-planes venture, but they never even meet him.

Action is sparse, because it isn’t really that sort of novel – upon getting their B-25 Kid and Ace get in a brief aerial skirmish with the Winged Avenger, but other than that we have a couple rip-offs, in which a mysterious group of masked men ambush our heroes. But really it’s all done more in a comedic vein. Speaking of which our heroes do have some goofy, memorable traits, like the “emergency joint” Kid always has hidden behind his ear, or the duo’s insistence upon always playing some classic rock tape or LP. So Esposito really does capture the ‘70s vibe, with the holy trinity of sex, drugs, and rock and roll, though to be sure the first one, ie the sex, occurs 100% off-page.

So really I’m on the fence. I appreciate Esposito’s attempt at capturing a story set “back in the day,” and his Creem background brings something special to the book, but I kind of expected more from High Fliers, mostly because it promised more than it delivered. Perhaps its greatest failing is that it wasn’t written and published in the ‘70s; maybe then it might’ve become a cult classic of sorts. But it was a fun way to pass the time at least, with the caveat that the arbitrary religion-bashing stuff just got old after a while, mostly because it had nothing to do with the story I wanted to read – namely, a fun adventure about “high flying” drug smugglers.
Posted by Joe Kenney at 6:30 AM

Not about your review, but hope you don't mind me saying I really like your updated photo - the little guy is so big (as opposed to shrinking, I guess?)!

Thanks for the comment, Guy! I really appreciate it. And yeah, he's definitely growing...kid's 19 months old and he towers over 3 year olds. Maybe it was all those super-vitamins my wife was taking...!

Sorry I don't comment more...not really my thing, but I've enjoyed your blog for some time.
If you've wondered about my name/avatar, watch 'For A Few Dollars More'. ;)