Yolanda: The Girl From Erosphere (Yolanda #1) 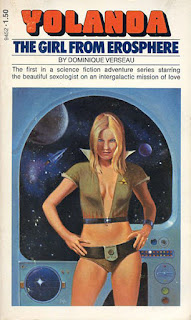 This is one of those books I’ve wanted to read for a long time, but it was always exorbitantly priced. But, in one of those random flukes, I recently came across it at a jawdroppingly low price – pretty much the exact same thing that happened, years back, with another book I hunted for: Jackboot Girls. Anyway, enough preamble – Yolanda: The Girl From Erosphere is an English translation of a French sci-fi sleaze novel from 1972. “Dominique Verseau” was in reality prolific pulp writer Henri Rene Guieu.

A curious thing about this book is that it is packaged identically to a Dell paperback of the day, even down to the blue tippings on the pages. Was Grove Press a subline of Dell? I don’t think it was, but Yolanda looks just like a Dell book. Another curious thing is that no info is presented about the French provenance of this novel, when it was originally published, who Dominique Versea was, etc. About the only thing we get is a blurb on the very last page that another Yolanda novel, The Slaves Of Space, would be forthcoming from Grove. It came out in 1976, and that one is so astronomically priced on the used books marketplace that it’s not even worth thinking about tracking down.

Not that this is something to lose sleep over, as if it’s anything like this first volume, I can already guess what the contents will be – endless hardcore screwing, with occasional references to French poets, Classical literature, or philosophy. I was hoping for a Barbarella-esque softcore space yarn, but instead The Girl From Erosphere is pretty much all about the sex. In this regard it’s similar to another sci-fi sleaze yarn of the day, The Moonlovers. Like that novel, this one also has a humorous tone about it; not an outright parody or satire, but just a lighthearted romp about an oversexed four-person crew on the first voyage into hyperspace.

It’s the sexually-liberated future of 2107, and our heroine is Yolanda Hammerlove, a gorgeous, phenomenally-built blonde who works as a “sexologist.” In reality Yolanda mostly just sexually-bullies people throughout the novel. We only get vague setup about this future world, mostly that men and women now hardly wear anything, just “jerkins” or “minishorts.” Instead it’s really just all about sex, usually shoehorned into the narrative; like in the opening, in which Yolanda, on board a jet that’s taking her to Washington, reflects on her recent lez experience with a 16 year-old German girl, celebtrating her SF day (aka “Sexual Freedom”).

The sex scenes in this novel make those in The Baroness seem restrained in comparison. They are more along the lines of the sleaze in The llusionist, though not to the same gross-out levels, however it must be stated that some of the descriptions are so thorough that they do reach off-putting levels. At least in The Baroness Donald “Paul Kenyon” Moffitt knew when to say when. Not so with Guieu, who goes to explicit levels that are not for the squeamish. As ever with ultra-hardcore sleaze, this only serves to make sex more repugnant than arousing.

Yolanda encounters test pilot Bob Rowland on the flight, and promptly they make plans to screw. This will serve to be one of the recurring jokes in the novel, as it takes forever for them to accomplish this, even though they think they have, multiple times over. Turns out they’ve both been called to the Pentagon, now a large black “monolith.” There General Murdock of the Spece Security Committee tasks them with taking the experimental ship Torgar, the first capable of hyperspeed, and heading for the Capella sun, in the Charioteer constellation, 42 light years away. Along for the ride will be Ted Cunningham, astrophysicist and co-pilot, and Jany Jankins, psychologist.

The mission is top secret and the four can tell Murdock has something up his sleeve. But regardless they get right around to sexually-harrassing one another; Jany in particular, she of the beautiful face, awesome body, and “flaming red forest” of pubic hair, is taken through the wringer throughout. The author is not concerned with sci-fi realism, per se; despite entering hyperspeed, and thus exiting the time-space continnuum, the crew is able to keep in touch with Murdock via a viewscreen, making periodic check-in calls to Mission Control.

The focus is instead on hardcore shenanigans. Soon enough Yolanda is bullying Jany into some lesbian action, our heroine taking umbrage at the redhead’s “prudish” demeanor. Apparently being a “sexologist” (and Yolanda even has a doctorate in it) means harrassing and bullying people over any conservative thoughts they might have about sex, and then forcing them to do the deed. It goes on like this for pages, documented in ultra-thorough detail. It gets even more outrageous in an interminable sequence which has Bob and Ted banging Yolanda and Jany, respecitively.

Only it turns out it wasn’t them – thick pubic hair is a recurring motif in the novel, often mentioned, save for the thin blonde “fringe” of Yolanda’s nether regions. Yet the women Bob and Ted screw all night are bare “down there,” and the men Yolanda and Jany have sex with – and they too think it is Bob and Ted, respectively – have massive wongs. All this occurs with the lights off, hence the confusion. Anyway when everyone’s nude on the deck of the ship next day, the guys can’t help but noticing those bushes and the gals can’t help but noticing how much smaller the guys are – Yolanda even speculates that Bob and Ted might’ve screwed ‘em with dildoes.

Gradually – plot development takes a leisurely backseat to hardcore sex – we will learn that Bob and Ted actually screwed an alien woman last night, one who came to Bob’s room and then went to Ted’s. Her name is Iyrinndoa and she’s a seven foot tall bald chick with big boobs. The women actually screwed a male bald alien of the same hieght named Kaloon Ghour. They are from the very planet our heroes are headed for, and teleported aboard to “test” the crew sexually. This leads to more screwing, Jany once again getting the most of it, probed and banged by all and sundry. Oh, and Yolanda busts out a host of sex gadgets from her attache case. It’s all kind of gross.

It gets grosser in the cliffhanger finale, which has the crew and their two alien friends captured by the Rigelians, known as the “sexually insatiable ones.” As tall as the other aliens but hairy (and memorably described as smelling “gamy”), the Rigelians immediately go to town on our heroes, screwing them endlessly – we’re informed Bob and Ted are abused by Rigelian women and men. And Jany gets the worst of it again. Even Yolanda is worn out after the “two hour orgy.” The novel ends with them all in prison on the Rigelian ship, wondering how they will ever get free – and here is where we leave them. And will leave them; as mentioned the sequel is atrociously overpriced, but to tell the truth I wouldn’t want to read it anyway.

This is another of those novels that is best described via quotes, most of which I’ve chosen at random:

Now it was their companions’ turns to emit muffled screams. For the penises of both men emerged out of thick forests of dark-brown pubic hair! -- pg. 88

Before either man could respond, Yolanda reached over and gently palpated both of their sexes. “The only rational explanation I can think of,” she continued, “is that you two came to us equipped with dildoes.” -- pg. 98

“Do you like being sodomized?” Now it was Bob’s turn to look astounded.

Yolanda tossed her golden mane over her shoulders. “Doesn’t every woman, from time to time? What’s more, I’ve found that most men enjoy it also.” -- pg. 120

Ever the gentleman, Ted seized the end of the artificial member which still protruded from between Jany’s creamy buttocks and withdrew it – although not completely. -- pg. 126
Posted by Joe Kenney at 6:30 AM

French writers are the best in dirty fiction.

I know you didn't recommend it, but after those quotes I unfortunately had to.

I have this book and the follow up "Slaves of Space." A third (untitled) adventure is promised on the last page of "Slaves of Space", but I can find no evidence that any others were ever published. "Slaves of Space" is better than the first, but this is not saying much. They do go for quite a bit of money; I found both books in a Las Vegas bookstore back in 1993 and paid a dollar for each!

Thanks for the note, David!