Black Against The Mob 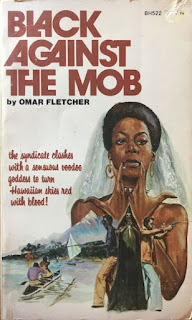 Black Against The Mob, by Omar Fletcher
No month stated, 1977  Holloway House

This Holloway House paperback mines the same territory as the Iceman series – its characters are black and proud, baby! Omar Fletcher, who appears to have been a real person, turns out a fast-moving pulp crime novel (with touches of horror) that comes off very much like the literary equivalent of a Blaxploitation film. But speaking of which, disregard the misleading cover, with the Pam Grier-esque babe; the cover artist and blurb writer very much oversell the “sensuous voodoo goddess” angle.

This is quite possibly the angriest book I’ve yet reviewed on the blog. Anger against whites, Italians (aka “guineas”), America, you name it. The kind of book where the “hero” actually considers raping an otherwise-innocent mob secretary because his own woman was raped (and killed) by mobsters. Racist invective runs throughout the book, like how the protagonist, angry black criminal Malcolm Lemumba, thinks of Italians as, “Guineas! Jive mothers somewhere ‘tween white folks an’ gorillas!”

Not that Malcolm doesn’t have reason to be an angry young black man. In background material that is only hinted at, we learn that his wife and kid were “accidentally” killed by white cops during the riots of the late ‘60s. Now Malcolm hates “all whites,” though this doesn’t stop him from occasionally banging a white chick. In backstory that’s just as vaguely sprinkled throughout, Malcolm’s next round of hardship came just recently, when a girlfriend of sorts was raped and killed by mobsters out for revenge; Malcolm and his group had been knocking over mob-run establishments, culminating in a war between the two groups, with Malcolm even retaining the services of some “black Muslim brothers” in the fight.

Now, only Malcolm and his friend Omar Nusheba are still alive; even the Mafia don who was after them has been killed. Malcolm is known for a pair of pearl-handled Lugers, and he stashed these at the crime scene back in New York, hoping the two black Mulims with blown-apart faces would be confused with him and Omar, and the mob would think they were both dead. The two plan to drive to Los Angeles and fly to Hawaii with the cash they lifted, living out their years in paradise far from the Mafia.

Promptly the two get in a bar fight in LA with some whites who don’t cotton to how Malcolm and Omar are throwing money around, especially the way the two hot blonde waitresses keep responding so eagerly to them. The babes end up going back to their hotel room, but Fletcher is not an author to dwell much on sleaze – to be sure, there are some jawdropping phrases here and there, but as for actual hardcore stuff, nothing at all. Meanwhile our two heroes have indeed been spotted by the mob, and next day they are already running for their lives again. Malcolm puzzles over the how quickly this turnaround has occurred in one of those jawdropping phrases, “It was almost as if [the Mafia] had eyes in the pussy he had fucked the night before.”

Thanks to what appears to be an underground network of blacks who protect one another from “the Man,” Malcolm and Omar are able to evade the pursuing mobsters and get some guns from a dealer in Watts. Malcolm even gets a Luger, leading him to ponder over how fated all this seems to be. There are gunfights here and there, and Fletcher does dole out the gore, to a certain point, but nothing too extreme. There is some unintentional humor (at least from a modern perspective) when the Watts dealer has a master plan to get Malcolm and Omar’s guns onto the plane for Hawaii; all he does is stage a fight with some of his guys in the terminal, as a diversion, and then tosses a bag with the guns to our heroes as they pass by the security gate!

Near the halfway point the action moves to Oahu, Hawaii. However the mob is here, too, having found out Malcolm and Omar’s destination. The narrative often cuts over to Don Marco, in New York, consigliere to the previous don and still out for the blood of Malcolm and Omar. He wants to continue the vendetta. But our heroes are not without friends, themselves. The Watts gun-dealer told them to seek out Papa Loa in Oahu, a Haitian voodoo “hungan” who operates deep in the jungle, far from the “white man’s world.” The narrative treads an uneasy line between voodoo superstition and mob-busting action. Papa Loa has a group of followers, one of whom is Luani Kei, she of the vacant eyes and freezing cold skin; the “sensuous voodoo goddess” of the cover who barely even appears in the actual novel. Fletcher toys with the idea that Luani and many of Loa’s followers are actually zombies (of the voodoo sort, not the brain-eating sort).

The book is always entertaining, and Fletcher is a good writer, but it does settle into a repetitve rut…Don Marco heads on down to Hawaii to oversee the vendetta, and there are several parts that follow the same setup – Malcolm and Omar will sneak into the don’s high-rise hotel, threaten him or kill some of his goons, then head back to the plantation to talk to Papa Loa. This sequence of events repeats a few times. And these two are straight-up ‘70s mob-busters along the lines of The Executioner, The Revenger, or myriad others – only black!! Seriously though, these guys bust up some serious Mafia shit, making it all look easy.

The supernatural elements get stronger as the novel progresses. For one, Malcolm begins to wonder over how easily everything begins to happen for him – he sneaks to Don Marco’s hotel, for example, and it turns out the goons forgot to a lock a window, etc. In this way he suspects that Papa Loa is on to something, and that the voodoo gods are aiding he and Omar in their war against “the white man.” Also Malcolm is both infatuated and repulsed by Luani Kei, though Fletcher is maddeningly oblique about the repulsion part. There are a few parts where Malcolm sees Luani in daylight and something about her visage makes his flesh crawl. Again the insinuation is that she is a zombie. Also, Malcolm seems to forget what happens on the nights he spends with her, though it appears he does not have sex with her.

The climax is very much on the supernatural tip; Papa Loa vows to Malcolm that the voodoo gods have already deemed that Don Marco will die. Malcolm grudgingly waits to see what happens. The finale plays out with various mobsters either getting strangled or decapitated (by machete-wielding zombies!). Malcolm, who sort of stands on the sidelines while the final payback is being dished out, once again plants evidence that he and Omar died in the skirmish – and then the two bid Papa Loa adieu and head off for the “hidden island” of Nihau.

As mentioned, Fletcher’s writing is good, staying locked in Malcolm’s perspective for the majority of the tale, and thus filtering the proceedings through his rage. He doesn’t deliver much on the sleaze, other than the occasional oddball line, but he’s up there in the Joseph Rosenberger levels when it comes to the racist invective. I mean I even started to hate whitey while I was reading the book! However one can’t judge Fletcher for this, as the sequences with Don Marco are as anti-black as those with Malcolm are anti-white.

As I say, it’s an angry book, filled with the black and proud rage of the era’s Blaxploitation flicks, and if you like those then you will certainly like this – think of it as sort of a combo of Across 110th Street and Sugar Hill, filmed on the same location as Hawaii Five-O. Soundtrack by Isaac Hayes and Don Ho.
Posted by Joe Kenney at 6:30 AM

And according to Hubin's listing of pseudonyms:
"FLETCHER, OMAR. Pseudonym of Rugio F. Vitale, which appears in turn to be the pseudonym of Frank James Bisignano, 1939-2001."
I'll just let the irony sit right there.
http://www.crimefictioniv.com/Part_38.html