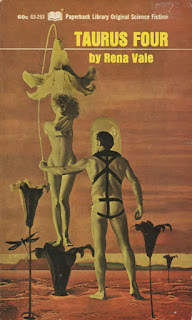 Hippies in space! Well, that’s sort of the premise of this paperback original, or at least what’s hyped on the back cover. In reality the hippies of this “2270 AD” are more along the lines of stone age primitives, with the intelligence level to match. Okay so they’re just like regular hippies…only they’re on another planet.

Rena Vale had a career that was sort of the opposite of Leigh Brackett’s; she started as a screenwriter in Hollywood in the ‘30s, then moved to writing science fiction stories and novels in the ‘50s. Taurus Four was one of her last novels; she died in 1983. The cool psychedelic cover, by the way (which I’m assuming is by Robert Foster, given its similarity to Foster’s cover for Mythmaster), has nothing to do with the actual contents of the book – not sure what the hell’s going on there, but you won’t find anything like it occuring in the novel.

You also won’t find any space hippies of the sort featured in the “classic” Star Trek episode “The Way To Eden” (I put “classic” in mocking quotes but I actually enjoy that episode…I mean Mr. Spock channeling his inner Hendrix on a Vulcan harp, what’s not to love?). Which admittedly is what I was hoping for when I cracked open this slim paperback. Instead, it’s more of a character-driven piece about a portly but determined “space sociologist” who crash-lands on a planet in the Taurus system and there encounters a group of hippies, descendants of ones who were abducted from Earth centuries before.

Our hero is Dorian Frank XIV, out on his first mission; his assignment is to inspect the planet Taurus Four with its two suns and determine if it is suitable for human colonization. But he crashes his ship and is stranded here for two months until the mother ship can come collect him. Dorian is an interesting character; coddled due to the emasculating nature of the 23rd century, in which women run everything. This is total prescience on the part of Ms. Vale, but don’t go dusting off your “I’m With Her” banners just yet – she clearly is not fond of the idea.

In Vale’s future, “space is the man’s world;” women, having cemented their authority on Earth, have no desire to travel in space. Thus it is men who fling about the cosmos, declaring habitable planets for Earth; the women who do go into space usually do so in the capacity of servants to the men. Space is the only place where men can be men, yet they are for the most part confused about what exactly “being a man” entails:

The male aggressiveness was fading out of the human race…Women forged ahead in the professions and in politics; they took over many, if not most of the Earthside positions. As a rule, they dominated their mates, made puppets of them.

Male-female relationships on Earth had become tests of strength…of willpower. Men loved women for their physical charm and grudgingly ceded as much of their independence as necessary to obtain their desires. Women loved men who obeyed their commands.

Damn, if I could go back in time I’d have the preacher read that last one at my wedding!

Dorian encounters all manner of flora and fauna on Taurus Four, which has an Earth-like atmosphere, save for the two suns; one is red, and the “night” sun is a white ball of fire that paints the sky in psychedelic hues. There are tree roots that move in the soil, fawn-like creatures that are harmless, bats that nearly rip Dorian to shreds, and intelligent bear-like creatures which Dorian is certain are not native to the planet. He will turn out to be correct; these are the daels, or at least so referred to by the transplanted hippies, and they too are part of a colonization party.

The hippies don’t appear until a quarter of the way through; Dorian stumbles upon them after a near-fatal encounter with vampire bats. Their presence initially baffles him, as Taurus Four was marked as an uninhabitated planet. Plus they are not only humans, but Earthlings – ones who speak to Dorian in English, at that. Though it is a crude, gutteral English, and these people have descended fully into tribalism. They go about nude, the men sporting long hair, rangy beards, and nails so long they are claws. The women are practically baby-making machines, some of them having born fourteen childreen. Even the “crones” are naked, much to Dorian’s discomfort.

Dorian gradually learns the history of the colony, his memory sparked by a tale told by elderly “witch” Bernedine, who recalls a story from the time of “twenty grandmothers ago.” Basically, a hippie in Haight Ashbury in the late ‘60s was approached by a reptilian being, which promised to take the hippie and his flock to a faraway place where they could live free, in the commune fashion the hippies so loved. Dorian instantly understands what happened; in the time of the “Space War,” two hundred years before, the “green Saurians from the Cygnus chain” abducted many humans; abductions which eventually sparked the war.

In his history classes, Dorian heard vague mentions of hippies that disappeared in that long-ago era, but Dorian in his time has no concept of the hippies, only that they were part of a “drug culture.” He realizes that he has stumbled upon the descendants of those Saurian abductees, living here in primitive squalor on Taurus Four. And they are a primitive bunch, sacrificing “virgin white” women to the “god in the well” so that the daels – ie the “devils” in their pidgin English – won’t come eat everyone. There is also the “daelsnarks” in the ocean, which apparently refers to sharks, but these go unseen.

Leading the hippies is a young man named Pete – all the leaders are named “Pete,” after the original Haight Ashbury hippie who brought them here – who uses his role to exercise his mean streak. There’s Billum, a young hippie who doesn’t appear to be as distrustful of Dorian as the others are. And most importantly there is “virgin white” Teeda, a lovely blonde Dorian falls instantly in love with, despite her innocent, “fawn-like” nature and primitive attitudes. Dorian is already engaged, his fiance back on Earth the usual strong female type, thus he constantly puts off the temptation to “take” Teeda, even though she clearly wants him and he her. There’s also the fact that she is being saved in her untouched condition to be given as the Great Sacrifice to the god in the well, part of the ancient belief structure that keeps the daels and daelsnarks at bay.

Speaking of which, these “savages,” as Dorian refers to them, are so primitive that the “god in the well” is merely one’s own reflection when gazing in a certain pool. They have regressed to such a state that they don’t even understand they are looking at their own face in the water. One thing they share with their hippie forebears is their love of weed; their “Sacred Garden” is filled with hemp, though surprisingly this isn’t much exploited by Vale. I mean there isn’t a single part where Dorian gets high. Instead, he spends most of his time transcribing “spools” of his sociologist findings, to be used as the material for a groundbreaking study upon his return to Earth.

Dorian also spends most of the time under guard in a cave, his precious “pack” with his stunner gun, clothes, and other gadgets separated from him. The hippies bring food to him; they only eat “manna,” a native fruit. He also gets occasional visits from Teeda, with the two falling in love, though Dorian has a habit of condescendingly referring to her as “dear girl.” Teeda’s need for Dorian’s strength is a new concept for him, given the strong females of Earth; subtext capably conveyed by Vale. Again, Vale’s connotation is clear that a “girl power” future might not make for the most attractive concept.

Despite the coddled nature of his upbringing, with an overbearing mother and an overbearing fiance, Dorian is pretty tough, mostly due to his space training. Thanks to a few judo classes he can toss these dirty hippies around with ease; for “play” the hippie men like to engage one another in brutal wrestling matches, using those nails as claws. Even the toughest of them doesn’t stand a chance against portly Dorian, who due to the hardscrabble nature of hippie life on Taurus Four quickly slims down.

When Dorian learns that Teeda is planned as the next Great Sacrifice – to be raped by an increasingly-insane Pete beforehand – he makes his plan to escape the savages with her. But Dorian’s end game is a bit vague; he has no plans to take Teeda back to Earth with him, as his “grasshopper” transport ship is a single-seater. Also, he would be expressly forbidden to do any such thing by the captain of his mother ship. Dorian also has no plans to have sex with Teeda, to remain faithful to his fiance back home. But anyway he manages to stage an escape, thanks to a pair of friendly hippies, one of whom is Billum, Teeda’s brother.

Vale works in an imminent invasion subplot which is a bit clumsy; we’re told the bear-like daels came here long ago as part of a colonization fleet, but their ship crashed, and now the modern daels – who occasionally steal away hippie children and eat them! – are but pale reflections of the original crew. However a second colonization ship is supposed to come at a later date. Gee, guess when they’re coming? That’s right, shortly after Dorian crash-lands on the planet. Dorian learns all this from a dael female who “sings” her tale in their bizarre language, a language which Teeda understands, thanks to some tutoring from witch Bernedine. Dorian will be able to use Teeda’s knowledge of this language to get her off the planet, so as to warn off the invading ship of daels.

The finale sees Dorian finally mete out some payback to nutjob Pete, who we learn, upon finding out that Dorian and Teeda had escaped, went full-on psycho, even raping and killing an 8 year-old girl! His payback isn’t bloody enough, but he does show his cowardly colors when Dorian, a full-on man now thanks to the rigors of Taurus Four (not to mention the strength which has been borne in him thanks to the compassion and respect Teeda has shown him), challenges Pete to combat. Vale gets a few more digs in on her post-feminist future with the captain of Dorian’s mother ship, finally having come back to pick him up, marrying Dorian and Teeda as a slap in the face to Dorian’s mom and fiance, given how much trouble they got the captain in for abandoning Dorian when he crashed on the planet.

Overall Taurus Four is a quick, mostly entertaining read, though to tell the truth I would’ve preferred something more along the lines of “The Way To Eden,” with actual space hippies.
Posted by Joe Kenney at 6:30 AM