My letter from Gold Eagle

Back in the early days of the blog I posted my 1988 letter from Gar Wilson; in it I mentioned that I’d also received a letter from Gold Eagle at the time. Well, here it is – but this time, thanks to the magic of technology, I was able to scan it.

As a bit of background, this response was to an unsolicited idea I’d sent Gold Eagle for Phoenix Force, in which the team goes to Mars for some reason that now escapes me. I should mention I was like 13 at the time, so it sounded like a good idea to me. So then it’s pretty cool that GE’s “Reader Management Editor” Judy Newton (who was married to Michael Newton at the time) actually took the time to write me back – she could’ve just trashed my letter and grumbled “stupid damn kid, wasting our time,” but instead she wrote me this nice letter: 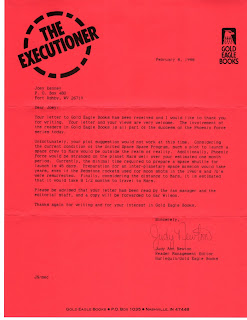 I also love how she so politely butchers my far-out idea!

As I mentioned before, the biggest thrill I recall at the time was her mentioning that a copy of my letter had been sent to Gar Wilson, and it was just a few days later that I received a letter from him; big thanks again to Stephen Mertz, who let me know the other year that the “Gar Wilson” who wrote me was William Fieldhouse.

I recall I had another letter from Gold Eagle, from a little later or something, in response to a question I’d written them – there was a cable movie titled Jake Speed, about a men’s adventure character who was real, or something, and I saw it on HBO when it was first broadcast. The movie occasionally showed some Jake Speed paperbacks (I haven’t seen the movie since then, by the way), and I instantly noticed the Gold Eagle logo on them. I wrote GE asking if they had plans to release the actual novels, but as I recall their response, which was shorter than this one, informed me that those books were just props for the movie and that there were no plans for a Jake Speed series. Anyway I can’t find that letter, but if I ever do I’ll post it as well.
Posted by Joe Kenney at 6:30 AM

Ha! Very cool. Maybe you should write an action/adventure novel set on Mars. I'd read it!

Pretty cool! :) And it's nice of them to take the time to treat your idea seriously, giving you actual reasons why it wouldn't work so you wouldn't feel bad. It's nice of 'em to show a little respect for enthusiasm, instead of just a dismissive "That's goofy." :)

When i was around 13 I sent a short story in to Twilight Zone Magazine, as part of some story contest. It was some terrible thing about some guy who got a fever that made him go crazy so he went on a shooting rampage (during which he made a bunch of smart-assed puns, like Edge always did in the "most violent Westerns in print" that I was reading constantly at the time). Then at the end of it you see some kids playing with a tennis ball he'd been using at the opening of the story, and contracting the same fever from it. Really dumb stuff, and of course they didn't publish it (I got beaten out by the in-print debut of... Dan Simmons! So, I really don't feel bad about it). All they sent me as a reply was a post-it-note-sized reply of "We're sorry but your story doesn't fit our current needs at the time" or whatever. I was fine with it, it wasn't a bad rejection, but a more detailed reply like the one you got would've been much cooler. :)

I agree -- it is cool that she made the effort to explain why your plot wouldn't be feasible (even though, let's face it, these novels are fantasies, and anything can be explained away) in an effort to let you down easy. I haven't read any Phoenix Force, but I would read yours about fighting bad guys on Mars!

I think GE dropped the ball by not publishing a Jake Speed series.

I also think a series featuring John Trent, the ninja introduced in Phoenix Force, and readers still to this day remember fondly would have done gangbusters, but they never took advantage of the character's popularity. Seems strange to me.

Glen, Ignoring the John Trent appeal is the least of Gold Eagle's unexplainable sins, for there are many.

Joe, Dude. Write the book. We both know you're a good writer, in more ways than one, and it would be a hoot to read after all this build-up! I want to read about commandos on Mars! Disguise it as an used ms. of Buck Rogers if you have to. That's been done before.

I know you can.

Heck, given what's popular on TV now, an interplanetary commando force is in style!

That's lovely, that they would bother... Can't see any UK publishers ever bothering, let alone the New York Mafia-owned ones (allegedly).

Brian - Gold Eagle had many unexplainiable sins, I'm sure, but at the end of the era they were the last ones standing, so they must have been doing something right. I know that some writers, like Mark Ellis, had serious issues with them (though his seems to be about an editor trampling over the series he created, and I can never quite get my head around that as he surely realised that by doing it for them he was relinquishing any control?), but I found the very same editor a pleasure to work for for years, as indeed were the women from Harlequin's romance line that followed him.

GE had a lot of faults, but I worked for them over a 15 year period and I'm glad I did. It's hard to get paid for writing fiction these days, and they were a solid market. It's why I now write treatments for documentaries for a living - no one wants a pulp hack anymore! Not those that qwould actually pay for the pleasure...

By the way, he's right, Joe - you SHOULD write that book!

I always wonder about those "prop" books and magazines in stories and whether you can find them someplace, except the ones that are OBVIOUS props because of how comical they look - and even some of those can fool you.
(I'm still wondering about that SF magazine Jack Kruschen is reading in ANGRY RED PLANET.)

Not quite the same, but the 'Edge' western series once had a contest where you could be written in to one of the books - though I think it was just a marketing ploy, as they never mentioned it again.

Bob -- Thanks! I only wish I remember what my "Phoenix Force goes to Mars" plot actually was.

Zwolf -- Where have you been, man?? Great to hear from you. (And when is your next men's adventure review post gonna be??) I've gotta tell ya, I really like your Twilight Zone idea -- sounds like something Zebra Books would've turned into a foil-embossed 400-page paperback (with massive print).

Marty -- Good to hear from you too, man, and thanks for the interest in that book! Yes, I agree with you, these stories are all basically fantasies, so the concern over "realism" has always puzzled me. Hell, in "the real world," a team like Phoenix Force wouldn't get a thing done due to all the government red tape.

Glen -- I would've gone ga-ga over a John Trent series back in the day. He was always my favorite PF member, even though technically he wasn't really a member of the team...

Brian -- Thanks for that! You all now have me thinking about a Mars story. Also, it sounds as if you might be privy to something I have never discussed on this blog...

Halojones -- I'm so out of touch I don't even know WHAT is on TV these days, or Netflix or etc. Wait, I did watch a few episodes of the MST3K reboot, which was better than I thought it would be (I was prepared to hate it). Though the new Servo kind of sucks and I got sick of all the virtue-signaling in the riffs...practically every "riff" was a mocking of the "lack of diversity" or the "sexism" and "racism" in the old movies they were watching. Twenty years ago, Mike and the 'Bots shamelessly spoofed Asian accents in their riffs. Boy have the times changed, huh? At least interplanetary commando forces will never go out of style!

Drew -- Thanks a lot for sharing some thoughts about your time with GE (and also thanks for letting me know the title of your book in that other comment thread)! FYI, someone recently posted a comment on my Casino Royale review that our "best bud" Anthony Horowitz is now writing a "prequel" to CR (because, to quote Homer Simpson -- "Everyone loves prequels!"). Can't wait to see the revisionism he brings to THAT one... You should contact Gildrose (or whatever the literary Bond owners call themselves these days) and tell them to give YOU a shot at a Bond novel...

Grant -- As usual you and I are on this bizarre similar wavepath, as just the other month I watched The Angry Red Planet for the first time since I was a kid! And yes, I noted that pulp magazine. FYI man, I never got to see Thunderball in the theater last month (in case you saw that response I left you on another thread), but I've already purchased my ticket to see You Only Live Twice the week after next -- I'm sure you like that one as well, given that it too has a villainess. That one is a close second favorite for me in the Bond franchise, after TB.

Guy -- Sounds interesting! Thanks for letting me know about that! I wonder if the winner (if there even was one) became just another of Edge's victims?

I recall the 'Edge' contest well, as I entered it (heh, heh).
Wish I could remember the # it was in but, in a failed attempt to grow up, I got rid of my complete collection some time ago. Can you guess I totally regret it now? ;)

I recognise that font! That letter was typed on an Apple II and printed on an ImageWriter II, set to NLQ (near-letter-quality) at 12-pitch! Those were the good old days.