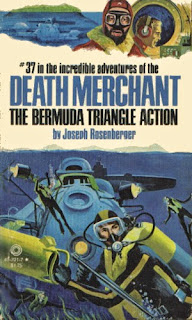 The 37th volume of Death Merchant treads familiar territory, as Joseph Rosenberger turns in an installment that seems much indebted to the plots of #17: The Zemlya Expedition and #30: The Shambhala Strike – this time nutjob Richard “Death Merchant” Camellion again visits a massive underwater Russian complex, and again (sort of) meets some aliens (of the outer space sort). However he’s more worked up about people who talk while eating.

Rosenberger as ever goes full out with his manuscript – the book comes in at a whopping 177 pages of small, dense print; a whole heaping ton of it could’ve been cut for a more streamlined (and less taxing) read. For example, we know from chapter one that those wily Russians (aka “pig farmers” and “ivans”) are up to no good on the floor of the ocean, near Jamaica; drilling into the tectonic plates or somesuch to trigger massive earthquakes and other destruction across the United States. Oh, and while they’re down there, they might as well look into all those “UAOs” everyone’s been talking about (aka Unidentified Aquatic Objects).

Then when we cut over to Camellion, here in Kingston, Jamaica with the usual group of easily-confused comrades, we endure a long, long chapter where everyone exposits on what the Russians might be up to down there. As ever, Camellion’s the only one who gets it; everyone else doubts those damn pig farmers could be that evil. The fools! Meanwhile Camellion munches on figs from a box and insists on waiting until he’s finished chewing to talk – he becomes “annoyed” with those who talk while eating. And that’s pretty much the entire glimpse we get into our hero’s personality (such as it is). As ever, Richard Camellion is a total cipher, more of an android than a man.

He’s also the Walking Encyclopedia we know from other volumes; a US nuclear sub disappeared here three months ago, and Camellion’s certain that his own theory is the correct one – that the notorious Bermuda Triangle of this area is in reality a rift in the space-time continuum, and the ship has merely slipped over into another dimension! We get lots of exposition about the Triangle, as ever Camellion expositing from his encyclopediac memory. But unfortunately none of it will ever progress into full-blown sci-fi (despite the arbitrary appearance of aliens later on), and instead will devolve into the usual endless gunfights the series is known for.

Camellion’s main comrade here is Josh Forran, a Navy Intelligence operative stationed in Kingston for years. As usual, the supporting characters have more personality than Rosenberger allows for Camellion, even if the personalities manifest themselves at the most arbitrary of times, like for example during the climactic battle: “Forran was still fighting the nostalgia he felt over having been forced to leave Kingston, Jamaica. All his Dvorak records were still in Kingston.” This mind you is while he’s dodging Russian bullets. There’s also Billy Coopbird hanging around, a Jamaican with an Ivy League education who enjoys speaking like the cliched native for tourists.

But Forran is Camellion’s main teammate for the most part; together they board a mini sub that has fancy “invisibility” gear and head into the depths. On the way they, with the crew of the mother ship, see an actual UAO – a massive underwater craft that defies reality. They watch in shock as it sits there on the ocean floor, then takes off at an impossible speed. Camellion, who refers to the thing as a “OINT,” ie an “Other Intelligence,” takes it all with the same sort of casualness he displayed for the aliens he met back in The Shambhala Strike. And for that matter, Camellion never even once pauses to reflect to himself about those earlier aliens.

Nope, Camellion’s more like, “Okay, that’s that – on with the mission.” To me, this represents probably one of the main sources of frustration about the Death Merchant series. It has all this fringe science and supernatural stuff, but all of it’s just used as window dressing. What does it matter that you have aliens, UFOs, spontaneously-combusting people, and myriad other weird things, when your protagonst clearly couldn’t give two shits about any of it?? Even later, when after the mission the Navy dudes find an object of alien metal mysteriously deposited in their ship, clearly left (somehow) by those aliens, Camellion basically shrugs and forgets about it.

But anyway Camellion and Forran make their way to the massive underwater Soviet complex, which of course brings to mind the similar one in The Zemlya Expedition. Not that Camellion even once reflects back on that, either. It’s sad when the reader actually knows more about Camellion’s past assignments than Camellion himself does. About the only bit of continuity in the book is an arbitrary bit where Camellion thinks of “the coming horrors” of the 1980s, in particular those having to do with spontaneous human combustion – clumsy foreshadowing, I suppose, of the next volume.

They infiltrate the place and sneak around, Forran “feeling as uncomfortable as an armless poker player.” Soon enough they’re spotted and engaged in a firefight with KGB guards, a bit where we see Camellion’s insanity, as he literally laughs in the face of death. To Rosenberger’s credit, Camellion’s comrades almost always realize that the dude’s a psychopath. After this we’re back to the exposition, as Camellion again faces off with the dumbass intelligence bigwigs who bicker over what the Russians might do, now that Camellion’s gotten visual sighting of their massive underwater drills. Once again, only Camellion insists that those damn ivans might nuke everyone.

One expects a Thunderball-esque underwater battle at the complex, but instead The Bermuda Triangle Action plays out in an overlong (way overlong) battle aboard the ship Camellion and crew are on, which is attacked by Cubans and KGB soldiers. The underwater complex is almost casually destroyed by submarines. Camellion leads a crew of Navy SEALS, armed with grenade-bearing crossbows(!), against the Cubans, leading into another mostly-boring Rosenberger action scene that seems to never end. But at least Rosenberger has a sense of humor, for after shedding copious amounts of blood, Camellion tells Billy Coopbird at the end: “I hate violence.” WTF?? Even Billy is thrown by that one, thinking to himself how there is something “alien” about Camellion, “another kind of presence staring out through his eyes.”

This volume does have a lot of underwater action in it, and I’ve always been a sucker for that stuff, having seen Thunderball at an impressionable age. Or was it the underwater part in For Your Eyes Only that hooked me? In fact it might’ve been, as I saw that one in ’82, or whenever it debuted on HBO, when I was seven or so. But anyway we get a lot of that in The Bermuda Triangle Action, which despite the title and (brief) appearance of an underwater flying object, is really just the same old, so far as the Death Merchant goes.

Here’s Allan’s review.
Posted by Joe Kenney at 6:30 AM

Thanks for the plug. We share the frustration over JRR's constant abandonment of interesting plot threads. I guess when you are pounding out one of these books every 2 months, as he was during this period, you don't have time for a full story. As I wrote:

So: (1) What is "the true secret" of the Bermuda Triangle to which science has thus far been blind? (2) And how will Rosenberger treat this possible entry point "into a different reality"?
Answers: (1) We are given absolutely no idea. (2) He won't.