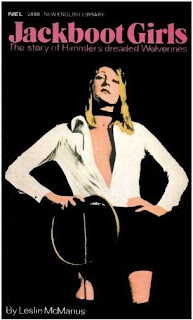 I’ve wanted to read this slim novel for a long time, but the cost has always been prohibitive – like, $60 damn dollars. But in one of those weird flukes I recently found a copy listed online for a mere $1.50.  Justin Marriott has told me that the book would no doubt suck, given that Leslie McManus is a psuedonym of Canadian-born UK hack James Moffat, whose writing is considered terrible even by bad writing connoisseurs.

But the concept! Jackboot Girls is about an all-female squad of bi-sexual and gorgeous German women who are banded together by Heinrich Himmler to form the SS Wolverines, their duty to interrogate male and female prisoners via sex and sadomasochism! And their main uniform is black satin lingerie! And their standard-issue weapon is a whip! A-and their leader is a beautiful blonde lesbian named Helga Schwartz who enjoys having casual sex with her equally-beautiful chief lieutenant Frieda Weber!

I mean, this has the makings of the greatest novel ever written, right?? I’ve gone on the record with my warped fascination for depraved female villains in pulp fiction: Margot Anstruther, Sabrina, Nila Dennis, and especially Ilsa Tausen; all of them were pretty great. But really the epitome of the depraved female villain would have to be the Nazi She-Devils of pulp, in particular the busty jackbooted blondes quite often seen on the covers of men’s adventure mags of the ‘50s and ‘60s, whipping some captured US soldier who stares out at the readers with a look that sort of says, “You know, I’m enjoying this!”

So then an entire novel devoted to these pulpy she-devils would by default have to be great. And damn it all, Jackboot Girls had the potential to be great. If it just wasn’t for Moffat’s lousy writing. To be sure, we’re not talking like atrocious writing here, like Tracker or anything. It’s just that the writing is so ponderous and pretentious.  Manning Lee Stokes would even consider this writing to be overly stuffy. And on top of that the book has that clinical and antiseptic tone I’ve encountered in all of the British pulp I’ve yet read, which further serves to neuter what could’ve been a twisted classic.

Anyway, on to the novel itself. “Novella” moreso, as it’s a slim 108 pages. Tiny print, though, with hardly any white space, so it’s not a quick read. (Plus Moffat’s writing does its best to slow the reader down.) And really it’s not even a “novel” at all – another problem I have with this book is there’s no major plot or character arcs. Instead it comes off like a series of disconnected chapters in which Helga and her Wolverines will torture and/or sleep with their prisoners or each other. (I’ll admit, that sentence doesn’t sound like a valid criticism, but after a while you start to wish there was some meaning to the tale.)

We open before the war has begun, and Helga Schwartz is summoned by some SS guys. They tell her she’s to use her lesbian charms to seduce a female prisoner, and Helga gets the job done, happy to do it. She’s a stonecold Nazi and devoted to the cause, certain that Hitler will conquer the world. After this first successful interrogation Helga’s summoned to Himmler’s presence; he is creating a new all-female SS faction for her, The Wolverines. Moffat keeps intimating that, with her staunch lesbianism, Helga has “thrown down the gauntlet” as far as Himmler’s concerned; one day he might demand that she sleep with him. But this is just one of many subplots that Moffat fails to elaborate on or complete.

But first Himmler puts her to another test. One thing that can be said for Moffat is that he’s not afraid to get lurid and sick; Himmler takes Helga into a dank cell where the woman Helga just “interrogated” is tied up, having been beaten and no doubt raped by several Germans. Himmler hands Helga a gun and tells her to blow the woman away. Helga does without question, and sicko Himmler laughs that the girl was in fact innocent. But this is just the first of many warped scenes in Jackboot Girls, so at least there is some good here…seriously, the warped stuff is about all the novel has going for it.

Instead of moving on with the story, Moffat jumps forward in the very next chapter to a few years later; the Wolverines, we learn in backstory, are now infamous for their successful track record, and their lascivious nature is legendary among the Nazi high command. Moffat switches over to pretty young Frieda Weber, several years younger than Helga’s 38 but just as devoted to the cause. However unlike Helga, Frieda doesn’t mind having the occasional sex with men. Here Moffat gets into a story that ultimately goes nowhere in which Frieda tries to get valued intel from a German Jew, who offers in exchange for an exit visa to set up a famous “Liberator”, ie a member of the internal faction of German citizens who work against the Nazis.

That taken care of, Moffat ranges back and forth from Helga to Frieda, and the reader thinks this is going to become the twisted love story of a pair of lesbian Nazi She-Devils. (Again, the makings of a Great Work, here…) But then Moffat jumps track again, now focusing on a group of Liberators, including a young German girl who has fallen in love with her male co-Liberator…the same man who saucy Liberator leader Elke also has deigns on…cue yet another sex scene between two characters new to the narrative. And this subplot too evaporates like the morning dew; Moffat doesn’t even bother to tell us what happens to these characters, a total dropped ball because Elke is set up as the perfect match for Helga; you expect these two insatiable ladies will have an encounter, but it never happens.

Meanwhile Moffat hurtles on – after a chapter about a Wolverine named Lizabet who gets off on toruture, we dive straight into a four-way torture session as three other Wolverines (Ilsa, Lisa, and Eva) combine salacious forces upon a captured Canadian soldier. Remember, these four characters are wholly new to the text and we know nothing about them and will never see them again, yet Moffat devotes a very long chapter to the twisted shenanigans as the girls first try to make the soldier, Eddy Morash, think they’re English, but then they drop all pretense and take turns screwing him for seventeen whopping hours, by the end of which the poor old guy is “chafed” and wallowing in self-hatred because he’s finally given away the info the gals wanted. And again, the “sex scenes” are so opaquely described that you have no idea what’s going on.

One thing I can say about Jackboot Girls is that the longer it goes on the more depraved it gets, sort of the reverse of the average novel. Now suddenly it’s toward the end of the war and Helga and Frieda are summoned to the decadent castle of Herman Goerring. Supposedly they’re here to root out a mole within the Luftwaffe but instead this becomes another chapter-long sexcapade, with Helga forced into having sex with a Luftwaffe officer by a lecherous Goerring (and Helga nearly puking at the thought that she must have sex with a man), while Frieda meanwhile engages some pretty young girl into lesbian sex while a roomful of Luftwaffe soldiers watch on. After which Frieda orders an officer to blow the girl’s brains out (apparently the girl was the mole, though how Frieda divined this isn’t really explained),and then she tells the shocked and sickened officer that she’s going to have sex with him now, like it or not!

Next chapter, the war is suddenly about to end. Helga and gals are assembled in the Black Forest, where they cast aside their Wolverine uniforms (described as SS uniforms, but I pictured them as leather s&m getups, of course) and plan to break up and escape. SS officers will be sought by the Allies, and obviously none of them wants to be caught. I realized at this point that I was paying more attention to the story than Moffat was; very early in the novel we learned that Helga was a devoted Nazi, and believed fully that Hitler would conquer the world. So I figured now that the end was near, maybe we’d see a little character growth, maybe Helga would realize she was wrong. Nope. She just doffs her suit and says goodbye to the gals – not even a goodbye kiss for Frieda.

Moffat at least closes strong. Helga attempts to escape on foot but immediately runs into an American GI, who prompty takes her to a cabin for sex. Moffat again forgets himself, stating that it’s been “years” since Helga has had to endure a man…meanwhile she just had one in the previous chapter, which was set shortly before Germany’s fall. After escaping she moves on…only to run into an entire squad of American GIs, and after their sergeant has raped her the other men line up to take their turn. This is the worst fate Helga could endure, though ironically you do feel bad for her, despite the horrors she has committed upon innocent people. At any rate the ending is memorable.

So while it wasn’t the novel I hoped for, Jackboot Girls at least attempted to go far out into depravity and sensationalism. It’s just that the stuffy writing and weak plotting sunk it. As I read the novel I couldn’t help but think how much better it would’ve been if another author had written it. But if you are looking for a novel about Nazi She-Devils, it’s certainly recommended; strangely enough, it appears that no pulp authors really took advantage of these characters, so Jackboot Girls is really all there is so far as novels go.

Fiction-wise, the Nazi She-Devils made their biggest impact on the men’s adventure mags of the ‘60s and ‘70s, and I will be doing a men’s mag roundup post on this theme in the near future.
Posted by Joe Kenney at 6:30 AM

Sadly, with these old pulp titles the promise of depravity is all too often squandered by poor writing and an cold (almost apologetic) tone. I have an entire shelf of old adventure or sci-fi novels at home, some of which I spent years trying to track down, and few of them have lived up to the promise of the cover blurb.

This sounds like it could have been a really fun tale, if only a bit more talent had been put behind it.

Keep the reviews coming - I still have space on that shelf. :)