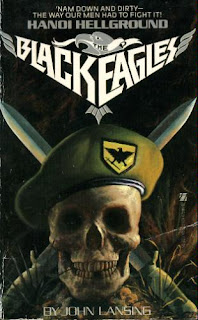 I used to always see copies of this long-running series on the racks of the local WaldenBooks store when I was a kid, but it looks like these days the Black Eagles series is relatively forgotten. I had a few volumes back then but never read them; the series was set during the Vietnam War, and I much preferred the “modern” men’s adventure series. However the covers were great and basically designed to capture a young boy’s attention: awesome paintings of headband-wearing skulls with weapons crossed behind them.

I’d read that someone named Patrick E. Andrews mostly served under the house name “John Lansing,” but Mike Madonna recently told me that this first volume was actually written by Mark Roberts. Well, I instantly had to read it. I hoped for another blast of Soldier For Hire-style patriotism and commie-bashing, and for the most part that’s exactly what I got. However the impact was dilluted over the 330+ pages of small print – I really have no idea why Zebra Books insisted on making their series novels so damn long.

The Black Eagles is the name of a CIA-backed squad of special operatives formed during some unknown part of the Vietnam War (I had a hard time figuring out when Hanoi Hellground took place). They are formed around Major Robert Falconi (don’t you love those convenient last names for protagonists?) and are made up of Americans from each branch of the US military as well as soldiers from South Vietnam and even Korea. First though a little more information on the series, courtesy Stephen Mertz:

That series was a Bill Fieldhouse operation. I don’t recall if Bill actually wrote any of the books solo but he did develop the series, and then farmed out those titles to his buddies. Lansing, by the way: my favorite of Bill’s work is a series of novellas that appeared in Mike Shayne’s Mystery Magazine from 1979-1982, about a US Army CID officer in Europe named Major Lansing. There’s 10-12 stories in that series and they’re all worth tracking down. MSMM was a digest but in reality was the last of the pulps, with a “Mike Shayne, private eye” story in every issue. It’s a place where a handful of us then new guys (me, Fieldhouse, Lansdale, Reasoner, etc) were first published regularly.

Knowing this helped explain the acknowledgements page, where author “John Lansing” thanks WL Fieldhouse (“a gifted creative artist”), Michael Seidman (“a terrific editor”)…and Mark Roberts (“scribbler extraordinaire”)! This might be the very definition of post-modernism, an author thanking his own psuedonym. Anyway I believe this was the only volume of the series Roberts wrote, and it’s a strange thing because throughout it tries so hard to be what it’s not: namely a big and bloated piece of “war fiction,” complete with unecessary and digressive backgrounds on each and every one of the many, many characters.

This first volume lays the groundwork for the series. Falconi is called away from his already-successful strike force to helm another one, this one a multinational squad that will report to the CIA and handle black ops affairs. The first target is sort of like the Nazi pleasure castle that was the target of The Dirty Dozen -- a pagoda deep in ‘Nam that is run by the depraved General Song, a pleasure palace where all of the lurid needs of the NVA elite can be met in private. The focus though is Song’s recently-acquired Russian descrambler, which allows him to intercept Russian and American coded broadcasts or something like that. This detail was a bit vague, but anyway it was a MacGuffin so who cares.

Roberts really fills some pages with background on the many characters who are assigned to the Black Eagles. The only memorable one is Andrea Thuy, a pretty young Vietnamese lady who hates the VC and lives to kill them. Thuy is basically insane but this is only hinted at by Roberts; she was raped as a teen and her family slaughtered, and now she finds joy in murdering the commies. She even gets off on using her looks to ensnare them, happily relating a story to Falconi of how she once got a high-ranking VC on a date and then took him back to his place and, instead of giving him the offered blowjob, instead emasculated him, put a dagger in his heart, and then stuffed the severed organ in his mouth! All of this related, by the way, on Falconi’s and Andrea’s first date!

Falconi and Andrea you see take an instant shine to one another, and Roberts delivers one of his gut-busting sex scenes between the two. Nothing as hilarious as in Soldier For Hire #8, but still pretty great. In fact there are a few graphic sex scenes in Hanoi Hellground, like an endless scene midway through where General Song enthusiastically screws a young VC-lovin’ gal in his pagoda. (The girl is later blown away by Andrea when the Black Eagles storm the pagoda, which I actually found a little off-putting, given that she was just some innocent kid who had nothing to do with anything…plus she was just standing there nude and confused when Andrea wasted her; another sign of Andrea’s insanity, perhaps).

Anyway once a lot of jump-training goes down the team finally undertakes the mission. HALO-jumping into the jungles of Vietnam they slowly work their way to Song’s pagoda. Even here during the mission Roberts still intersperses background info on the characters, which really makes for a slow read. The assault on Song’s pagoda is well staged (despite the aforementioned bimbo-killing), and again much like The Dirty Dozen, with the Black Eagles mowing down undressed VC and NVA who are in the midst of all sorts of shenanigans. Song meanwhile manages to escape.

The only thing is, the pagoda-assault takes place just a little over halfway through the book, and there’s still a long way to go until the end. The rest of Hanoi Hellground is anticlimax of the worst sort, comprised of the Black Eagles trying to track down Song and also escape Vietnam. It just goes on and on, finally culminating in a good action sequence as the Eagles attack an NVA base, taking on superior numbers with their advanced training. But it’s too little too late, and besides which Roberts just ends the novel like he hit his (unwieldy) word count and said to hell with it – Falconi and squad just barely getting on some US ‘copters and taking off to safety.

So it’s muddled and digressive, but on the whole Hanoi Hellground still offers quite a bit of Mark Roberts’s patented goofiness. Such as…

Pointlessly-detailed gore as Black Eagle medic Malpractice blows away a VC he was just trying to save:

He saw the movement via the corner of his eye and ducked away from the Viet Cong’s knife thrust. The blade missed him by more than an inch. Malpractice drew his issue .45 Colt auto while the VC tried a backhand slash.

Muzzle blast singed off the Viet Cong’s eyebrows and crisped the skin around the entry wound. Hot gasses, added to hydrostatic shock, bulged the would-be murderer’s eyes until one popped free of the socket to dangle on his powder-flecked cheek. His head seemed to explode and bits and pieces of the ungrateful Cong splattered on Malpractice’s hands, arms, and face.

“Shit. Now I gotta clean up,” the medic complained.

Dialog that would make Stan Lee cringe, followed by more gore, as a VC tries to get Andrea Thuy to help the Cong effort:

“…Throw down your arms and join us in the struggle.”

“Not likely, son of a snake,” Andrea returned coldly.

“You are a betrayer of the masses! A camp-following whore! Daughter of a diseased sewer rat!” he screamed on, adding more insults.

“I am an orphan whose parents where killed by the Viet Minh. Whose refuge was destroyed by the Pathet Lao, who also raped me. All in the name of liberation. You are a traitor and the son of a traitor. The excrement of a leper smells sweeter than your foul, lying breath. You are going to die in the name of liberation, but you will be no martyr. No one will know your name.”

Slowly, deliberately, Andrea shot him in the groin. The man squealed like a wounded pig, dropped his rifle and clawed at his bullet-ravaged genitals. Massive shock blocked out the nerve passages and Captain Muc sat down abruptly, stunned and immobile. Again Andrea took aim and shot him in the stomach. Then she turned the selector switch to full auto and emptied the magazine into his face.

Headless, the ambitious Muc became truly anonymous.
Posted by Joe Kenney at 6:30 AM

It's funny how pulpy authors will always switch to that stilted, formal-ish dialog tone when they want to indicate that someone isn't speaking English.