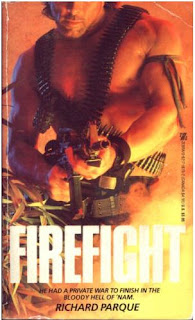 This is another book I discovered through Mike Newton’s How To Write Action-Adventure Fiction. Newton dismissively mentioned the book in passing, poking fun at the obvious Rambosploitation of the cover and also the ripoff nature of the protagonist’s name – Montana Jones. Yep, that’s really the name of our hero. And at least Zebra went all the way with it, as the back cover actually states: “Montana Jones picks up where Rambo left off!”

This is a big novel, too big for its own good, and for the most part it’s plodding and boring. Another thing worth noting is that it actually takes place during the Vietnam war – actually, right as Saigon falls in 1975. This is something the back-cover copyist conveniently overlooked, making the novel sound like a retread of Rambo: First Blood Part II. In a way it is, but whereas the Rambo story got right to the action, Firefight takes forever to get to its central plot: namely, that Montana Jones, who kicked some shit in ‘Nam in the late ‘60s, now must get back there to find and rescue his wife, who he has believed to be dead for the past seven years.

First though a word about the author. A few paperback originals were published by Zebra in the ‘80s under the name Richard Parque, all of them dealing with Vietnam. This is the first of them I’ve read, and I’m uncertain if Parque was a real person or just a house name. I can say though that the writing here is suspiciously similar in some ways to Ryder Stacy, so I wonder if “Richard Parque” could be yet another psuedonym of Jan Stacy and/or Ryder Syvertsen? At any rate the book is copyright Richard Parque, so maybe it’s a real guy – but still, the rampant POV-hopping, the goofy action scenes, the cardboard characterization, the lame and cliched plotting: all of it is just like anything you’d read in Doomsday Warrior.

But man, the book is really dumb. It attempts to cover every base – you like Westerns? It opens with Montana back in…yep, Montana, where he runs a cattle farm and busts broncos. There’s even the cliched scene where some local stooges attempt to hassle him, and Montana beats them all up. There’s also sappy stuff as we see that Montana is trying to raise his son, a seven year old boy who Montana knows needs his mother, or any mother figure – but Montana, despite being like a walking mountain of muscles and a babe magnet, has yet to settle down with another woman, as he is still in love with his missing or dead wife, Hanh.

There’s espionage stuff as we revert to ‘Nam, where Montana’s old squad member Mustang Zimmer (seriously, Parque named his two main protagonists Montana and Mustang, and yeah, you can confuse them real easily, especially given that they’re basically clones of each other) now works for the CIA and is busy setting up Montana. In a too-convoluted and contrived subplot, Mustang (arbitrarily referred to as “Mustang,” “Jerry,” or “Zimmer” in the narrative, which makes things even more confusing) sets up a network of his spies to foil Montana into coming back to ‘Nam. To do so he cables a telegram to Montana, and all it says is “Please help.”

Montana falls right into Mustang’s hands – for whatever reason, Montana immediately believes the telegram came from none other than Hanh! After leaving off the kid with someone Montana hops on a plane bound for the Philipines; from there he hopes to catch another PanAm flight to ‘Nam. On the plane he’s hit on by a groovy stewardess, a Filipino lady Parque doesn’t even bother to name until after she’s been in the narrative for like 30 pages. Also on the plane is Mustang, and the two old Marine pals marvel over this “chance” meeting.

Mustang served under Montana in the war, and here they reminisce over some heavy shit in Nam Dinh, during a heavy firefight in which Montana had to call in a napalm strike on his own location. After this cataclysm Montana, now stranded from his squad, was left for dead in the jungle, only to be discovered by Hanh, a pretty local girl who came across him. Here develops an actual touching but cliched story of how Hanh would care for him, taking him to her peril through VC territory to an American base.

Only Montana refusing to let go of the girl’s hand prevented him from being separated from Hanh forever. We learn that after this they were married, and a year later, after bearing a son, Hanh disappeared one day while visiting the local market. Once his tour of duty wrapped up, Montana headed home, and now seven years later he still loves Hanh and will do anything to find her – hence he spurns the groovy stewardess’s advances. Mustang hits on her, though, and there passes an interminable stretch of pages as the three of them shoot the shit.

Because let me tell you something – Parque sort of sucks as an action writer. The title and cover photo have you expecting Rambo, but instead the novel just plods along. I mean, we are well over 200 pages in and Montana still hasn’t gotten to Vietnam…and when he finally does get there, more interminable pages go by as he wonders how to get to Nam Dinh, a province that’s overrun by VC. The whole novel really is just a sequence of elaborated scenes that ultimately go nowhere and have no further impact on the narrative – the endless bit with the stewardess just being one case in point, as she’s never even mentioned again.

But the ‘Nam stuff is really patience-testing. It starts off well, with Parque capturing the chaos of Saigon as the VC are closing in. The Americans have mostly pulled out and the city is filled with former US-supporters who are desperate to escape the communists. Here too is another go-nowhere subplot where Montana promises to help find a Vietnamese family’s daughter – this entire plot is forgotten and never again mentioned. Instead more time is spent with Mustang, who is still successfully fooling Montana.

A bit of emotional content develops with Montana’s interractions with a teenaged Vietnamese girl he saved years ago, when she was a child. She’s now nearly an adult and she’s in love with Montana…yet she’s also an undercover agent, working unbeknownst to Montana for Mustang…and there’s this confusing part where she sets up Montana to be killed by her VC boyfriend, but Montana turns the tables and kills the VC bastard…and meanwhile the girl was really helping Montana all along…anyway it ends abruptly as do all of the other subplots, with the girl kissing Montana goodbye and telling him she’s moving to France…!

Finally Montana gets a ride to Nam Dinh…that is, after yet more page-filling in the form of this garrulous and disgusting barfly who also secretly works for Mustang; this is another of those pointless bits of subterfuge that makes no sense. What exactly this guy’s objective was is never satisfactorily explained, but really it seems he’s there moreso to fill pages as he drinks and farts and belches, allowing his pretty Vietnamese girl to mop up his sweat. Anyway this guy eventually hooks Montana up with a flight to Nam Dinh, and once Montana arrives there the novel finally gets going, 250 pages in.

Montana heads out into the jungle with his Stetson hat and an M-16…gets in a brief skirmish with some natives…and then runs into, you guessed it, Mustang! Now finally Mustang reveals to Montana that it’s been a setup all along; a Vietnamese general is imprisoned in a VC camp in Nam Dinh and “only” Montana can help free him – the bullshit reason being that Montana briefly lived in the area with Hanh, so he knows the place like the veritable back of the hand. Montana is understandably pissed, but Mustang dangles the carrot that supposedly a woman fitthing Hanh’s description is being used as a nurse in the camp.

This action scene is okay, with Montana a one-man army, mowing down VC. And it turns out Hanh was here, but she’s gone. So Montana huffs it alone into the jungle after freeing Mustang’s general…and then Mustang shows up once again to escort Montana on his fool’s crusade. Seems he rightfully feels a little responsible for Montana being here, and so wants to help him find Hanh. More page-filling ensues as they traipse through the jungle…and they eventually come upon a group of women working the rice fields, and one of them’s Hanh!!

Turns out she was abducted by the VC that day seven years ago; they indentured her to work in their camp as a nurse. Escape was impossible, and the VC also promised that they would murder Montana and the boy if she tried to contact them. More actual emotional content ensues as the Montana and Hanh reconnect (I guess I’m just a maudlin sap when it gets right down to it – either that or it was just nice to see the cardboard characters turn into, I don’t know, styrofoam characters at least). So then the entire buildup of the damn novel was rendered moot, as Hanh wasn’t even in the friggin’ Nam Dinh prison after all – the climatic location the entire 250+ pages of the narrative had been building up toward!

At least it all leads to one last action sequence, as the four of them (Hanh bringing along a girlfriend to help out – and one who true to expectations ends up falling in love with Mustang) commandeer a PT boat and blitz their way across the border. There’s a bit of tension here as you do hope they’ll make it, and Parque really rubs it in with lots of scenes of Montana and Hanh happy just to’ve been able to see each other “one last time.”

But come on, you know what kind of ending the story’s going to have – however Parque doesn’t bother to wrap up any of his loose ends, like the missing Vietnamese girl Montana promised to find, or the reunion of Hanh with her son back in America, or even the groovy Filipino stewardess, who no doubt waited and waited and waited for either Montana or Mustang to show up in Manila for the date they promised her.
Posted by Joe Kenney at 6:30 AM

Wasn't there a sequel?

Brian, thanks for the comment. No, it doesn't appear there was ever a sequel...in fact this might've been the last novel Parque published. Most of his other books appear to be about air combat in Vietnam.

Why does the cover art guy have ammo belts when he's using a magazine-fed rifle? (answer: because that's what Rambo had)