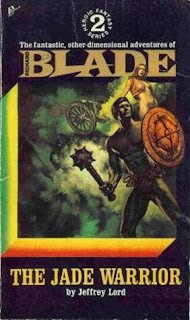 This second volume of the Richard Blade series is a dud for the most part; this time Blade ventures once again into Dimension X, where he finds himself on a world that’s basically molded after medieval China and Mongolia. Treachery, suspense, and slavery take center stage this time, with barely any action, author Manning Lee Stokes filling pages with abandon as he bloats a tepid story to preposterous proportions.

I guess my main problem with this series so far is that there’s no goal. Whereas the typical men’s adventure novel is very goal-driven – killing some mobsters or terrorists, stopping a doomsday device, rescuing someone – the Richard Blade books really have no internal purpose. There’s a vague mention that Blade’s mission is to go to Dimension X to research things that can be brought back to our dimension (now referred to as “Dimension H” by Blade and his government cronies), but once Blade gets to these other worlds he very, very rarely thinks back to Earth or reflects on any sort of mission; he just goes along with whatever’s happening on that particular world.

For example, The Jade Warrior clearly takes place in a Chinese/Mongolian sort of world, yet Blade never reflects upon that fact. Apparently he doesn’t realize that the egalitarian, almond-eyed “Caths” who live behind their “Great Wall,” fighting eternally against the war-loving “Mongs” who are led by an insane “Khad” are all exactly like the Chinese behind their own Wall, fending off Genghis Khan and his Mongols. I mean, does Stokes think his readers aren’t going to notice this? Why not just have Blade say, “This shit is exactly like back on Earth, with Khan against the Chinese!” But instead this never occurs to Blade, who as in the previous volume just goes wherever the characters and plot take him.

First though the tale opens in “modern” Britain, aka 1969 (the year The Jade Warrior was first published), with Blade getting nagged at by his fiance. This entire scene was irredeemably goofy; Blade is supposed to be James Bond (meets Conan, of course), and who wants to read about a domesticated Bond? And yet that’s just what Blade is, here; he’s engaged to be married and his fiance is pissed that she has no idea what Blade really does for a living, or where he disappears to for long portions of time. And Blade sits and listens to it, placating her, telling her he loves her, etc. What makes it more bothersome is that this subplot is forgotten until the final chapter, with Blade hurrying home to his girl, chastising himself that he’s “in love,” whereas meanwhile he’s scored with two other babes in the meantime, and even gotten one of them pregnant!

But I’m getting ahead of myself. With new improvements to the computer that sends Blade into Dimension X, his superiors Lord Leighton and “J” will now have access to all of Blade’s memories when he returns. More importantly it will allow Blade to remember his own world while on this alien one; the previous volume was muddled in that Blade’s memory of his true home would conveniently come and go. But anyway this entire Dimension X project still rings hollow and Blade has no clear mission at hand; they just strap him into the computer and send him off once again, hoping he doesn’t get killed or whatever.

"Dimension X" is the name Deighton and J have given to the network of worlds which apparently co-exist with our own, and Blade emerges on this one right after the latest battle between the Mongs and the Caths. Blade, posing as a corpse in some nice jade armor he took from one of the bodies, is hauled by Cath warriors through the massive Cath Wall. He’s taken into a chamber where the incredibly gorgeous Empress Mei looks down at the “corpse” – turns out Blade’s in her dead husband’s armor and Mei just ran a successful assassination plot on her husband and wants to view the body.

There’s a bunch of plotting going on in The Jade Warrior, and this is just the start of it. Empress Mei is shocked to discover it’s some other dude beneath her husband’s fancy helmet – and of course she’s got the instant hots for studly Blade. Plus Mei herself is beautiful and has a rockin’ bod (a fact quite often mentioned by Stokes), so the two go at it posthaste. Blade instantly “subdues” the gal with his good loving and by the end Mei’s a purring cat who is ready to co-rule with Blade…if it wasn’t for those damn Mongs!

We learn that Mei has it in for the Khad, the Mong leader, and especially for the Khad’s sister, Sadda, who we later learn was having an affair with Mei’s now-dead husband. Word soon spreads about this new guy with the Empress – she spreads the lie that Blade is an official visiting from the Empire’s capitol from far to the north, thus explaining Blade’s non-Cath looks – and the Khad issues a challenge that “Sir Blade” must battle his top fighter. If Blade wins the Mongs will leave, but if he loses the Khad wants Mei to turn over the massive jade cannon that stands over the Wall.

Here follows a very protracted scene where Blade battles the top Mong fighter to the death. It just goes on and on, from jousting to hand-to-hand combat. Just as you’d expect, Blade wins, but unexpectedly he’s captured immediately by the wily Khad and taken away. What’s even more unexpected is that the entirety of the narrative’s remainder concerns Blade with the Mongs, with Mei and the Caths not returning until the very final pages.

What’s sad though is the Cath material is more interesting. The Mongs are of course just Mongols, the same mentality and lifestyle, and it gets real boring after a while. But first the novel becomes a Gor clone, with Blade now the object of Sadda’s affections; shackled as a prisoner he endures all sorts of abuse before being “promoted” to bedchamber slave, where he cleans up after Sadda’s women and etc. Finally he is ordered to the woman’s bed, and Stokes describes Sadda as basically the same as Mei, only maybe a little more ruthless and a little less gorgeous.

There are a lot of sex scenes in this volume, relayed in the expected Manning Lee Stokes style – which is to say, overly literary. I’m not sure how the guy does it, because his style shouldn’t work for the men’s adventure genre. It’s too affected, too stilted…but then, this actually works in favor of the series vibe. But still it comes off more like something from the 1930s than a piece of 1970s pulp – that is, save for the slightly more explicit sex scenes. Anyway Sadda too is so mind-blown by Blade that she begins to cling to him, and for the rest of the novel this is pretty much the plot, Blade rising to more stature with the Mongs due to his liason with Sadda.

Plotting and counterplotting take up the brunt of the “action,” with Blade becoming friends with Morpho the dwarf, court jester to the Khad but who is secretly plotting against the insane Mong leader. Then there’s Rashtun, the Khad’s chief lieutenant, who himself is plotting against the Khad. As for the Khad himself, we learn he’s a right bastard, given to fits of madness where he can only satiate his sick desires with young girls…there is an extended bit later where the Mongs travel across rough terrain and Morpho summons Blade for help; turns out Morpho has a daughter who is of the age that the Khad prefers, but she’s Morpho’s secret, hidden with the “dung gatherers” at the rear of the caravan (they gather the dung for fuel, by the way…the things you learn in these books).

It all just goes on and on with little sparkle. Only one moment late in the game serves to bring the reader out of his stupor, as Sadda reveals to Blade that he’s gotten her pregnant. This is something I’ve yet to read in a men’s adventure novel. Blade for what it’s worth is supportive and is now against Rashtun’s plan to assassinate Sadda along with the Khad – Sadda you see is just as ruthless as her brother. But Blade wants to protect his unborn child. This adds much suspense to the climax, which is otherwise boring as the Khad gets in a prolonged and incidental battle with the “Sea Caths” they encounter late in their journey.

Blade’s never certain when he’s going to be pulled back to Earth, but he starts to feel the now-expected pains in his mind after he’s been here several weeks; sure sign that Leighton and J are “making adjustments” to the computer to reel him back home. Conveniently enough it all goes down just as the plot wraps up, with Morpho and Rashtun launching their attack (Stokes destroys the whole Sadda plotline thanks to Morpho’s brash actions), Blade being quickly reunited with Mei (who believed him dead and thus declared him a god, statues of Blade now worshipped all over the Cath empire), and Blade being summoned back home right as Mei’s about to have sex with him!

And that’s it, just a quick wrap with Blade going home to hook up again with his fiance…never mind that he just had two women fall in love with him, one of whom was about to bear him a child. There’s no resolution to what the point of this mission was, no learnings from this latest journey into Dimension X; just another day on the job for Richard Blade.

So as you can see this installment wasn’t much fun, boring for the most part, and seemed to forget what it was for the majority, coming off more like John Norman than Robert Howard.
Posted by Joe Kenney at 6:30 AM

I read this book a couple of years ago. I've got a pile of Blade issues, but not much desire to read them, because - as you say - they just aren't that great. He goes someplace, gets involved in some random plot, kills a few dudes and nails a few babes, then gets called back home. There doesn't seem to be anything that ties it all together - even Quantum Leap had some kind of end game for the story.

And yes, for a guy who's supposed to be incredibly intelligent and clever, he doesn't pick up on any of the historical similarities. Stokes would have actually done himself a favor by hanging a lantern on that, but instead it just looks like laziness on his part.

As Blade is still published in France and has reached the #200, does anybody know how and if they tweaked the formula?

I just read this book and found it great entertainment with an engaging plot and a lot of fascinating characters. You mention Rahstum, who along with Baber (the legless guy for whom Blade makes a wheeled platform), were Caucas (Caucasians). Yeah, the parallels to reality were thinly veiled.

For English majors, there's a Sea Cath king named Ozmandi, followed by Khad's piling dead Sea Cath corpses and writing an epitaph that's a play on Shelley's poem Ozymandias. I actually liked that, as if Stokes was winking at the readers who would pick up his allusions and references. Like the Mong god Obi, kept in a black box that the Mongs transport with them, which brought to mind a cross between the Muslim Kaaba and the Hebrews Ark of the Covenant.

Yeah, the book was more of a court intrigue story, but one I enjoyed and which has me wanting to read the third book. I did appreciate your review, however, and it did draw my attention to a few weaknesses.