Hitman #2: Let Me Kill You, Sweetheart! 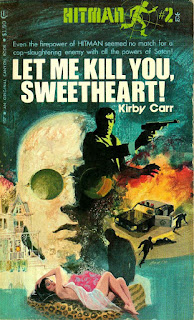 Mike Hitman Ross once again dons his “black nylon suit” and “cowl with eye slits” and prowls the streets of Los Angeles in the second entry of this obscure series. Whereas the first volume uneasily traded between goofy humor and lurid sleaze, Let Me Kill You, Sweetheart! has a firmer grip on its tone, and comes off like a horror-tinged installment of say The Sharpshooter or The Marksman, with less focus on the goofy humor and more on the violence and sleaze.

Ross as we’ll recall is a veteran of both Korea and ‘Nam and just friggin’ loves to kill, so as the novel opens he’s chomping at the bit to take on whoever is behind the recent wave of cop killings going on across the country. Once again there’s the absurd element that the cops know that Ross is Hitman (no “the” in his title, by the way), yet somehow they don’t know where he lives and they don’t arrest him as soon as he steps foot inside a police department. One thing this volume picks up from the previous volume then is its pulpish tone, with Ross like a ‘70s equivalent of The Spider or some other ‘30s pulp hero.

The cop killers are an army of hippies, much like the one in Len Levinson’s The Terrorists. Ross gets lucky and comes across a few of them while they’re attempting to waste some cops, and he kills them all, thus discovering that they appear to be made up of mostly minorities and women; Ross surmises that this army is comprised, then, of anyone who’s ever “been hassled by the Man.” The women appear to work in cells of three and consider themselves Furies, no doubt part of the army to gain revenge for loved ones, brothers, or even sons who have been arrested or killed by the cops.

Author Kirby Carr (aka Kin Platt) also adds a bit of the occult movement that was so big in the early 1970s, with covens of witches and groups of satanists who are lead by an Anton LeVay type. Ross gradually deduces that the mob is controlling the leaders of these occult groups, having them exhort their masses to revolt against society while at the same time asking money from them, for the movement. In LA the groups are controlled by a mafioso named Tooey, but the tentacles spread across the US and Ross is certain there’s one man behind the entire thing.

Early chapters seem to build up this nationwide syndicate of satan worshippers and witches working against the government, but Carr sort of blows it. Instead Let Me Kill You, Sweetheart! becomes a repetitive ordeal where Ross stalks after a witch or some minor thug, beats them for info, then tries to find out who is in charge of them. The previous volume, despite being uncertain in tone, at least offered more fun, jumping all over the place. This installment just sort of plods along until it reaches a predictable end. Even promising material set up early in the novel, like the Furies, is quickly forgotten and never mentioned again.

In fact Carr page-fills with abandon at times, giving us lots of detail on witch practices, most of it likely gleaned from something published by Llewellyn Books. He also finds the time to throw in a budding relationship between a satan worshipper and a witch, both of whom are indentured speech-givers for Tooey (who himself works for a shadowy presence who calls himself De Groot). Ross himself takes back seat for long portions of the novel, and when he does appear his powers are so godlike that his victory is never in doubt.

Tension and thrills sort of evaporate as the novel settles into the same pace: Ross will find some Tooey stooge, beat the person up (in the event it’s a woman he will slap her around), make them call Tooey and say they’re going to quit, and then wait for Tooey’s goons, whom Ross is certain will be on their way posthaste. And once the goons arrive, Ross kills them all quickly and with ease. Indeed Ross seems to lack intelligence here, as despite the fact that he’s trying to track down who is behind this national cop-killing spree, he straight up just kills these guys instead of sparing one of them for interrogation!

Again Ross enjoys killing and fighting, but the ninja stuff of the previous volume is gone, as are the weapons Ross used last time out. Here he still deals mostly with handguns, from a Magnum revolver to a 9mm semi-automatic, and he also uses something called a Baby Ermma. At one point he uses a “burp gun,” but the action scenes are brief and are moreso Ross just blowing people away with little challenge. And the gore factor is there but nothing major; in fact a sort of blandness prevails over everything.

I said earlier that the corny element was toned down this time, and for the most part that’s true. But there’s still goofy stuff, like a nonsensical scene where Ross goes back to a building from which mobsters were operating, only to find a naked porn actress there who thinks this is the location of a new film and wonders if Ross is doing the scene with her! Once the punchline finally arrives it turns out the girl has the wrong address…but it’s just too goofy to be funny. And speaking of which Ross doesn’t see any bedroom action in this volume, a far cry from the last one, where he strangled a woman while he had sex with her. That being said Carr offers up lots of sleazy stuff, in particular the under-the-desk duties Tooey expects of his secretary.

Also the supernatural element from the previous volume is gone, only hinted at by the characters. The witches speak of demons as if they really exist, and Ross wonders often if they actually do. But unlike the last time where he met vampires, Ross only squares off against regular humans here, and in fact the entire occult conspiracy deal fizzles out into a Scooby-Doo sort of reveal where it’s just some regular schmoe behind the various hippie terrorist factions…actually a loser who poses no threat at all to Ross.

Carr’s writing reminds me of a combo of Russell Smith and Dean Ballenger; Smith because Carr writes with little regard to the rules of reality or common sense, and Ballenger due to the goofy banter he creates for his mobster characters. However Carr lacks the graphic gore of either author, though his action scenes are reminiscent of Smith’s in that there’s not much “action” at play, with Ross basically murdering his opponents with one skilled shot before they’re able to even fire at him. Ross is also a bit too superhuman, able to defeat several men at once with his bare hands and never being concerned about danger or death – but then this only gives the series more of a “modern pulp” feel.

Well, I actually have the full run of the Hitman series, which is quite a feat as some of these books are absurdly obscure and overpriced, in particular the fourth and fifth volumes. They each have lurid titles and covers, but so far there’s been little meat between the pages to back them up (let alone the overblown prices), so let’s hope things improve soon.
Posted by Joe Kenney at 6:30 AM

So many of these series I missed back then, I know I'll never catch up on them now, but your reviews continue to inspire me to search them out. Sigh. Right now I'm reading Modesty Blaise, Trace, Digger, and Destroyer, and having a wonderful time (g). So glad I found your Site and can learn about these old series.

Tom, thanks for the comment, and I'm really glad to hear you are enjoying the books you are tracking down. I'm not familiar with Digger, so I'll look into that one. Lately I've been on a pulp WWII kick, so have been reading some old men's magazines. They're a lot of fun, with pulpy titles and plots, and you can see how they were sort of the prototypes for what later became men's adventure novels.