The Vigilante #1: New York: An Eye For An Eye 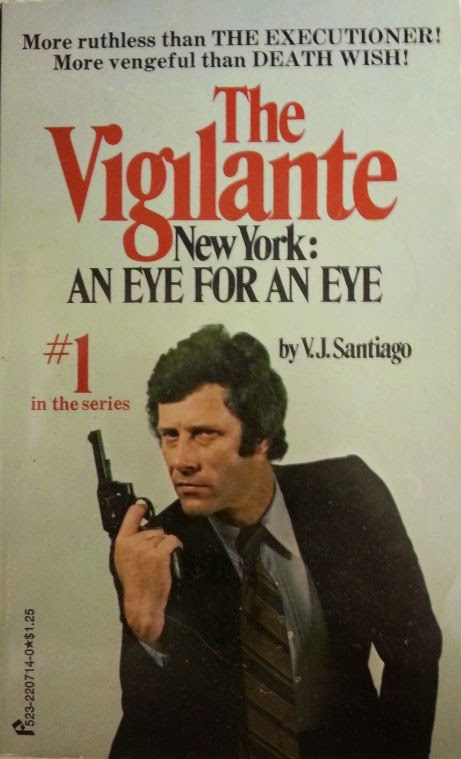 How could you not want to read something that’s “More vengeful than Death Wish!?” Starting off a six-volume series copyright book packager Lyle Kenyon Engel, An Eye For An Eye serves as the origin story for Joe “The Vigilante” Madden, and for the most part comes off like a less sadistic take on Bronson: Blind Rage. “V.J. Santiago” is our good friend Robert Lory.

This is not an action-packed tale, and Lory goes for the same sort of introspective tone as Jon Messman in the Revenger series, documenting in detail how a 44 year-old New Yorker goes from a happily-married professional engineer to a gun-toting vigilante in just a few short days. To do so Lory first takes us through an average day for Madden, who we learn is a regular kind of guy, a veteran of the Korean War who now works for a well-respected engineering corporation based in New York.

After dealing with the Grossman brothers, a pair of clients flown in from Los Angeles who make the obnoxious and demanding clients in Bewitched seem kind, Madden goes out with his wife, Sara. Lory pulls an unusual move here, by having the couple only have been married for three months. This is Madden’s second marriage, his first ending in divorce, and Sara, a fashion designer, is still in her 20s. Anyway I say it’s unusual because you know something’s about to happen to Sara, but at the same time you wonder why Lory didn’t give them more of a history together – I mean, three months? I’ve got underwear older than that. (Wait, wrong joke.)

After visiting Sara’s sister and brother-in-law at their home well into the night, Madden and Sara hop a train back to Manhattan. But it’s nighttime, the time of “the animals,” as Madden soon thinks of them; the novel is redolent with the crime-ridden vibe of the era, with the city practically a ghost town as soon as the sun sets, with armed criminals crawling out of the sewers like veritable C.H.U.D.s. And they are all minorities, with An Eye For An Eye coming off like Army Of Devils and Hijacking Manhattan.

Four black youths accost the couple on the subway, and as Madden tries to fight one of them off, another comes in and starts knifing Sara. Lory never lets us know precisely what the poor lady endures, but when Madden comes to, having been knocked out, she’s dead and her face has been mutilated. Lory very well captures the ensuing numbed shock and disbelief that grips Madden as he tries to understand what his life will be like now that his wife is no longer there to share it with him.

No doubt it’s this part of the story that made Lory only have the two married for a few months, as it seems just enough time for it to be believable that Madden undergoes his transformation into a vigilante; had they been married longer, like a decade or so, it would be easy to imagine Madden becoming a catatonic wreck, too engulfed in grief to do much of anything – and also, importantly, there’d likely be kids by that point. Madden and Sara had no children, so again Madden has no concerns on that front when, as his grief slowly lessens, he finds himself more enraged at “the animals.”

After forging a sort of bond with Sergeant Joe Delancy of the NYPD, a cop whose own fiance was murdered years before, Madden also deals with Sara’s sister, who rightly questions where Madden gets off on making important decisions about Sara’s funeral and etc, given how short of a time Madden even knew her. Meanwhile Madden gets drunker and drunker, culminating in a night, just two days after Sara’s murder, where he stumbles out into the city again. This time he’s mugged and slashed by a knife, which leaves a jagged scar running across his face. And they steal his wedding ring! Clearly the guy’s not having a good week.

Madden lays off the drinks and prepares himself for a night of payback. He looks for weapons in his apartment, deciding at great length on a butcher knife. He even devises a Travis Bickle-style holster for it, which he hides in his jacket arm. Lory again keeps it all realistic, with Madden playing it up as a simpering drunk to attract his prey. And he finds them; first he knifes one would-be mugger to death, then the next night, while hunting in the subways, he kills a black mugger who pulls a .38 revolver on him. Only after killing the guy does Madden realize he’s just been handed a gift, and rushes back to retrieve the gun, which he almost threw away.

Now armed with a .38, which he supplies with ammo through various underworld contacts (finding out how to do such things via sly questions to Sgt. Delancy), Madden is truly prepared to dish out some payback. Only here in the homestretch does the action really ramp up, with a trenchcoated Joe Madden lurking about the most dangerous areas of nighttime New York, blowing away would-be rapists and muggers. He lives up to the cover slogans, too, just outright killing anyone he comes up against, no mercy given.

As mentioned above the novel really plays on the class and race divide; when Madden refers to “the animals,” nine times out of ten he’s referring to blacks. He also relishes the fact that the New Yorkers of the daylight are “smarter than the animals,” and it seems pretty clear that here too he has race in mind. His hate becomes all-encompassing; when Sara’s sister implores Madden to consider giving Sara’s clothes to goodwill instead of incinerating them, Madden refuses, adamant that “they” will never get anything of Sara’s. In his hate he now lumps all underprivileged into the same category, “the animals,” and it’s a very unsettling moment.

The highlight of the novel comes at the very end, with Madden stalking Central Park. Lory opens the section from the perspective of a young black girl who rushes, despite the danger, through the Park to get to a college lecture. She is attacked by four black youths who openly discuss raping and killing her; the fourth youth, a girl, announces that she too will take part in the rape! Madden arrives on the scene just in time, .38 blasting, and again shows no mercy. In fact, Lory makes it clear that he starts to enjoy his work, and one could easily read the novel and come away with the impression that Madden himself is one of “the animals.”

The key to enjoying An Eye For An Eye is not to approach it as a pulp crime novel like The Sharpshooter or The Marksman, but moreso as a “regular” sort of novel, one that was just packaged as a Pinnacle paperback with a photo cover of some dude with a gun. Lory never once descends into pulp and treats everything seriously, and my guess is the novel must be close to Brian Garfield’s original Death Wish in this regard – I’m not sure, because I’ve never read the novel, and the first Death Wish film is the only one of the series I’ve never seen, though it’s probably the best.

The novel, despite the introspective tone, moves at a fast pace, at least so far as events in Madden’s world go. An Eye For An Eye occurs over a single week, with Madden prepared to fly to Los Angeles (to handle the Grossman brothers account) in the end – the owner of his company insists that Madden will “feel better” if he gets back to work, and Madden agrees. Personally I think that’s one callous company, but at any rate it serves to move us on to the next installment, where Madden continues his vigilante war in LA.

In his 2007 interview with Justin Marriott in The Paperback Fanatic #4, Lory related the very funny story of how he became “V.J. Santiago:”

About the pen name: Pinnacle wanted one because the Robert Lory name was associated with vampires and such. I was still thinking about one after I’d sent the manuscript to Lyle. One afternoon my office telephone rings and it’s someone asking for V.J. Santiago. Wrong number, I say. “No, right number, Bob,” Lyle says, taking his handkerchief from his phone. Why V.J. Santiago, I ask. Answer: “The publisher figured that because you’re knocking off so many ethnics, you’d better be one.”
Posted by Joe Kenney at 6:30 AM

It's funny to read that he gets his ammunition through various underworld contact." That's such a switch from all those vigilante characters who are at war with the underworld itself.

Just read Garfield's novel last week, actually. And you are absolutely right. It's a serious novel of one man's evolution from liberalism to vigilantism. Lots of inner dialogue detailing his changing opinions of the NYC underclass - and, when news of his exploits hits the tabloids, Garfield outlines the gamut of public responses to his violent actions.

Yeah, it's funny and sad at the same time that DEATH WISH is the progenitor of the "soft-hearted liberal white-collar guy goes on a vigilante rampage", and yet, it offers what's probably one of the most down-to-earth, well thought out, and dare I even say it, "realistic" portrayals of the genre.

Like Robert E. Howard's Conan the Cimmerian, I feel like the film version of the DEATH WISH story has become the basis for its successors, rather than the novel itself.