Deadlier Than The Male (Jana Blake #1) 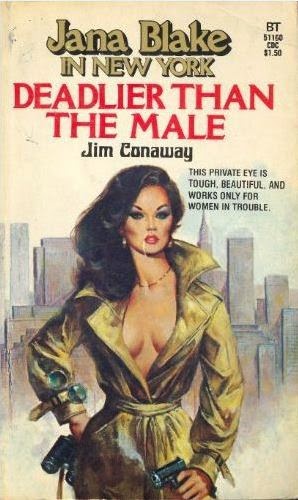 Deadlier Than The Male, by Jim Conaway
No month stated, 1977  Belmont-Tower Books

J.C. Conaway returns as “Jim” for the first of a two-volume series that comes off like a female-fronted equivalent of Conaway’s earlier Shannon series. Our hero is Jana Blake, a hotstuff blonde (despite the brunette on the cover – and Jana doesn’t wear a trenchcoat or carry a gun, by the way) who lives in Greenwich Village and works as a private investigator who only helps women.

An “ardent feminist who likes men,” per the back cover copy, Jana is apparently new to the world of private investigation, and is waiting for her big case. She lives on the second floor of a Greenwich flophouse, the first floor of which is a leather and chains store that caters to gays, with a gym across the hall from Jana’s apartment and a porn film production company on the third floor! And Jana’s constantly afraid her landlord will discover that she’s actually living here, with a Murphy bed hidden in one of the walls – her lease only calls for her to office out of the room, not live in it fulltime.

Deadlier Than The Male takes place during a very hot New York summer, and opens with the first of a few lurid murders, as a good-looking woman, dressed as a nun, stalks some random middle-age guy from the subway and murders him, unseen by anyone, in the entrance of his swank penthouse. Then she chops off his head and takes it with her, leaving no fingerprints. The woman is of course the novel’s villain, a complete basketcase with one of the most miserable childhoods I’ve ever read in a trash novel.

Interestingly, her first victim is very much like Patrick Shannon himself – we read that he lived in a “sensuous” type of pad with a mirrored ceiling in his opulent bedroom, and was known for courting many ladies. The second murder is even more along the swank lines, as the lady makes her kill in a disco club called Narcissus, and Conaway really goes to town describing the garish, swanky place, with lucite furniture, glowing lights, an entrance that is designed to look like female genitalia, and private “conversation rooms” on the upper floor where couples can go to “talk.”

Once again our villain murders a middle-aged guy who is popular with the ladies, coming on to him and then following him into the restroom – he’s sick from too many drinks – and chopping off his head. A later murder sees her further playing up on her apparent sex appeal, calling up another middle-aged guy and talking her way up into his bedroom, where she has him strip down…and then chops off his head. Like the other two, she makes off with the guy’s head.

The cops are baffled, and Gil Lanahan, the detective working the case, insists they’re all random murders. Jana, following the case in the papers, suspects otherwise. When she’s hired by the mother of the first murdered victim, she promptly follows her hunch and researches the man’s background. This leads her to a private college on Staten Island which the guy attended twenty years before, in 1956 – and Jana soon discovers that the other two victims attended there at the same time, and that they were all friends.

Her alarm bells are set off by the creepy old “house mother” who oversees the fraternity house the three men once lived in; the lady first professes not to remember them, but as she goes on she starts to say the three were like “sons” to her. Jana also notices a photo with the three victims, taken in 1956, with their arms around two other guys – surely, if the murders are connected, these two will be next on the list.

Meanwhile Jana’s busy getting laid by her studly Italian boyfriend (who runs a fruit stand across the street from her apartment!) and, of course, by Detective Lanahan. Conaway serves up some explicit sequences here, but rarely does he write them from Jana’s perspective, as per usual he POV-hops throughout the novel. And also as per usual he maintains a lurid, sleazy vibe through the novel, often cutting over to the nameless murderer's viewpoint while she’s pleasuring herself.

Conaway also must’ve had a thing for off-Broadway plays, as each novel I’ve yet read by him has either featured theater actors or the protagonists going to a play. This time Jana and her gay best friend go to see a “rock musical” based on Oedipus Rex titled “Mother Fucker” (later changed to “Mother Lover”) which turns out to be performed mostly by transvestites. Conaway doesn’t provide a long sequence detailing the play, like he did in Shannon #3, but it’s certainly memorable enough, and also a lyric in one of the songs gives Jana the idea that whatever is causing these present murders had its beginnings in the past.

Gradually we learn that our nameless murderer was, as a sixteen year-old, raped by these five college boys, all of whom were spoiled, troublemaking offspring of millionaires. We also learn her sad backstory, how her mother (whose surprise reveal is easily seen coming) completely ignored her, and even used her horrible raping as a way to get some money for herself. Jana deduces all of this from basically looking at photos and asking questions; there are no wild shootouts or in fact any action scenes in the entire novel.

So then Deadlier Than The Male is about on par with everything else I’ve read by J.C. Conaway, with a definite sleaze factor at play and a goofy feeling to the entire proceedings. However Jana is more likable than Patrick Shannon, a good-natured bombshell who wants to make her mark as a private investigator. She only had one more shot at it, though, with the second volume, They Do It With Mirrors, being the last one in the series.
Posted by Joe Kenney at 6:30 AM

When I was with the NYPD I worked with a lady detective who looked just like this. No foolin'!

Now that's a cover! I'd buy that book just for the cover art. (In fact, I just did). I wish it more fully represented what's inside the book, though. Still, it sounds like it'll be worth checking out.

Ironically, I went to grammar school with a guy named Patrick Shannon. He was pretty much of a douche for a 10-year-old...

These books are expensive in abe books.

I read somewhere that two people in show business really DID plan to make a comical version of Oedipus Rex by the title this story mentions, even though it never got made. Oddly enough, the two men were William Conrad and Paul Frees! Again, that's what I read.