The Hook #1: The Gilded Canary 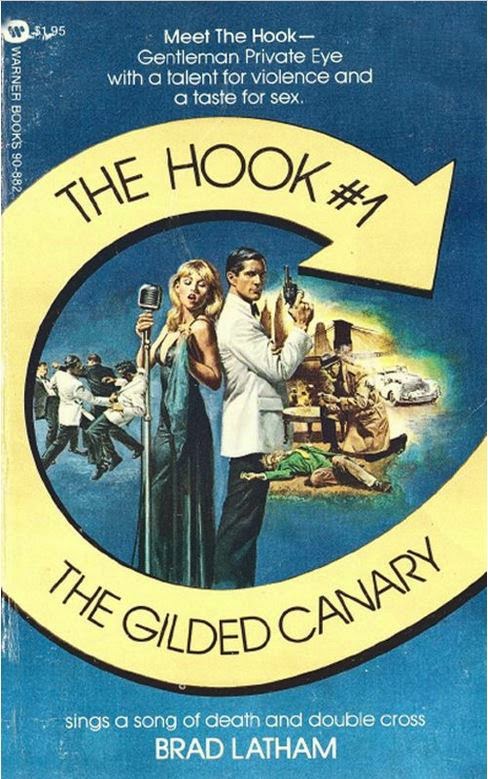 Part of Warner’s short-lived Men Of Action line, The Hook ran for five volumes, and was unlike the other series in the line (ie Ninja Master) in that it was a period piece about an insurance investigator. If this first volume is any indication, The Hook has more in common with the hardboiled pulp of the 1930s, only with much more explicit sex. Seriously, this novel is so sex-focused that the first-page blurb is a sex scene.

The series is set in 1938, and Brad Latham (apparently in reality David Schow) really captures the period detail. Not only does he grace his colorful set of characters with dialog that appears to come right of a Bogart movie, but he also gives them equally-colorful names: Muffy Dearborn, Two-Scar Toomey, Jock Bunche, Jabber-Jabber Jacoby, Stymie the Fence, Jimbo Brannigan, etc. But while the dialog, names, and period details are colorful, plotwise the novel isn’t all that much.

Our hero, William “The Hook” Lockwood, works as an insurance investigator for Transatlantic Underwriters, and is currently tasked with locating torch singer Muffy Dearborn’s reportedly-stolen diamonds, which are worth fifty thousand dollars. Lockwood (we’ll just go ahead and assume he’s the uncle of Hugh Lockwood, one of the protagonists of Search) got his nickname from his boxing career; he’s 38, and fought in WWI. Now he solves the big cases for Transatlantic, rolling around New York City in a supercharged Cord.

Lockwood’s already on the case as the novel opens, heading into a Manhattan nightclub to catch Muffy Dearborn’s debut performance. The story of her jewels being stolen was leaked into the papers via Walter Winchell’s gossip column, and Lockwood has a hunch the story was leaked on purpose. He’s sure there’s more to the case than a simple theft. A plethora of lowlifes have assembled for the performance, and Schow introduces us to our entire cast, all of whom are conveniently gathered here in the opening pages.

Jock Bunche, Muffy’s awesomely-named former paramour, starts catcalling her during her opening number, and a huge fight breaks out. Here Lockwood unleashes some of his boxing skills, though he’s no superhuman. He gets some help from Raff Spencer, a hulking dandy who speaks with an affected British accent despite being American, and a WWI vet himself; he’s Muffy’s current paramour. Lockwood also runs afoul of Two-Scar Toomey, so named due to the scar running across his face, and the gangster boss goes to the top of his suspects list.

Lockwood’s detecting skills are pretty lame; he spends the entire novel just sort of wandering around New York, chasing one wild goose after another. Schow peppers the novel with several action scenes, many of them much overdone, in particular an endless, endless sequence midway through in which Lockwood is hauled off by a group of Toomey’s men and is able to talk them into a boxing match. A desperate Lockwood, unarmed and riding with the men who plan to kill him, suspects this is his only chance to live, but what could be a taut scene goes on way too long, with Lockwood getting beaten nearly as much as he gives the beatings. To make it all worse, the entire scene is rendered moot when Raff conveniently shows up to save him.

Otherwise we have car chases, like one Lockwood gets in early in the book, as well as a handful of gun fights. Lockwood also has no compunction about blowing people away, and Schow goes for the right approach with not having Lockwood bound by any laws. He has a friendly rapport with titan-sized Jimbo Brannigan, tough beat cop who runs this part of the city, and Brannigan usually just shows up in the aftermath of Lockwood’s latest fight and makes a joke. Brannigan also shows up to save Lockwood several times; our hero is actually saved from certain death several times in the novel.

While it’s all pretty mundane, despite the colorful setting and character names, one thing that separates The Gilded Canary from its peers is the ramped-up sex scenes. If this first volume is any indication, The Hook is one of the most sexually-explicit men’s adventure series ever, with Lockwood getting it on in super-graphic detail with Stephanie, Muffy Dearborn’s hotstuff French maid, as well as, expectedly, Muffy herself, who you won’t be surprised to know is a blonde goddess among women. The first-page blurb is just a hint of what’s in store for the reader: 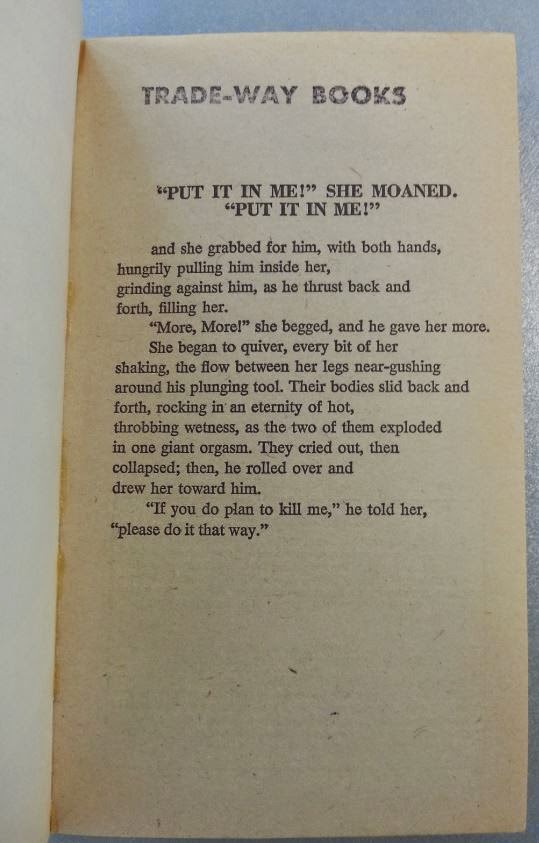 Stephanie comes into it in what amounts to a shoehorning into the narrative, just showing up at Lockwood’s doorstep and telling her she’s moving in with him to “protect” him. Her hazy story has it that she once knew a man similar to Lockwood, back in France, and he ended up dead, and Stephanie now feels something certain is about to happen to Lockwood unless she’s there to watch him. It’s all obviously bullshit, but Lockwood lets her move in and decides to keep an eye on her, even though he knows she’s no doubt up to something.

The plot, concerning Muffy’s missing jewels, is itself kind of bland, and you wish there had been a more fantastic or at least memorable storyline for this first volume. But somehow Lockwood runs into an assortment of mobsters in his investigation, most notably Widwer “One-Eye” Levinsky, who wears a glass eye and puts Lockwood temporarily in the hospital early in the book, ambushing him and beating him unmerciful, as the Jerky Boys would say.

Muffy herself is a talentless shrew who worries more over her public image and who treats everyone with disdain, particularly Lockwood; that is, until she decides to become interested in him. Schow does a pretty good job of presenting Muffy as a calculating harpy with no redeeming features, and when Lockwood has the expected sex scene with her he at least has the dignity to be ashamed with himself. Mostly because he’s certain she had something to do with the theft.

In a scheme that turns out to be as overly-complicated as the one in Trouble Is My Business, Lockwood finally deduces who was behind the theft. It’s so complicated that, like a regular Banacek, Lockwood has to deliver expository dialog explaining it all for around twenty pages or so while everyone sits around and gapes at his intelligence. Schow does end it all with a bang, though, with the outed villains getting the jump on Lockwood, leading into a final-pages gunfight.

But still, the novel is just sluggish, and took longer to read than it should’ve. The mystery is too mundane to justify the book’s length, and there are too many instances in which Lockwood just stands around and wonders what lead to follow next. But then, this is just the first volume, so it could just be a temporary misfire before Schow finds his footing with the next four volumes.
Posted by Joe Kenney at 6:30 AM

Your review is spot-on. I bought this because of the connection with Schow and was a bit disappointed. Very pedestrian story, at times too slow. The sex scenes were quite explicit for the time and this kind of novel. Normally I would say this is a good thing, but here it was slightly bizarre, as it clashed with the tone of the story.

I see that the #5 is re-published as a Kindle, but only the #5. An indication that this was another writer?

Wow that was trashy, LOL. Thanks, neato site too.

Didn't realize this was Schow. Didn't like this book either.

Thanks for the comments, everyone. Andy, I think all 5 of the books are still available as Kindle editions: http://www.amazon.com/s/ref=nb_sb_noss?url=search-alias%3Ddigital-text&field-keywords=hook+latham

But yeah, the explicit sex scenes did clash with the tone of the novel...thumbing through the next installments, it looks like the sex scenes only get more explicit!

I've been curious about this series but never quite enough to seek any of them out. Now that I know it's Schow I may have to think about it... but, now that I know it's not that great, I'll still have to re-think it the other way. So, basically I guess I'm back where I started from, just better informed. :) Great review, as always.

I'm reading one of Schow's horror novels right now -- The Shaft -- and it's not bad except all he seems to want to write about is cocaine. There are endless descriptions of what different grades of cocaine look like, what different effects they have, the entire lifestyle that rotates around cocaine, etc. Just when you think he's done with the cocaine obsessing, some new character will be introduced to it and it all starts all over again. You know how obnoxious the gun-porn can get in, like, a Jerry Ahern novel? Well, imagine that done with cocaine. All this would be fine if the plot was actually about the drug trade, but unless something changes vastly in the last hundred pages, it's about some kind of gooshy carnivorous monster living in the air shaft of a rundown apartment building. Or, it would be, if Schow found time amidst all the cocaine to actually deal with that. It's definitely splattery enough, and there's a lot of pretty graphic sex, too, but if they'd take out all the drugs it wouldn't have to be a slowly-paced 350-page-small-print book. It even began life as a short story, and I'm betting I know what at least 80% of the added material was...

He'll also do gun-porn (Gun Work, from Hard Case Crime, was so of the most over-the-top gun-worship I ever read) and has other weird obsessions, like people with missing fingers. That shows up over and over...

Zwolf, great to hear from you. Thanks for the info on the Shaft...despite it all it sounds weird enough to be worth checking out sometime. I enjoyed your review of Gun Work in that great Hard Case Crime round-up post you did on your blog...that one for sure I think I'll read someday. Also that's crazy about the "missing fingers" fetish...can't recall anyone missing those in The Gilded Canary, but there was a dude who was missing an eye.

Hi. I'm the one who first proposed to Allen Hubin (almost 20 years ago) that Latham was a likely candidate for the 5-book series that Schow wrote. I soon after discovered that 3 of the Latham books were, in fact, written by Richard O'Brien (author of a horror novel titled Evil, among other things). Schow didn't write any of these. O'Brien wrote numbers 1, 3, and 5.

Funny! I just now saw the comment left by Schow - who is one of my very favorite writers. Believe him!

Thanks for the comment, Darren! You inspired me to finally get back to the series. I just finished the third volume and I see you are correct -- it is definitely similar to the first volume, and nothing like the second one. I wonder who the other author on the series was? And thanks also to David Schow for the post -- sorry I failed to respond to it sooner!