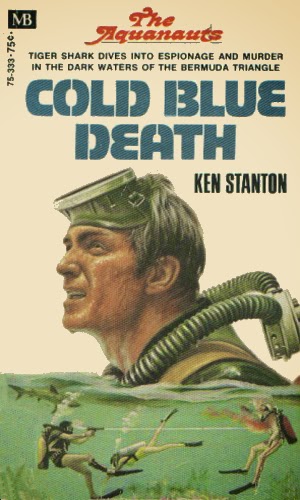 The Aquanauts ran for 11 volumes between two publishers (going over to Manor when MacFadden Books went out of business) and was yet another series copyright book packager Lyle Kenyon Engel. “Ken Stanton” throughout the run was Manning Lee Stokes, who at the time was also working for Engel on the Richard Blade and Killmaster series.

Unfortunately, Cold Blue Death is not an auspicious beginning for the series. Stokes, for whatever reason, takes a novel about an “aquanaut” code named Tiger Shark, who is graced with a high-tech personal submarine and various other gadgets and gear, a plot concerning the Bermuda Triangle and its mysterious history, and underwater nuclear missile sites…and turns in a very slow-moving murder mystery that doesn’t make use of any of the above elements.

The novel is also long: 208 pages of some of the smallest print I’ve yet seen in the men’s adventure genre. The book is more likely around 300 pages, and let me tell you, those pages don’t speed by. There’s barely any white space or dialog, Stokes as usual doling out most of the tale via huge blocks of paragraphs. To clarify, I do enjoy Stokes’s writing – and Cold Blue Death is clearly the work of Stokes – but his constant stalling and reluctance to have his characters do anything can get to be a drag. Yet for all that I can’t say I didn’t enjoy the novel; I just wish it had been more memorable.

At any rate Cold Blue Death, which takes place in January 1969, introduces us to our hero, William Martin, a 30 year-old aquanaut who was raised in a foster home, used his great mind to get him into the best colleges, but instead went into the Navy where he became an expert frogman in ‘Nam. Now he is a “Shark” in the newly-formed Secret Underwater Service, but in this novel Martin is promoted to the level of “Tiger Shark,” the only such one in the SUS, reporting only to a Vice-Admiral and a commander of the Vice-Admiral’s choosing.

The commander turns out to be Tom Greene, a 45 year-old Navy career man who lives comfortably with his wife and figures he’ll be a desk soldier for life. Stokes really fills the novel with Navy details, with all of the regulations and etc of military life, and this in a way separates the series from the “lone wolf” protagonists that would become the mainstays of the men’s adventure genre later in the ‘70s. It’s also a big demerit so far as our hero goes, as he’s constantly worrying about getting reamed out by his superiors and only does what he’s ordered to do.

Stokes does add a comic book feel to the series when Martin officially begins his mission; from there on out he is only referred to as “Tiger Shark,” “The Tiger,” or just “Tiger” in the narrative, as if he has become a superhero, or at least a G.I. Joe character. There’s also a definite similarity to the later (and much superior) John Eagle Expeditor series, with Tiger Shark graced with a high-tech submarine (KRAB – Kraft’s Reconnaissance and Base) that’s outfitted with weapons and can turn itself invisible beneath the sea thanks to chameleon properties. Tiger also has a fancy gun, the Sea Pistol, which is similar to John Eagle’s dart gun but fires underwater; Stokes even uses the exact same sentence to describe it as he would later use to describe Eagle’s gun in Needles Of Death: “The Sea Pistol resembled an oversize Luger.”

Unsurprisingly, the book’s tone is also very similar to John Eagle Expeditor, if only a bit saltier, with a lot more cursing and colorful language than in the Expeditor books. I’ve noticed that people rarely if ever curse in the Expeditor series, but Stokes peppers Cold Blue Death with all manner of filthy language that almost made me put down the book and pray. Just kidding. So far as the good stuff goes, ie the sex and violence, Expeditor would outrank this series on that front, with Stokes providing a lot of buildup but fading to black on the novel’s one and only sex scene, and the violence is limited to a few brief fights in the final pages.

Anyway, Tiger is very gradually called onto the scene, such as it is, by Vice-Admiral Hank Coffin, an old Navy career man who is best friends with the Chief of Naval Operations for the military – the CNO being the guy who both created SUS and brought on Martin as the first Tiger Shark. Coffin and Commander Greene explain the situation: an SUS Shark named Joe Barry recently died in what was described to the press as an accident. However Barry was really murdered, and he was killed while performing the top secret project of marking areas in the Bermuda Triangle that could be turned into underwater nuclear missile sites. Tiger Shark’s mission is to find out who killed Barry, and if the top secret nature of his work was uncovered.

It’s really not the most compelling of plots, and Stokes does himself no favors by not adding much tension, suspense, or action. He spends most time detailing the Merman, a big liner that is owned by Paul Zamora, an uber-wealthy Onassis type who is known as “Toad” to his friends. The ship has been trolling the waters in the Bermuda Triangle near where Barry’s corpse was discovered, and Tiger instantly sets his sights on it, especially when, in his first trip out on KRAB, he spots a spectacular redhead scuba diving while fully nude; he shadows her, unseen, and watches as she swims up to Merman. This turns out to be Zamora’s latest acquisition, internationally famous jet-setting beauty Morga Hedlund.

Also onboard is another hotstuff female: Peg Taylor, a brilliant-minded aquatic researcher who, we learn after a laborious amount of narrative, was having an affair with Joe Barry…and killed him. Why? Because Barry and she had discovered a wrecked ship from the 18th century that was carrying a large amount of silver coins. When Barry told Peg his desire to come forward with the discovery – and marry Peg – she lost her mind and killed him in a particularly brutal way, strangling him with a steel wire as they were scuba diving by the sunken ship. In other words, Barry’s murder has nothing whatsoever to do with his top secret mission, and thus Cold Blue Death is more of a murder mystery than an action-adventure story.

But it just kind of goes on and on, and your enjoyment will be dependent upon your enjoyment of Stokes’s particular style. Personally I do enjoy his style, and I enjoyed reading the book, but I have to admit it was certainly lacking a whole bunch of things. Not helping matters is that Tiger is sort of a screwup, at least this time out, blowing his mission a handful of times due to his rash actions. He even manages to get himself caught late in the novel. Personality wise he’s very much along the lines of John Eagle, only without the Apache background and more of a “military man” mindset; he doesn’t talk much in the novel, and stays focused on his mission throughout.

Stokes does have a bit of fun when he gives Tiger the in-joke undercover name “Lee Manning;” Tiger uses this cover when he leaves KRAB and goes to Charlotte Amalie, a town in this part of the Bermuda Triangle where Morga will go to blow thousands of dollars a night, towing Peg along with her. Tiger manages to crash their private party and royally turn on Morga. Even though Stokes fades to black in the inevitable sex scene, he holds true to the “salty” feel of the novel with Morga delivering some humdinger lines, practically telling Tiger she’s about to screw him. Meanwhile Peg fumes, knowing that this stranger is the man who recently surprised her while she was scuba diving beneath Merman; yet another instance of Tiger almost blowing his mission, as for no reason he attempts to spook Peg…who almost kills him, instantly slashing his breathing hoses.

It’s not until the very final pages that Tiger does much of anything. Finally given clearance to take over Merman, he sneaks onto the ship, armed only with a .38 revolver (it seems his fancy gadgetry is limited to underwater items), and promptly gets caught! This, other than a brief bit where Tiger kills a guy on the ocean floor with his Sea Pistol, is the novel’s only action sequence. In a scene that reminded me somehow of Lethal Weapon, Tiger is handcuffed to a ceiling pipe and uses his wits and savagery to break free. Meanwhile Morga’s strung out on LSD, nude and covered in psychedelic bodypaint, though Stokes only provides us with this image and doesn’t do much else with it. Even Peg Taylor’s fate is left off the page, which is a shame, as Stokes has built her up to be so manipulative and murderous that you want to see her get her just desserts.

While it wasn’t the greatest first installment for a series, Cold Blue Death was still somewhat enjoyable at times, mostly because it came off like a trial run for the later John Eagle Expeditor books. And it was entertaining enough that I’ll keep reading the series; here’s hoping though that it improves.
Posted by Joe Kenney at 6:30 AM

I was surprised to see I've read only one of these, because I know I have others:

Weird that it's called The Aquanauts, but there's only one aquanaut.

I'm surprised to read that Peg's fate is left up in the air, but also a little glad. Even though I know they're great fun to a lot of people, I get so tired of those female hero / female villain showdown scenes, partly because (unlike a lot of other traditions) I can see them coming from a mile away! So the moment I saw that it had a heroine and a villainess, I expected such a scene. So the fact that they left that out is awfully surprising (though that kind of scene might have been a little less of a cliché in 1970 than it became along the way).

I just found a copy of this one, but it is called Tigershark #1. Cover here; no mention of The Aquanauts.)

That's a nice find, Allan...I think I only have one or two of those Tigersharks. When MacFadden books went out of biz and Manor Books took over the series, they reprinted some of them under the series title "Tigershark," while at the same time reprinting (the same books!) as "The Aquanauts." There were only a few volumes bearing the "Tigershark" series title, I believe, so it must've been some early '70s attempt at an A/B test.