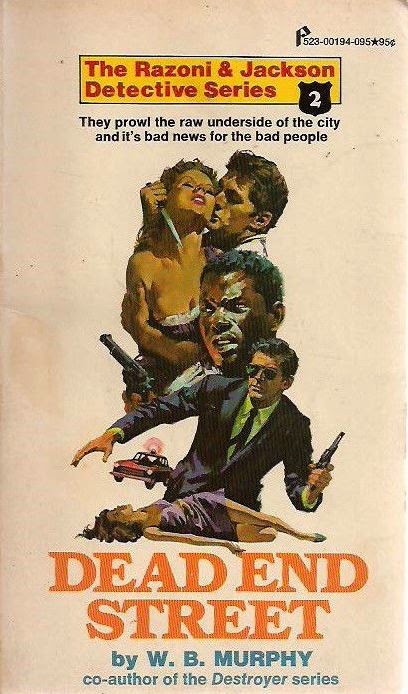 As if he wasn’t busy enough co-writing The Destroyer, in the early ‘70s Warren Murphy also turned out this five-volume series that is now most remembered for providing the inspiration for the Lethal Weapon movies; screenwriter Shane Black even gave Murphy official acknowledgement for this, requesting that Murphy be hired to help write the script for Lethal Weapon 2.

Given this, you’d expect Razoni & Jackson to be an action-comedy like Lethal Weapon. However, the series, if this second volume is any indication, is more of a mystery, with barely any action at all; heroes Ed Razoni and William “Tough” Jackson don’t even fire their guns once in Dead End Street, and the most we get for an action scene is a quick scuffle Razoni has with a pimp.

But from what little I’ve read of Murphy’s work, he doesn’t go much for the action stuff; his skill is more with dialog, and it’s here where you can clearly see the Lethal Weapon similarities – not to mention the fact that white Razoni is a young, loose cannon and black Jackson is an older family man. But even this isn’t exactly the same as Lethal Weapon, as Jackson is clearly stated as being bigger and tougher than Razoni, and you can’t help but picture Jim “Slaughter” Brown the way Murphy describes him.

Our heroes bicker and banter throughout Dead End Street, just like Remo and Chiun bicker and banter, and it’s all just as humorous. Another big difference from the Lethal Weapon films is that these two know no boundaries in their bantering, with race usually playing a big element. In his brief mention of the Razoni & Jackson series in his interview with Justin Marriott in The Paperback Fanatic #15, Murphy stated that if anything he was thinking of Robert Culp and Bill Cosby’s relationship in I Spy, and that’s easy to see when reading the books, though again with a bit more racial baiting (usually on Razoni’s part, making fun of Jackson’s attempts at growing an afro).

The plot of this second volume (the first is too grossly overpriced to track down) has our heroes tasked with finding out who has been murdering hookers in Times Square. The novel opens with the cops discovering the third murdered hooker in just a few months: Patsy Parris, who worked a certain area of “The Street” (as Murphy always refers to it – so I’m guessing it’s either Broadway or 42nd Street?) with all of the other hookers. Patsy’s death is not described, we just know that after working her shift until 4AM she’s offered a ride home by a friendly face, and the next chapter we’re informed the cops have found her corpse.

Razoni and Jackson, who are busy busting a corrupt cop who’s selling drugs, are called in by their gruff superior, Captain Marvin Mannion. Our heroes are the sole members of the Special Squad, meaning they get all the “special” jobs. Razoni wonders why the city cares that a bunch of hookers are getting killed, but Mannion reminds him that they’re good for the city’s economy. Not only do city officials want this killer found, they also want the hooker murders kept out of the press; they’re hoping Razoni and Jackson will be able to use all of the other hookers out there as killer bait.

The three dead hookers did not know one another, and the only thing linking them was that they were each platinum blondes from the south. Murphy keeps the mystery tightly knit, with only three characters introduced as possible suspects, all of them doing business on the Street and thus knowing most of the hookers: gruff Sgt. Rijenski, a beat cop; Tony Milller, owner and proprietor of a porn book shop; and Halligan, the sleazy night manager of a sleazy flophouse the hookers use for their appointments, usually giving Miller something free on the side for his allowing them to use the place.

Our heroes have no idea what to do, so they just sort of wander around the Street. Razoni goes undercover as a sailor, hanging out at the raucous Ship Ahoy Club; cue lots of funny banter about Razoni’s cheap sailor costume. Jackson meanwhile scopes out the place, standing around and waiting for Razoni to uncover something. Instead Razoni gets cozy with Lip Service, a hotstuff black hooker who comes on strong to Razoni, who insists that he never has to pay for it. And he doesn’t, as he’s currently got a thing going on with Pat, a gorgeous redhead who works for the paper as a researcher.

One thing that should be mentioned is that, for a novel about hookers and a serial killer, Dead End Street is not in the least bit sensationalistic, explicit, or even lurid. There isn’t a single sex scene (Razoni scores with both Pat and later on with Lip Service, and in both cases Murphy immediately fades to black), and the opening murder of Patsy Parris occurs “off camera” as well. There is no graphic content in the entire book. About the only thing outrageous about the novel is the salty dialog our heroes trade back and forth, which as mentioned can get pretty colorful at times (so to speak).

There also isn’t much sense of danger. Razoni’s only flashes of danger occur when he runs afoul of Lip Service’s suspicious-minded pimp, but even when the guy comes at him with a switchblade you aren’t concerned for Razoni, as the pimp is obviously out of his depth. Later Razoni also runs afoul of Hap Carburgh, a reporter who blew one of Razoni’s cases a few years before, outing his undercover sting in the papers. Now Hap is in New York trying to blow the lid off of the hooker-killings, which is something the New York officials don’t want to happen. Razoni ends up stealing the reporter’s car and destroying all of his film negatives.

As the novel proceeds it becomes pretty clear who the murderer is, but to Murphy’s credit he only has the heroes discover it due to police work and not flashes of inspiration or whatever. Meanwhile Pat has gotten herself in trouble, having gone undercover as a hooker as killer bait. She ends up encountering the man himself, and instantly becomes his latest source of fixation. The finale, while suspenseful, rings a bit hollow because the killer just sort of twiddles his thumbs after he’s cornered Pat, while Razoni and Jackson drive around Manhattan looking for him. But even here there’s no action, our heroes arriving just in time to slap cuffs on the guy and deliver a joke.

But here’s the thing -- Dead End Street was a lot of fun to read. Just as in the Destroyer books it’s the banter between the two lead characters that provides the most entertainment, and I’m happy I have the next three volumes to read.
Posted by Joe Kenney at 6:30 AM

I really enjoyed this series. Can't remember how many of them have, but I think all of them. I know I have the first one.

I can't remember offhand if I have any others in the series, but I have this one:

I thought the book played more like FREEBIE AND THE BEAN than LETHAL WEAPON, even though it was written before FREEBIE.

For me, these have more of a "Hickey & Boggs" flavor to them than "Lethal Weapon" or "I Spy."

Murphy did some very good novels. A lot of fun was also his Trace series, about a mostly drunken insurance investigator which was more comedy then straight P.I. novel.

Razoni & Jackson feature also in the sixth Trace novel Too old a Cat.

Thanks for the comments, everyone -- and August, "Hickey & Boggs" is one I've only recently seen, and you are correct, the novel does have that flavor to it. Great movie, too! (Really got a chuckle out of the part where the lady who went on to play Weezie Jefferson called Bill Cosby's character a "no good son of a bitch!")

Love most of the Murphy stuff as well as Sapir's novels. This series was hard to find back in the 80s when I was hunting thru the used book stores. Going to need to organize my library to see if I still have this series, but I had 3 or 4 out of the 5. Trace/Digger was better for the most part. The Razoni & Jackson stuff was cool cause they would first try to make the crime scene look like a suicide or both dead guys shot each other so they could close cases.