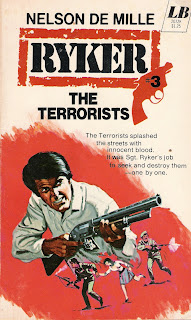 It bears his name, but this third volume of the Ryker series was not written by Nelson DeMille; it was actually written by Len Levinson. Len says it was a last-second job from his editor at Leisure, Peter McCurtin, and since the publisher owned the series rights they could hire anyone to write it.

It’s easy to see though that this is not the same author who gave us #2: The Hammer of God. For one, “hero” Ryker isn’t a full-bore bastard this time around, coming off more like your typical Levinson protagonist, and the narrative has that same down and dirty (yet still funny) vibe common of Levinson’s work.

I asked Len about his work on The Terrorists in my interview with him for The Paperback Fanatic #23. Here are his comments on it:

I wrote The Terrorists around the time that the Symbionese Liberation Army was in the news for kidnapping Patty Hearst. It also was around the time that some Weathermen made an error in their laboratory and blew up themselves and a townhouse in Greenwich Village, not far from where I lived on Christopher Street. Weathermen and their affiliates were shooting and killing police officers during those years, so I came to hate terrorism in all its self-righteous, hypocritical forms, and this attitude was expressed in the novel. Amazingly, some people nowadays consider Weatherman terrorists to be heroic figures and noble idealists.

There’s nothing heroic or noble about the SLA stand-ins in this novel; Len calls them the American Freedom Army, and they’re made up of inner-city youths who murder in the name of “democracy.” In fact they have more in common with the drug-created zombies of GH Frost’s Able Team #8: Army of Devils, rampaging through society with little concern for the police, blowing away “capitalists” with insane zeal. If you kill one, five more rise up to take his or her place.

The Terrorists is also like The Penetrator #4: Hijacking Manhattan in how it plays on all the fears of the average mid-1970s middle American – the AFA is mostly made up of blacks and Hispanics and they’re all under twenty and they’re all hippie scum. To make another comparison to yet another forgotten book, they’re like a more military version of the hippie terrorists in Burt Hirschfeld's Father Pig. They start their campaign on New York with the shocking abduction of a banker’s son followed by several massacres in Manhattan, showing absolutely no mercy.

Sergeant Joe Ryker is called onto the case by his captain, who humorously enough proves to be just as willing as Ryker to break the rules in order to see justice. This alone goes against the old “stupid chief” cliché and was fun to see. Actually Ryker’s version of the NYPD operates in a mode far removed from reality, where they can stage raids on supposed hippie terrorist compounds, armed with machine guns and grenade launchers, and then blithely lie to the Mayor’s rep that the hippie terrorists shot first!

I get the feeling that Len banged this one out pretty quickly, probably fueled by some controlled substances. (This isn’t a criticism, it’s something I demand from my pulp writers.) But still Len has a tendency to fill some pages here, especially with lots of stuff in ALL CAPS. He doesn’t give us much of a view on why the Army is like it is – they’re just a bunch of sociopathic hippie scum, and that’s that. He does however play up the lurid quotient, with several scenes of unarmed people getting blown away, tortured, and murdered. Surprisingly though, there isn’t much sex in this one, the first Levinson novel I can say that about.

Ryker comes off as a more likable person here. Rather than the hateful prick of The Hammer of God, the Len Levinson version of Ryker is just a dedicated cop with a knack for goofy humor and a tenedency to stray outside the bounds of the the law. He also has no problem with picking up hookers for the night. Like most other Levinson characters, Ryker lives in a crumbling flophouse sort of place, rides around town in taxis, and gets most of his meals from Chinese takeouts.

When the AFA kidnaps a banker’s son and then mows down a disco filled with clubbing socialites, Ryker gets on the job and starts tracking down clues. This mostly entails meeting up with a young snitch in a 42nd Street porn theater and hobknobbing with a mafioso named Zagari. Along the way Ryker also continues to work on another case, namely the unsolved murder of a circus midget with the great name of Charlie Salt. This subplot really doesn’t add much to the story and comes off like another incident of page-filling, and in fact Len leaves it unresolved at the end of the book.

Ryker himself sees a lot of action, another big difference from the previous volume. He finds the time to lead two assaults on the AFA, gets in a lot of chases, and even manages to collar a pair of juvenile delinquents who break into his apartment and attempt to make off with his color TV and stereo. Again the character has little in common with the DeMille incarnation, and in fact we learn that Levinson’s Ryker was a Marine in Korea and wants to move to China someday so he can eat Chinese food all the time! There’s also a goofy sequence where Ryker, at a Chinese restaurant, overhears some dude calling the cops “fascists” and Ryker tosses his food at the guy.

But the cops sort of are fascists here, going to any means necessary to bring in the AFA. Actually, they just want to kill them all. “Civil rights” have no meaning as Ryker and squads of machine gun-toting cops will storm suspected AFA quarters with no intention of arresting anyone – they just want to waste them. But then the AFA are shown to be such merciless bastards that you want to see them get blown away. Some of it’s too much, though, like when Ryker catches an AFA guy, has the morgue doctor drug him with truth serum, and then blows the guy away in cold blood once he’s revealed the AFA headquarters!

When Ryker wants to go even further than his permissive captain will allow, though, he goes to mob boss Zagari. The two have a friendly sort of “one hand washes the other” relationship, with Zagari giving Ryker underworld intel in exchange for Ryker letting off cronies of Zagari that get arrested. Once Ryker knows where the AFA is, he tells his captain not to worry about it and goes to Zagari, who puts together an army of mobsters. This entails the second of two major raids in the novel (in the first Ryker gets shot in the leg, but manages to walk it off), and goes to even more zany extremes than the first, with the mobsters basically unleashing armageddon on the AFA-run tenement building, blasting it to its foundations.

The goofy humor you’d expect from other Len novels is still here, if a bit subdued. Ryker has a knack for delivering some dumb jokes, particularly one about dope-smoking monkeys. Ryker also has a penchant for pondering things, again as is expected in a Levinson novel. And funnily enough, Ryker is referred to a few times as “Blaze” in the novel. This is something Len spoofed in his must-read The Last Buffoon, with an editor calling his protagonist Frapkin and telling him to change the name of the hero in Frapkin’s latest tough cop novel. This happened to Len in reality; he later wrote an installment of the similar Super Cop Joe Blaze series, and he discussed the name-switching in the interview:

I don't think I consciously based Joe Blaze on Ryker, although they were similar characters. Joe Blaze began as a different already-established Belmot-Tower character, don't remember his name; he probably was a rip-off of Ryker. While I was writing, Peter [McCurtin] called and said BT was spinning off a new cop series, so I should change the name of the main character to Joe Blaze and keep going. So evidently Joe Blaze was a rip-off of a rip-off. I more or less reproduced my conversation with Peter in The Last Buffoon, changing names to protect the innocent or guilty, another example of art imitating life.

This was the only volume of the Ryker series that Len wrote; DeMille returned for the next one, and then the series went over to “Edson T. Hamill,” which I’m guessing was a house name. As mentioned, Len also wrote a Joe Blaze installment, The Thrill Killers, and I’m betting it will be along the same lines as The Terrorists. At any rate I look forward to eventually finding out.

And here’s an interesting postcript to The Terrorists, once again from Len’s interview:

After Nelson became a literary star, his agent Nick Ellison mailed me a legal document with a letter asking me to relinquish my rights to The Terrorists. I signed on the dotted line because I couldn't imagine what could be gained by being a pain in the neck to Nelson.
Posted by Joe Kenney at 6:30 AM