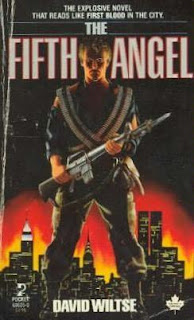 The cover of this mass market paperback edition references First Blood, but The Fifth Angel doesn’t hold a candle to Morrell’s classic novel (twelve years after reading First Blood I still find myself recalling scenes from it). But then, David Wiltse’s novel is more of a thriller/character study sort of thing, more given to dialog and introspection. What can’t be denied is that it has one hell of a premise:

It’s 1979 and Mark Stitzer, a ‘Nam-bred Special Forces badass, is part of a covert team which is being trained to sow terrorism in Moscow in the event of a nuclear assault on the US – in other words, a vengeance strike force. But while on a training mission Stitzer is buried alive for a few days and goes insane. Cut to 1984, and Stitzer has spent the past five years in an insane asylum. He escapes and heads for New York City, which he believes to be Moscow, ready to carry out his objective.

Given this description I envisioned scenes of a Rambo-type stalking around the inner-city streets of New York, blowing away mohawked punks who appeared in his blasted mind’s eye as Russian soldiers. But nothing of the sort occurs within the pages of The Fifth Angel. Unfortunately Wiltse is more concerned with delivering a “real” novel instead of the lurid aciton blitz I wanted. He’s also not concerned with delivering likable characters, either, particularly with our Rambo analogue Stitzer.

One thing that made Morrell’s novel great is that Rambo, despite being a killing machine, was still a character you cared and rooted for, even as he was blowing away redneck cops. Stitzer though is a homicidal maniac. This is of course Wiltse’s intent; his theme is that Stitzer has been trained to be a terrorist by the US military, and now he is loose upon the US itself. But Stitzer has none of the charisma of Rambo, none of his humanity. We never get a sense of who he was before he went insane, other than through the reflections of those he knew, and hence the novel loses the “fallen warrior” angle that could’ve made it so much stronger.

The other characters aren’t much better, mostly because they lack backbone or interest. Carl Thorne shoulders the brunt of the narrative, a young reporter who is Stitzer’s nephew. As the novel progresses we learn there is more to this; Stitzer basically raised Carl from the time he was twelve, after Carl’s parents were killed in a car wreck. Now Carl looks to Stitzer both as an uncle and a father, and still pays him monthly visits in the insane asylum.

I had a hard time figuring out Stitzer’s psychosis, and Wiltse leaves it vague. In fact, we don’t even learn what his training objective was until halfway through the novel. But Stitzer seems to think everyone he sees is a “copy,” and Wiltse infers that Stitzer is now so delusional that he thinks he is in Moscow, surrounded by duplicates of people he once knew and loved, who despite their perfect English and resemblance to his family and friends, are in fact Russians. And then later when he escapes, he clearly knows he’s in upstate New York and must get to New York City…yet somehow he still thinks of it as Moscow??

As I say, it really makes no sense, but I guess that’s a given when you’re dealing with the insane. At any rate this doesn’t stop Stitzer from coldblooded murder once he’s free, pulling stuff that firmly takes him out of the heroic realm. In the course of the narrative he kidnaps a guy, smashes out his teeth so as to fool CSI into thinking they’ve found Stitzer’s teeth, then kills the guy and feeds him to starving dogs. An even more unsettling moment comes when Stitzer, now living undercover in NYC with a lonely woman and her young son (why Stitzer’s doing this Wiltse doesn’t explain), murders both of them when the woman realizes that the man the police are searching for is Stitzer. As the novel progresses Stitzer murders more and more, even blowing up hundreds of people at a New York parade.

What’s frustrating is that throughout it all Carl Thorne can’t let go of his uncle/daddy issues and keeps wanting to stop the Feds from killing Stitzer. And to muddy the waters further, Carl is now sleeping with Stitzer’s ex-wife, aka Carl’s aunt. Not a blood relative, though; she’s only ten years or so older than Carl and married Stitzer long after Carl was being raised by his uncle. Still though this whole romantic triangle storyline is given too much focus in the narrative, Wiltse providing several sex scenes to take up more pages.

About the only interesting character is Stroup, the Trautman to Stitzer’s Rambo. Stroup was the major of Stitzer’s strike force and, to cue the old cliché, “taught him everything he knows.” Retired, Stroup comes in to help the Feds track Stitzer down, telling them they don’t have a chance in hell – they’ll never find him and he’ll kill hundreds, seeing his mission through. Stroup’s a mean bastard and is the only one who appears concerned with stopping the threat that Stitzer poses.

There are precious few action scenes; not until the end does Stitzer, launching an attack on a parade, get hold of a gun, which he uses to blast away a few cops and Feds. Most of his attacks occur “off-camera,” Stitzer planting bombs or poisoning water supplies. But all of this is generally relayed in backstory, and very rarely do we get to see Stitzer at work. The story is mostly told through Carl’s viewpoint, and hence is overlaid with his rampant introspection, doubts, and guilt.

A generally gripping story, with perhaps Stroup hunting after Stitzer, is therefore lost. Proof of this is given with the few scenes from Stroup’s point of view, in particular where he appropriates a shotgun, saws it down to lethal size, and goes out on the streets of NYC to hunt his prey. But again, there are precious few of these scenes, and the eventual Stitzer/Stroup confrontation loses power due to its being relayed from Carl’s wimpy point of view.

Wiltse’s writing is okay, good with the introspection and backstory and florid detail. He is however a wanton POV-hopper, sometimes jumping perspective between characters in the same damn paragraph. This always results in a demerit on my scorecard. He is however good at building tension and suspense; the scene where Stitzer kidnaps a poor security guard and slowly starves him is particularly nightmarish.

But still, I felt that a better novel lurked within this premise. Perhaps the biggest success of The Fifth Angel is that it made me want to re-read First Blood, which I plan to do posthaste.

Also worth noting is that the dust jacket of the original 1985 hardcover edition of The Fifth Angel features a blurb from none other than Burt Hirschfeld.
Posted by Joe Kenney at 6:30 AM