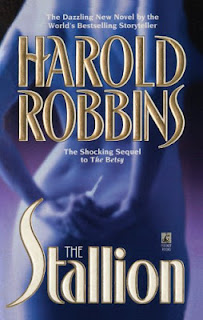 It bears his name, but there’s no way in hell The Stallion is the work of Harold Robbins. I’ve been told that the last novel Robbins himself wrote was 1991’s The Piranhas, and after that the books published before his death in 1997 were actually the work of his last wife, Jann. Even if I hadn’t known that before reading The Stallion it still would’ve been obvious that another author was behind this novel.

For one, the writing is too polished to be Robbins. Too much characterization and scene-setting and topical detail, and also the novel doesn’t appear to be a coke-fueled first draft. But then on the other hand, the writing lacks that weird fire that burns so brightly in Robbins’s real work, and hence comes off as flat and lifeless, something you could never say about Goodbye, Janette or Descent From Xanadu. In fact, The Stallion is incredibly, utterly, irredeemably boring. An outright friggin’ snoozefest on par with Eric Lustbader’s The Ninja.

Anyway, the novel passes itself off as a sequel to Robbins’s earlier bestseller The Betsy. It comes off more like a piece of fan fiction, though. And I guess with Jann Robbins posing as the author, maybe that’s just what it is – the ultimate piece of fan fiction, even published under the original author’s name. In fact it looks like sequels to earlier Robbins novels were Jann’s speciality, given that the first book she produced under the “Harold Robbins” mantle was 1994’s The Raiders, a sequel to Robbin’s first major hit The Carpetbaggers.

But man, if The Raiders is as boring as this, then avoid it like the plague. This novel is just so bad in so many ways. For one, there’s this pedantic need to fill us in on every damn year that passes between The Betsy’s end date of 1972 and The Stallion’s original publication date of 1996, making the book come off like a breathless recap of the years. This alone is different from the real Robbins books, which would just hopscotch between eras, never to the obsessive level of this. I mean, there are “chapters” for years in which absolutely zilch happens, just there so the author could chalk say “1986” off of her list.

The plot is one thing, but the characters are another. They have nothing in common with the people we met in The Betsy. Other than their names, that is. Angelo Perrino, the star and occasional narrator of the previous novel, is here transformed into a Harlequin Romance-style cipher who literally sleeps with every female character in the goddamn book. (And by the way, the entirety of The Stallion is in third-person, so there too goes Robbins’s old penchant for arbitrarily jumping into first-person.)

The character to receive the biggest overhaul is Cindy, who as you’ll recall was a racing car groupie in The Betsy, a coke-snorting, Harold Robbins-type gal who orgasmed at the sound of roaring engines, which she’d blast on genuine quadraphonic speakers. Within the first several pages of The Stallion Cindy is transformed into a completely different character; turns out the “racing groupie” schtick was just a fad, and Cindy’s really a wealthy socialite who just wants to marry Angelo, bear him tons of children, and run an art studio!! Throughout the novel she acts nothing like her character in The Betsy, and it sure doesn’t come off as “character growth;” it just comes off like a totally different character. Which it is.

But (Jann) Robbins isn’t content to stop there. Number Three, aka Loren Hardeman the Third, Angelo’s nemesis, also transforms within the first several pages (which, remember, take place right after The Betsy) into a spineless fop who runs home every night to perform cunnilingus on his new wife Roberta, after which she whips him, Loren of course getting off on the whole bit! You won’t be surprised to know that Roberta is of course a wholly new character, one who manipulates Loren while also working with Angelo on the side, a domineering shrew who is intended as a Jackie Collins-type of character but just comes off as boring.

In fact, female characters take up the brunt of the narrative here, likely due to the female author; they make the decisions, do the deals, and of course, screw Angelo. Betsy, Loren III’s daughter and the inspiration for the previous novel’s titular car, is a case in point; in Harold Robbins’s original novel she appeared sporadically in the narrative, usually as a dope-smoking teen. Yep, she too is overhauled, this time into a determined young woman with an unfailing business acumen who is, guess what, completely in love with Angelo and also manages to have a child by him. (Angelo has a ton of kids in this damn novel; Cindy is also transformed into a veritable baby-machine, churning them out nearly by the dozen.)

Oh yeah, there’s sort of a plot here. Angelo grudgingly goes back to work for the Hardemans (who, remember, had him nearly beaten to friggin’ death in the previous novel), first designing for them a new sports car, and then later the first electric car. That Loren III ordered Angelo’s death in the previous novel is just sort of brushed under the narrative carpet. The storyline is just as flat and boring as the characters, complete with yearly recaps of what’s going on in the automotive world, board room meetings, business room squabblings, and backroom deals.

Here the novel does seem like a genuine Harold Robbins production, as you learn to endure this shit because you know it will get you to the good stuff. And there’s lots of sex in The Stallion, but it’s so boring, so juvenile. Mostly innuendo, with (Jann) Robbins having the characters talk dirty to one another and then fading to black before the action starts. Compare this to the real Robbins, were the sex scenes were so outrageous and unexpected. Because, that’s exactly what the sex is in The Stallion: predictable.

Funnily enough, there’s also a heavy focus, at least in the early chapters, on ass licking. I mean, literal ass licking. But the sadomasochistic stuff with Roberta and Loren III is just boring and cliched, and all of the other scenes are just the same damn thing: some woman, usually Betsy, will make a deal with Angelo, to be capped off by a little friendly screwing, after which the woman will of course tell Angelo that he’s the best she ever had, and from then on the woman will pine for Angelo and do anything to be with him. Betsy will even follow him around the globe, surprising him in his hotel room in the middle of the night, while Angelo’s wife Cindy is back in the States having their umpteenth kid.

And given the pedantic need to fill us in on every damn year, those kids eventually do enter the tale; one of Angelo’s sons for example becomes a model, and (Jann) Robbins wastes more of our time with his boring story. She also wheel-spins with some of the other Perrino brood, as well as bringing us up to date (as if we were expecting postcards) with the rest of the Hardeman clan offspring. It’s all just so tepid and boring and unrelated to anything in the earlier Harold Robbins novel.

So does any of the book have much to do with The Betsy? Sort of. The first quarter of the novel comes off like straight-up fan fiction, devotedly and obsessively filling in all the gaps from the previous book. Like, how long did that old bastard Loren I live? His fate is the only part of The Stallion that seems to come from a true Harold Robbins novel, with his revelation to Betsy on the night of his hundreth birthday that he’s been taping people having sex in his oceanside resort, culminating in his reveal of a tape featuring Betsy herself and Angelo. Betsy does us readers a favor by smothering the old bastard with a pillow, and Number One’s death is written off as a heart attack. But this murder bears hardly any repercussions on the narrative, and the novel never again rises to such trashy heights.

And man, what happened to the drugs??  There is absolutely zero drug use in The Stallion, very strange given that it bears the Harold Robbins by-line. We’re talking here about an author who would deliver characters that would snort coke, smoke dope, and pop amyl nitrate capsules under their noses during sex – and that would just be on a slow day! There’s none of that here, the drugs reduced to alcohol and the occasional cigarette, usually from a post-licked Roberta. As I say, the spark is gone, all the bizarre charm of a true Harold Robbins novel is missing, neutered into your average piece of PC ‘90s dreck.

The funniest thing is that “Harold” dedicates The Stallion to Jann – and if it’s true that she actually wrote this book herself, then that’s pretty damn hilarious. For in reality The Stallion is a total washout, a waste of your time. And it’s odd because it appears that none of the industry reviewers at the time of its publication seemed to realize that this was not the work of the man who’d given the world say The Adventurers; probably they did realize it, they just didn’t give a damn.
Posted by Joe Kenney at 6:30 AM

I've tried to read some of "his" after he died, and they were all very poor substitutes. You really said it right Joe--he had a very rough "fire" that was really fun to read.

You know his very first book, A STONE FOR DANNY FISHER, is truly terrific. Very well-written and it also has that indefinable fire of his. Must have been before he starting getting coked up.

Harold Robins fan fiction? The mind reels....But then I consider all the new DUNE books fan fiction. I don't car if Herbert's son was involved.

that's a sexy cover at least, reminds me of the good old days of eyeballing naughty book covers like that one when my mom would take me with her to Waldenbooks (God rest it's soul) as a kid

Griffin, thanks for the comment, as well as the others you've left on the blog recently. Good to hear someone else out there has memories of going to a Waldenbooks when they were a kid. That's where I bought the majority of my books in the '80s!

Jann Robbins is a friend of mine; she didn't write The Stallion. The last 3 books issued under the name Harold Robbins by Simon and Schuster were written by a hired ghostwriter. Robbins' agent Paul Gitlin made a deal as Robbins was in poor health and couldn't crank out the books like he used to and he needed the money. However, in the last years of his life, Jann encouraged Harold to write another novel. It was The Predators and it was published right after Harold died in 1998 by Forge. In the following years Jann has worked with hired writers to flesh out outlines Harold created during his life. But Jann never wrote his books for him. At most, she typed and cleaned up his later manuscripts because of a stroke he had in the early 80s which at times made it hard for him to write coherently as what he thought would be typed as a different word so she had to clean up the copy a bit.

csquared, thanks a lot for the comment. Please extend my apologies to Jann Robbins for blaming her for this book; I'll update the review. I should've known otherwise, as I've read Jann Robbins helped in some ways with the writing of "Descent From Xanadu," which is by far my favorite Robbins novel yet.

Anyway, whoever did write this book should be ashamed of themselves.