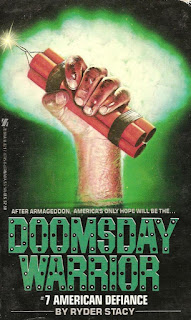 The Doomsday Warrior series is becoming increasingly goofy; while the early volumes equally doled out goofiness and psychedelic New Agery, as the series has progressed the latter has been vastly outweighed by the former. In fact the books have become increasingly juvenile in their execution – still heavy in the sex and violence department, mind you, but delivered in a very clunky fashion.

I still appreciate the series for the fact alone that each volume picks up immediately after the preceding one, with little (if any) recap of what came before. This serves to invoke the feeling of an epic, and what with its heroic protagonists and barbaric setting the Doomsday Warrior has all the makings of a post-nuke myth. But damn it’s just the goofy writing that kills it…of the two authors who served as Ryder Stacy, it’s seeming more and more like the one who delivered the quality writing (like the Glowers stuff in #3: The Last American) has pretty much jumped ship and left the series to the other guy.

American Defiance lacks any of the vaguely psychedelic flourishes of previous volumes and dwells soley on goofy action scenes. But all is not lost; Stacy still provides humorous touches of the bizarre and lots of gore in the action scenes, not to mention corny sex scenes. There are also the obligatory nuke-spawned monsters, this volume seeing perhaps the most monstrous yet, these octopus-like behemoths that rise from beneath the earth and eat humans.

Anyway, Century City is still rebuilding itself after the cataclysmic events of #5: America's Last Declaration, and Ted “Doomsday Warrior/Ultimate American” Rockson has finally gotten back to fighting form after returning to his home base in the previous volume. After a bit of purple-prosed sex with his on-again, off-again girlfriend Rona, Rockson gets word that his true love Kim has been captured by the goddamn Reds. Kim as you’ll recall is the nubile young daughter of Langford, the newly-elected President of the (Re)United States. (That’s really how they refer to themselves.)

From here American Defiance becomes mostly a chase sequence, with Rockson and his team blazing out across the ruins of the midwest and then tracking back to Washington, DC, now the Red capitol of the US. Rona’s left pouting in Century City (and the authors finally have Rona getting a bit pissed that Rockson so casually sleeps with her yet still pines for another woman) as Rockson rushes off to save his true love – of course under the rationalization that Kim and her father would be veritable goldmines of information for the Reds, so they must be rescued before all of their Freefighter secrets can be discovered.

The Red-created mind breakers seen in the earliest volumes return here, with Rockson constantly worried that either Kim or her dad will be hooked up to one and their brains pumped dry. Rockson takes out his usual squad as customary from previous volumes, along with a handful of redshirts who meet the expected end. In some outright deus ex machina one of these guys turns out to be an older dude who happens to have experience in operating trains – not that Rockson brings him along for this reason – which turns out to be super-handy when they later have to commandeer a train!

About halfway through American Defiance I was getting a little bored with the same old nature of the plot…I mean, the stuff with insane KGB leader Killov plotting against depraved Russian US President Zhabnov was fun as always, with the authors taking special delight in making Killov into a total freakshow. But otherwise it was just the same old thing, with Rockson and his boys hauling ass on their “hyrbid” horses over the nuke-blasted ruins of the midwest.

But then the authors throw one of their customary curveballs, with yet another dash of deus ex machina; the surprise appearance of a squad of Australian commandos, who have friggin’ flown all the way over to the US just to help out, and coincidentally enough, just happen to parachute out of their plane right in time to drop them in the path of Rockson’s team! You see what I mean about the juvenile style here? But it’s just so damn goofy and unexpected that you have to go with it, and the Australians do bring a lot of life to the tale. (Unfortunately they aren’t decked out Road Warrior style, instead wearing khaki uniforms and big hats, and they ride about on camels instead of tricked-out muscle cars.)

Meanwhile Kim and her dad are themselves moved about the country, unbeknownst to Rockson. Captured near a Soviet base in the midwest, the father and daughter are then flown to DC under the orders of Zhabnov, who realizes that breaking these two will perhaps put him in the lead in his confrontation with Killov. But Killov himself has moved beyond plotting and launches an attack on the regular Russian army, thus initiating the civil war that has been building since Doomsday Warrior #1.

The attack on the Soviet base in the midwest is nonetheless entertaining, with all of the gore you expect from the series. Here too those monsters come into play, Rockson and the Australians luring them out of their homes in the crevices of the earth and leading them toward the fortifications, which the monsters plow right through. But then Rockson discovers that Kim and her dad aren’t even here, so they turn right back around and head for DC.

Here they commandeer that train, Rockson and his men attacking one Wild West style and taking control of it from the corpulent Red officers who are relaxing onboard. This sequence packs a quite unexpected emotional punch with the appearance of black porters who speak in Uncle Jim-style subservient tones to their Russian masters; when Detroit, the black member of Rock’s team, takes one of them aside to yell at him for his spinelessness, he finds out that there are more to these porters than meets the eye. The dialog the authors provide the head porter here is leagues above anything else in the novel and seems at odds from the narrative because of it.

As expected, it all ends with another action sequence, this time Rockson and team attacking the compound in DC in which Kim and her father are imprisoned. Here we have the first meeting between Rockson and Killov since #2: Red America, as Killov has now taken over DC, Zhabnov fleeing to parts unknown. This culminates though in one of those ultra-lame bits where Rockson could easily waste Killov, but instead just knocks him out and runs away. (True, Rockson later hurls a bomb into the room Killov’s inside, but of course the bastard’s able to get clear before it explodes.)

I almost forgot to mention the second goofy sex scene the authors provide here, almost a straight-up copy of the one back in the second volume, where Rockson is briefly captured in the building with Kim, and the KGB guards for absolutely no reason bring Kim in and fling her inside the cell with Rockson. The two of course immediately go at it, just a they did back in Red America. Kim also implies that she’s been “mistreated” by these Red soldiers, one definite difference from that second volume, where she’d remained untouched, giving herself to Rockson.

Maybe the most promising development of American Defiance is that it ends with Kim heading back to Century City with Rockson; she has never been there and thus has never met Rona, and I’m really looking forward to some sparks flying between these two characters. Meanwhile Langford has been reduced to a vegetable thanks to some mind breaker brain-frying, but then who cares? Everyone knows Ted Rockson’s the star of the show in post-nuke America.
Posted by Joe Kenney at 6:30 AM

Looks like you still have a ways to go with this series. Look like they came out like clockwork, one or two a year, until 1991 - which was sort the apocalypse for this genre.

You're correct, Russell...I don't think I'm even halfway through yet! I couldn't imagine reading the installments of this series back to back, so it's probably best to spread out the reading. I'm curious though how DW will end. I know Jan Stacy, one half of "Ryder Stacy," ended his own post-nuke series "The Last Ranger" by destroying the Earth, "Beneath the Planet of the Apes" style, so we'll see.

The last standing post-nuke pulp though is "Deathlands," from Gold Eagle -- hard to believe they are still publishing a series in which a nuclear war ravaged the Earth in the year 2000. I've tried to read a few of those, but they're too much like Westerns for me -- like a combo of Stephen King's "Gunslinger" stuff and Gold Eagle's Mack Bolan books.