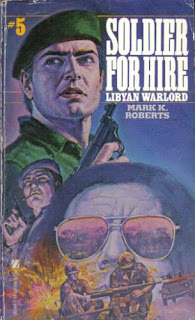 This was the first of four volumes Mark Roberts wrote for the Soldier For Hire series, and it’s just as over the top and Team America-esque as the last one he wrote, #8: Jakarta Coup (which unfortunately was the last volume of the series – Mike Madonna told me that a Zebra editor once informed him that Soldier For Hire was canceled due to low sales, by the way). Libyan Warlord is just as unhinged as that later volume, featuring lots of gory action and goofy but explicit sex, mixed with frequent Right Wing sermons and random rants against commies and liberals.

Our “hero” is JC Stonewall, a white-haired ‘Nam vet who now works as a soldier for hire (he hates the word “mercenary,” by the way, referring to it as a “communist” word). I wonder how Stonewall fared in the hands of the first author who worked on this series, Robert Skimin, for in Roberts’s hands Stonewall is a complete bastard, a loudmouthed know-it-all dick who rants and raves and doesn’t listen to any opinion but his own. He is in every way an awesome spoof of the typical men’s adventure protagonist, but I don’t think Roberts intended him that way.

Also we learn that Stonewall is just an outright murderer. I knew from Jakarta Coup that something happened in Stonewall’s past to make him hate communists so much; here we learn that a squad of Pathet Lao soldiers killed a woman he loved (and was married to?) during the Vietnam war. She was hacked apart and mutilated in horrible ways before dying, and Stonewall gained vengeance by destroying an entire village of suspected Viet Cong supporters, killing “every man, woman, and child.”

This is shocking enough; even more shocking is how Roberts shuffles this under the carpet and instead plays it up that fortune was on Stonewall’s side in that he pulled this before the My Lai massacre – another ‘Nam atrocity that Roberts implies was justified, and was only played up as a “massacre” by the Liberal press – and thus was able to get away with it scott free. There’s a part in Libyan Warlord where Stonewall gets in one of many arguments with Left Wing reporter Melissa Gould, and he uses this butchery of his wife to explain his hatred of commies and liberals…and I always love how these rabidly Right Wing sentiments are always based off of fictional inciting incidents.

Anyway, we get a bit more detail on Stonewall’s operating parameters here. His contact is an older Texas millionaire patriot who goes by the handle “Trojan” and hooks Stonewall up with missions all over the world. The usual deal, those high-priority missions that the regular military can’t handle due to all of the goddamn liberal bureaucrats who get in the way. This time word’s come to Trojan that Qaddafi is currently putting together a nuclear plant somewhere in Libya along with a missile-launching service that could carry out strikes on the US. Helping Qaddafi are a few rogue US soldiers and CIA agents, one of them the infamous Marc Tolliver, an officer in Vietnam who came under fire for openly praising the VC and their methods.

Stonewall’s mission is to destroy the nuclear plant and kill Tolliver and his men. He decides to bring along only one man: Hank Polanski, apparently a muscle-bound type who comes off as a complete clone of Stonewall. I really couldn’t tell them apart, other than that Polanski only has about 10% of the narrative. Also, Polanski prefers to drink beer while Stonewall hammers scotch; indeed Stonewall comes off like quite the lush, always worried about when his Black Label is going to run out.

Much like John Eagle Expeditor #4, Stonewall holes up with some Tuaregs in the desert of Libya and trains them into a strike force. The military feel is not so prevalent here as in Jakarta Coup, parts of which came off like military fiction; the training isn’t given as much focus this time and Roberts instead doles out action scenes more expected of a men’s adventure novel, with Stonewall usually going up solo against Libyan forces while on recon missions or whatnot. However it seems that part of the schtick of this series is Stonewall training native forces in proper military conduct, so there is some of that here.

Stonewall’s weapon of choice this time is a Sidewinder submachine gun, which I couldn’t find much info about online. Roberts actually dedicates Libyan Warlord to the creator of this gun, and has Stonewall enthusing about it throughout the narrative. Roberts also displays his usual gift for in-jokery by mentioning that Stonewall has heard of the Sidewinder before, reading about it in “articles written by that guy Roberts,” ie Mark Roberts himself. (I wonder what magazine this was in??)

And this volume of the series wouldn’t be complete if it didn’t have frequent sex scenes. Stonewall scores with a whopping five ladies this time out, starting with his blonde beauty of a girlfriend (a lawyer who argues with Stonewall over his political views); a stewardess (who does him right there on the plane, drawing some curtains around his first class seat for privacy!); another beauty who happens to work in a consulate in Cairo and throws herself at Stonewall immediately after meeting him; Najeed, the “liberated” daughter of a Tuareg sheik who also throws herself at Stonewall; and finally the liberal reporter Melissa Gould, who garners the most narrative time, arguing long and often with Stonewall over his political views. It’s to Roberts’s credit that he doesn’t have these two go at it until the very end of the novel, even though you know it’s headed that way as soon as Melissa appears and Roberts mentioned that she’s not only, you guessed it, beautiful, but also that she has large breasts, another prerequisite for a guaranteed Stonewall shagging.

One thing I’ve found typical about veteran pulpsters like Roberts is that they have a steady command of their narrative, chugging along and doling out action, sex, topical detail about the environment and customs of whatever place they’re in, and etc, but when it comes to the climax they rush right on through it. Which is to say the finale comes off as too hurried, which is odd given the amount of page-filling stuff earlier in the book about various desert-crossing trips Stonewall takes (all of which feature action scenes, thankfully).

To wit, Roberts basically forgets about Tolliver and his band of turncoats until the very end, having Stonewall deal with them rather quickly. Strangely though, it isn’t until this time that Roberts decides to fill us in on who exactly these guys are, giving us pages-filling backstories that have no bearing on anything. So by the time Roberts gets to the long-simmering Stonewall/Melissa sex scene, he blows right through it in a sentence or two and then has Stonewall back in the US in the very next paragraph. He also just barely remembers to tie up a lingering question about someone who set up Stonewall at the beginning of the novel, but the resolution is pretty great, with Stonewall and Polanski hurling the poor bastard off of a rooftop.

The action scenes occur frequently and are filled with lots of gore, moreso than in Jakarta Coup. Stonewall kills hordes of Libyans with his new toy the Sidewinder, and also gets in a lot of close-quarter fights with an assegai tribal knife he picked up on an earlier adventure. He uses this thing to lop off several heads, and Roberts is sure to provide ample colorful detail about the ensuing carnage. Also worth mentioning is that Roberts is just as enjoyably detailed in the many sex scenes, leaving nothing to the imagination.

These Soldier For Hire books remind me a little of Norman Winski’s The Hitman series, with that same sort of ultra-heroic protagonist and overall goofy vibe. I prefer this series, though, just because Roberts is even more unhinged than Winski, delivering a nutcase “protagonist” who rants and raves against commies and liberals with such venom that he’d even put off Richard Camellion.

So I say again, if you are a fan of the movie Team America, you should check out this series, as it hits many of the same points…only it seems that the author of this one wasn’t being satirical. Which actually just makes it all the more entertaining!
Posted by Joe Kenney at 6:30 AM

I know this is quite an old review at this point, so not sure if you read the early ones, but I'm about halfway through the first book now with the original author and it sounds just as insane. Lots of crazy, random rants mid-scene where "liberal" and "commies" is completely interchangeable, and infinite sex (she just 'knows' has has a monster pecker) and some descriptive torture. It's pretty padded with not a whole lot of action thus far, but it's still quite enjoyable in its insanity.

Thanks for the note! I've never bothered tracking down those early SFH volumes. I suspected Roberts was catering to an already-established template for the series, so thanks for confirming. I was really hoping his later Liberty Corps series would pick up where this one left off, but the first one (the only one I've read so far) was pretty tame.