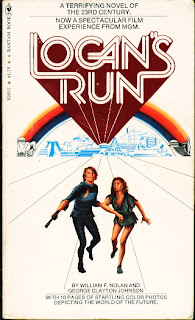 I really enjoy the 1976 film Logan’s Run: the kitsch, the camp value, the retro sci-fi style and design. I’ve even got it on Blu Ray. Mostly though I love how it plays up on the psychedelic fallout of the 1960s, with sequences of hallucinogenic excess – Logan and his friends getting high on some sort of red smoke in Logan’s ultra mod pad, or Logan and Jessica 6 fighting their way through the delirium of the psychedelicizing love mists during their escape from the City.

So imagine my surprise to find none of that stuff in the source novel. This is one of the few cases where I can say the film version is better than the novel -- much better. (Another instance would be 2001: A Space Odyssey.) Published in 1967, Logan’s Run is straight-up pulp sci-fi, 150 pages of clunky narrative and paper-thin characters. It bears little relation to the film other than the theme, but even that is slightly different.

Anyone who has seen the film knows the story: in this ultra-mod 23rd Century, there’s an enforced life cutoff when you reach 30 years of age. As goofy as that concept is, the source novel is even goofier; here the life sentence ends at a mere 21. Obviously then the novel is a wild extrapolation of the Youth Movement of the 1960s, taken to insane and illogical extremes, but still…it’s very hard to imagine a world being run by those under 21. The film was at least slightly more believable in this regard.

We meet Logan as he’s a ripe old 21, soon to experience his LastDay, after which he must voluntarily submit himself to Sleep, ie death. But that’s it, here. None of the Carousel stuff from the film, where LastDay supplicants would put on white costumes with weird hockey masks and walk around, hoping to be zapped and reincarnated (or whatever the hell was going on in that scene). The book does have the famous crystal flower implanted in the hands of each character’s hands, and when they go black the person is ready to die. If they don’t voluntarily go to Sleep, then Logan, a Sandman, is called in to waste them.

Our hero is a bit more troubled in the novel. As you’ll recall in the film version he has a few years added to his life by the City computer, as a ruse to go undercover among the radicals; again, nothing like this is in the novel. Instead, Logan begins to fear his imminent mortality, so he is intrigued by the mention of “Sanctuary” on the lips of a Runner who is killed by gang members before Logan can get to him.

The dead Runner had a twin sister, Jessica 6, and Logan attempts to track her down. This entails a bit of action within the City, which turns out to be Los Angeles, though it is not the self-contained world as seen in the film. The novel operates on a much larger scale, with Logan shuttling around the entire country; the City of the novel is not closed off from the rest of the world like in the movie, and there’s no mention of the world beyond being a nuclear wasteland.

Indeed, we briefly learn that this world of the novel was created by Youth Movement riots, which blew up in 2000, resulting in a mass youth overtaking of the world, with the guru leader of the movement choosing to end his own life at 21, and his acolytes following suit. The unstated idea being that, since old people created the mess that was the 20th century, then an old-free world would be a much more pleasant place.

The authors also have a bit of trouble determining Logan’s motivations. He at first becomes interested in Sanctuary because his own LastDay is fast approaching, but later he mentions that his goal is to find the place and destroy it, so he can go to Sleep in a blaze of glory. Whatever the reason, the novel follows the same angle as the film, here, with Logan following a batch of clues to find the mysterious location that is Sanctuary.

It’s after Logan escapes the City, with Jessica in tow, that the book really veers off into its own thing. For one, Jessica and Logan don’t meet until immediately before they escape; the producers wisely built up their relationship in the film. But as mentioned the novel operates on a broader global sweep, and soon enough Logan and Jessica are taking Mazecars to various destinations, from an abandoned factory beneath the sea to a spot in the midwest upon which stands a colossal statue of an American Indian warrior.

The narrative portion here seems excised from the material that came before. Logan’s quest is lost for a bit and it becomes a sequence of unrelated action scenes, Logan and Jess showing up at some abandoned spot, meeting the locals, and getting into a battle. And sadly these action scenes are pretty dumb, not to mention goofy, particularly one where they meet a teenage gang that could’ve come straight out of Doomsday Warrior, their 16 year-old Attila the Hun giving Logan a trio of gorgeous women in exchange for a night with Jessica. (Humorously enough, while Logan partakes of the favor, Jessica keeps the gang leader at bay.)

Along the way Logan and Jessica are followed by Francis, Logan’s former Sandman colleague. Jessica and Logan meanwhile develop the expected feelings for one another, but the authors don’t have anything happen between them, despite their vows of love for each other late in the game. The romance element is just as harried and dashed off as the action.

In the ruins of Washington, DC Logan meets Ballard, legendary leader of the Runners, an actual “old” man at 42. But unlike in the film he’s not some wizened sage, and instead tries to kill Logan, just for being a Sandman. Another escape, more unrelated action stuff, and Logan and Jessica end up in the Florida Keys, where they discover that “Sanctuary” is a space station orbiting around Mars, and Francis is really Ballard (who poses in various Cities to monitor potential Sanctuary candidates), and Logan and Jessica hop on board the rocket and it takes off. The end.

So then, none of the payoff stuff from the film is here – no triumphant return to the City, no confrontation with the diseased computer which runs the place. Like I wrote above, the film is just so much better thought out and entertaining, and publisher Bantam doesn’t help out the authors by inserting 16 pages of photos from the film in glorious color into the book; one can’t help but compare these shots – which detail incidents that don’t even occur in the novel – to the book itself, and find the book lacking.

William Nolan penned the sequel by himself: Logan’s World, which not-so-coincidentally was published in 1976, the year the film came out. He followed this up with Logan’s Search in 1980. During a trip to a local used bookstore the other day I picked up all three novels for a pittance; I’ve read that Logan’s World in particular is in a men's adventure novel vein, so I’m looking forward to it.

If you'd like to see a similar concept given much better treatment, be sure to check out Peter Breggin's After The Good War.
Posted by Joe Kenney at 6:30 AM

I think it's interesting that you prefer the film to the book because I absolutely loathe the movie and love the book. Logan's Run the film completely misses the point at every turn and presents a far less interesting world. There's some great stuff in the book that never made the transition and the movie is poorer for it.

That said, I will warn you that the two sequels are wretched.

Released the summer I turned 14, for a year or so Logan's Run was my favourite film. I owned the book, but couldn't make it through the 150 pages.

Perhaps it's unfair for me to comment further on the novel, but I've always wondered why 21 and not thirty? Not only does the younger age seem more improbable - really a world taken over by teenagers - but "Don't /Never trust anyone over 60" was a slogan of the Youth Movement. Thirty seems such a logical cut-off.

As for the Marvel Comic and later TV series: Also wretched.

Per what Sam said, I have seen a number of positive reviews of the book: particularly positive in relation to the movie.

My guess is that a lot depends on how much you like the movie.

I don't recall particularly liking the movie, but it was so long ago, I couldn't really tell you why.

I would add to your list of sci-fi films that were far better than their source material, Planet of the Apes.

The Boulle novel was okay, but Rod Serling's screenplay was exciting bordering on epic.

I'll agree with Brian here. In fact, I would argue that science fiction movies are often better than their source material. Films based on littérature, on the other hand, almost always fall short.

That said, I now find Logan's Run, once my favourite film, almost unwatchable. Worse than the book? I can't say.

I still revel in Logan's Run the movie. I like 1970s sci-fi with remnants of psychedelia there coupled with the post apocalyptic cynicism of the 1970s.

I have the trilogy on my Kindle, but have not yet read it.

Thanks all for the comments, I enjoyed reading the differing opinions on the book and the film. I still prefer the movie, really for all the reasons people make fun of it. It's just so goofy and retro you can't help but enjoy it. Probably the strangest thing is that it was filmed here in Dallas! (As was Robocop...in fact I once worked with a dude who was an extra in Robocop; he played two roles -- the first as one of the orderlies who wheeled in Peter Weller after his character was blasted apart, before he became Robocop; and the second as a gangmember who was blown away by Robocop. Pretty ironic, really...)

I like to think your old workmate played not two roles but one: an orderly gone bad.

And of course there was the wretched TV series.

the premise makes a lot more sense in the movie

I can't remember if they state it outright, but it's clear if you read between the lines that the people lived in a dome city because of a nuclear war, hence the need for people to die at 30 because they have limited space and limited resources and nowhere else to go, hence the need for population control

however, so much time passed that the outside world was restored, but the maniacal computer in charge of running the place was unaware

Another enjoyable review, but you’ve misstated or misinterpreted what happens with Logan’s lifeclock in the movie—he’s not given more years, he’s given fewer years in order to make it appear he’s approaching Last Day, thus making him a plausible runner.
I completely agree that the film is better. I still like it because of nostalgia, because of the production design, and because it was one of the last idea-centered science fiction movies made before Star Wars changed it all.